News Staff
If a study has 229 trials and there are only 12 false positives, that is a good result.

That happened, with dogs, detecting laurel wilt-affected wood from avocado trees. Man's best friend showed capability of high level performance, even in harsh weather conditions such as high heat and humidity. Thanks to the surge in popularity among younger people (and those who choose to ruin sushi) avocado is the second-largest tree crop in Florida behind citrus. But laurel wilt disease, here thanks to an an invasive species (the redbay ambrosia beetle) which arrived here from Asia in untreated wooden packing material, has resulted in the death of more than 300 million laurel trees in the United States, which includes the avocado tree.

The disease has had a devastating effect on the industry in South Florida in past harvest seasons, and two larger avocado industries in Mexico and California are naturally worried that this disease, if it hits their crops, could spread fast enough to destroy their seasons. 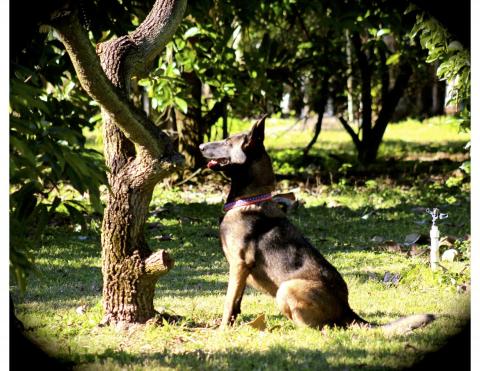 Credit:
DeEtta Mills
The problem is that once external symptoms are evident, this disease is very difficult to control and contain as the pathogen can spread to adjacent trees via root grafting. Until now, there has been no viable, cost-effective method of early diagnosis and treatment.

Science will find a long-term solution, assuming environmentalists don't block it in court, but until then the use of scent-discriminating dogs may offer the avocado industry hope in the fight against nature trying to kill us all again.

The highly sensitive canine olfactory system is capable of detecting odor concentrations at exceedingly minute 1 to 2 parts per trillion - so trace even homeopaths would object to such a tiny amount. That is why canines are extensively used in law enforcement and forensics in the location of missing persons, explosives, drugs, weapons, and ammunition. They have also demonstrated the ability to detect invasive species of spotted knapweed, brown tree snakes, desert tortoises, and various cancers.

So three dogs were trained and studied for their ability to detect the early presence of laurel wilt by scent.  As mentioned above, during the course of the study, 229 trials were performed, and only 12 of those yielded false alerts.

Man's Best Friend may soon be a best friend to Florida agriculture too.
News Articles
More Articles All Articles
About