Google Lab-Bred Mosquitoes May Stop Diseases Without Pesticides
By Hank Campbell | May 4th 2020 09:31 AM | Print | E-mail

Hank Campbell
A new series of experiments by an Alphabet (the parent company Google created) group shows lab-bred mosquitoes that cannot successfully reproduce might be able to stop malaria and other mosquito-spread diseases in countries where those are still endemic - two billion people per year.

Malaria is not endemic to the U.S. any more and we can thank DDT for that but we still face risk of numerous diseases from mosquitoes.  Other countries where diseases like dengue, chikungunya, Zika, and yellow fever are common barely blink at the coronavirus pandemic that has paralyzed the U.S. after only causing as many deaths as a bad flu year. But infectious diseases can always spread. How would we manage dengue and malaria today?

Politician William Ruckelshaus overruled scientists and banned DDT in the U.S. and though it is still in use in other countries (our Environmental Protection Agency literally writes the manual for how to spray it in homes in other countries) DDT is the poster child of the anti-science movement, so it is not coming back here. Instead, biologists have been looking for ways to eliminate the ecologically useless mosquitoes that spread these diseases using genetic engineering. OxiTec, for example, created a mosquito that can't successfully create offspring. When they first tried testing, U.S. opponents were out in full force(1) but that was before coronavirus caused all those people on the coasts who ordinarily distrust science to embrace it again.(2) While 'Science Is A Vast Corporate Conspiracy' types still buy Non-GMO Project cat litter, most Americans are once again fans of Clorox, Purell, and Lysol. This might be a good time for Google to push ahead with a GMO mosquito to stop diseases that kill a lot more each year than COVID-19 ever will.

Their sterile insect technique uses Wolbachia bacteria and MosquitoMate, the inventor of the Verily group mosquito, did a small test of 80,000 mosquitoes per day in three neighborhoods between April and October of 2018. During the testing period, raps in areas without Wolbachia-infected males had between 8-18X as many biting females as those with the genetically engineered kind. Overall, suppression was 93 percent. 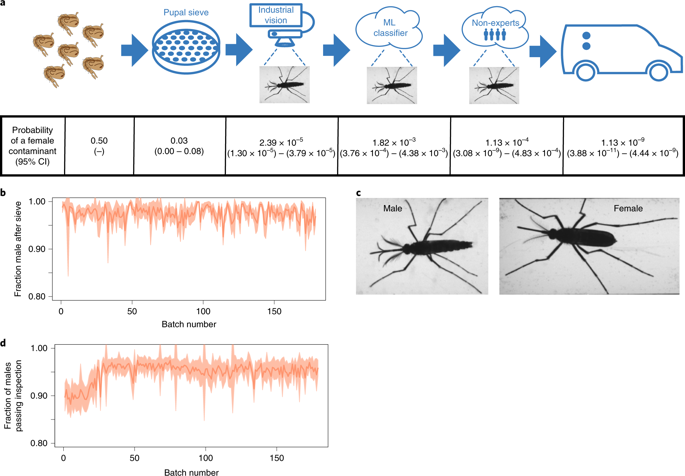 a, Illustration of the entire sex-sorting pipeline, including the mechanical pupal sieve, real-time adult visual inspection, cloud-based machine learning classifier, and non-expert review. The probability of a female contaminant with 95% CIs for each step is shown along with the estimated overall female contamination rate for the entire pipeline in the final column. b, The fraction of mosquitoes imaged by the sex sorter after the pupal sieve that were male with s.d. intervals shaded for 179 production batches. c, Example images from the adult sex sorter (male on the left and female on the right) used by both the industrial vision system and machine learning classifier. d, The fraction of true males that were correctly labeled and accepted by the Industrial Vision system with s.d. interval shaded (n = mean of 96, range of 10–140 independent sex-sorter lane measurements per batch).

Activist ecologists stuck in that 'balance of nature' mythology scientifically debunked a century ago shriek when other scientists note we could just wipe those mosquitoes out. Aedes aegypti mosquitoes are ecologically useless, there is nothing positive they do that 3,500 other known species of mosquitoes could not do if one pest were eliminated as disease vectors. Biologists have shown they can cut the population by preventing reproduction without any of the worries about pesticides that get promoted.

It's worth pursuing. In the U.S., where family members are not dying from these diseases, it is easy to claim no mosquito control technique should be allowed because somewhere in the multiverse this might cause harm, but these cannot reproduce, there are no Frankenbugs. Even rich elites can understand that fact.

(1) In the Los Angeles Times I had to debunk a wealthy (naturally) real estate agent in Florida, who insisted a genetically engineered OxiTec mosquito that could not reproduce was nonetheless a slippery slope to Frankenbugs.

Such nomenclature proceeds from the same false premise that activists misunderstand about ecology. Frankenstein's monster was not a GMO, he was a hybrid grafted together. Not only would he be certified organic today, Non-GMO Project would sell Frankenstein a sticker for it, and it would be just as legitimate as the Non-GMO Rock Salt, Non-GMO Artificial Sweetener, and 67,000 other ridiculous products they make a fortune promoting for anyone who sends a check.

(2)  The activists who oppose vaccines, GMOs, natural gas, etc. are now trying to claim coronavirus was caused by pesticides and 5G cell phone coverage (no, really) and of course Robert F. Kennedy, Jr. is their prophet but it is instead likely that COVID-19 will caused a surge in science acceptance. In 2008 President Obama said he was unsure vaccines were safe despite the science consensus and during the 2009 H1N1 pandemic his administation was criticized for not allowing multi-dose vials of the vaccine - because they contained  the preservative thimerosal. 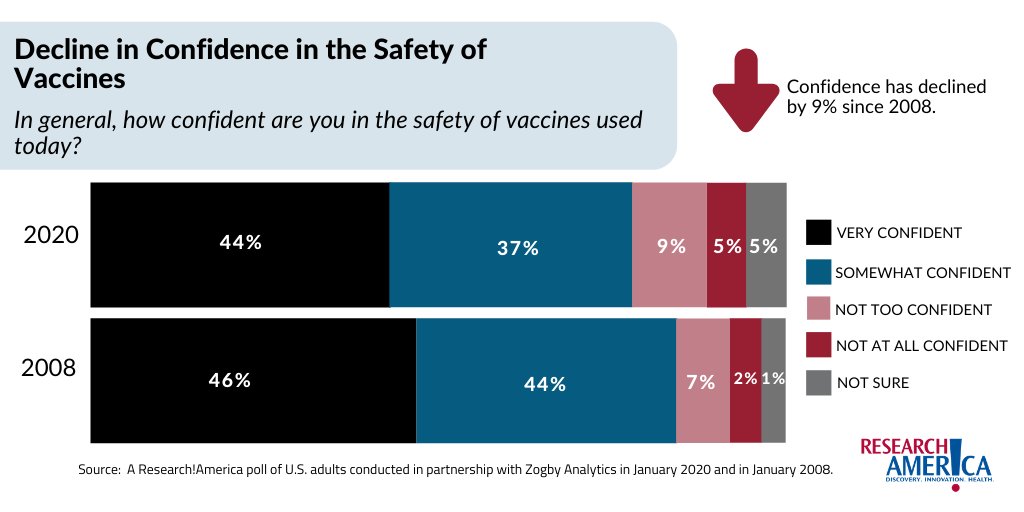 Vaccine confidence dropped 9% after that but even California, the American home of the anti-vac movement, passed a law banning capricious vaccine exemptions. Governor Gavin Newsom signed it under protest because he is from San Francisco, but he signed it.
Science 2.0
More Articles All Articles
About