The two finalists pared down from 12 are Comet Astrobiology Exploration Sample Return (CAESAR), which seeks to bring back a sample from 67P/Churyumov-Gerasimenko, a comet that was successfully explored by the European Space Agency’s Rosetta spacecraft, to determine its origin and history. Led by Steve Squyres of Cornell University in Ithaca, New York, CAESAR would be managed by NASA’s Goddard Space Flight Center in Greenbelt, Maryland.

The second concept is a drone-like rotorcraft - a helicopter -  that would explore the prebiotic chemistry and habitability of dozens of sites on Saturn’s second largest moon Titan, an ocean world in our solar system. Elizabeth Turtle from the Johns Hopkins University Applied Physics Laboratory (APL) in Laurel, Maryland, is the lead investigator, with APL providing project management.

The selected mission will be the fourth in NASA’s New Frontiers portfolio, a series of principal investigator-led planetary science investigations that fall under a development cost cap of approximately $850 million. Its predecessors are the New Horizons mission to Pluto and a Kuiper Belt object known as 2014 MU69, the Juno mission to Jupiter, and OSIRIS-REx, which will rendezvous with and return a sample of the asteroid Bennu. The call for concepts was limited to six mission themes: comet surface sample return, lunar south pole-Aitken Basin sample return, ocean worlds (Titan and/or Enceladus), Saturn probe, Trojan asteroid tour and rendezvous, and Venus in situ explorer.

Researchers are understandably excited and expressed it in the most 2017 way possible. On Twitter: 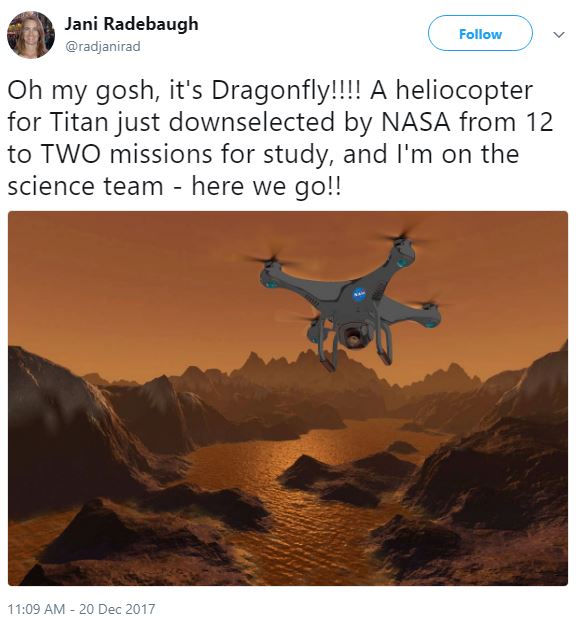 The CAESAR and Dragonfly missions will receive funding through the end of 2018 to further develop and mature their concepts. NASA plans to select one of these investigations in the spring of 2019 to continue on to subsequent mission phases.

The concepts were chosen from 12 proposals submitted in April under a New Frontiers program announcement of opportunity.

NASA also announced the selection of two mission concepts that will receive technology development funds to prepare them for future mission competitions.

The concepts selected for technology development are:

Led by Lori Glaze at Goddard, the VICI mission concept will further develop the Venus Element and Mineralogy Camera to operate under the harsh conditions on Venus. The instrument uses lasers on a lander to measure the mineralogy and elemental composition of rocks on the surface of Venus.