Changes in spring surface air temperature can vary widely and even impact socioeconomics in developing countries so it will be important to learn how to predict the variations of spring temperatures. However, the dynamics and predictability of East Asian temperatures during boreal spring are more challenging compared to those in the other seasons.

Part of the difficulty is due to the spring predictability barrier. The predictive skill based on El Niño-Southern Oscillation decreases rapidly during boreal spring. For as long as climate change has been a concern El Niño has been considered a confounder.

East Asia experienced an unusually warm spring in 2018, when exceptionally high surface air temperatures were recorded in large areas of Asia. To get answers, the team investigated the spatiotemporal patterns of the record-breaking temperatures in East Asia in spring 2018 based on ERA-Interim reanalysis data. Their research linked East Asian extreme heat in boreal spring to North Atlantic SST anomalies. 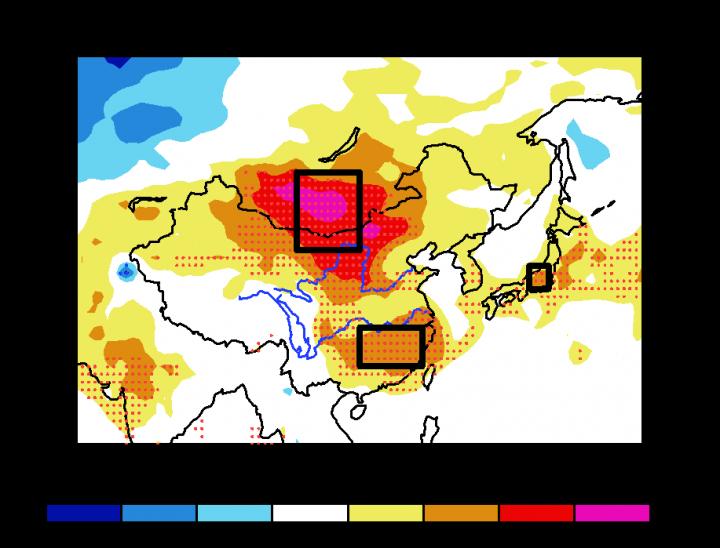 The results indicated that the tripole mode of North Atlantic SST anomalies can trigger anomalous Rossby wave trains over the North Atlantic and Eurasia through modulating the North Atlantic baroclinic instability, which then propagate eastwards and induce anomalously high pressure and anticyclonic circulation over East Asia, leading to descending motion, reduced precipitation, and increased surface solar radiation, which were favorable for the record-breaking warmth in East Asia during spring 2018.

"The intensity of ENSO usually peaks during boreal autumn and winter, and tends to decay remarkably during boreal spring, leading to a reduced predictability of climate and weather in East Asia during this period. However, the ENSO signal during 2017/18 was weak, and so it is interesting to explore whether other antecedent signals (in addition to ENSO) existed that could have been applied to predict the warm East Asia in spring 2018," Dr. Kaiqiang Deng, a climate researcher who works with Prof. Song Yang in the School of Atmospheric Sciences, Sun Yat-sen University, and the first author of the paper recently published in Atmospheric and Oceanic Science Letters.