Whether dubbed “climate extremes” or “global weirding”, we have been witnessing some surprising and concerning weather events. In Europe, seasons seem to be changing, but not consistently. Since the turn of the millennium, the UK in particular has experienced record-breaking summer heatwaves, extraordinary rainfall in different seasons, and winters extreme in both warmth and cold. Something seems wrong, and we don’t have a complete understanding of what is going on.

In 2003, much of western Europe endured the hottest summer on record and July 2006 was the hottest month ever recorded in England – both periods were defined as heatwaves. A sinking feeling. Morebyless, CC BY

From 2007 onwards, the UK ran into a sequence of relatively cool, wet summers, with exceptional rainfall and widespread flooding in 2007 and 2012.

Winters have been likewise variable. Mild winters dominated the 2000s until a sequence of two remarkably cold and snowy seasons in 2009-10 and 2010-11. The epic stormy winter of 2013-14 then saw destructive waves at coastlines around the western UK and record rainfall in southern England.

Most recently, in late 2015, the UK experienced exceptionally mild conditions, accompanied in November and December by record-breaking rainfall and devastating floods. December 2015 was the warmest on record in central England (these records date back to 1659), and also smashed previous records in Germany and Switzerland. This coincided with exceptional December warmth along the East Coast of the US with cities like New York and Boston experiencing their warmest Christmas on record.

Many of the above are warm weather events, the sort you might expect to happen more frequently thanks to our changing climate. However, the extent to which standing records have been shattered – in such a short space of time – is astounding. This suggests some sort of regional effect may have amplified the extremes experienced around the North Atlantic. So what’s behind all this extreme weather? Some have sought links to changes in the Arctic, in the tropics, or in solar activity. And all of these do influence the “jet stream” high in the atmosphere that guides and drives weather over Europe and North America.

But there’s a more local factor: temperature patterns in the North Atlantic. To appreciate the extent and speed of recent changes, consider these maps of some recent sea surface temperature anomalies. Since our climate has warmed, the anomalies are calculated relative to a “new normal” – average conditions over the millennium to date (2000-15), rather than earlier cooler times. This emphasises the recent warm-cool swings. 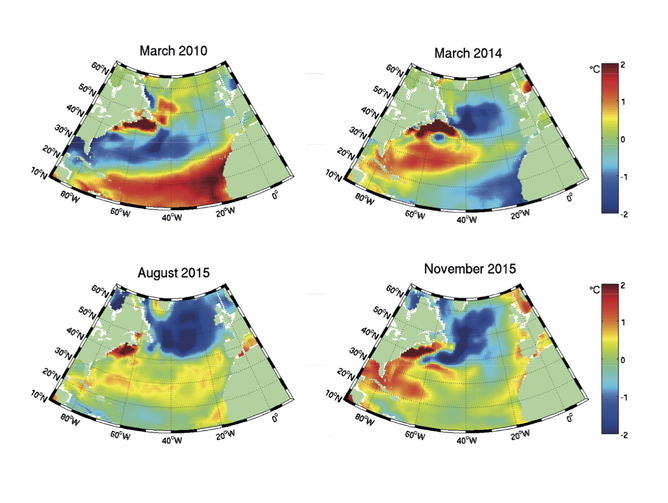 We’ve witnessed striking changes. The winter of 2009-10 saw the development of a classic “tripole” pattern comprising positive (warm) anomalies in the tropics and subpolar latitudes, sandwiching negative (cool) anomalies in between. The temperature anomalies were clearly established by the end of that winter, in March 2010. This well-known pattern disappeared at the ocean surface through summer 2010, but persisted beneath the waves and re-emerged in the early winter of 2010-11.

The “tripole” partly explains the UK’s record low temperatures and snowfall during those two winters, by helping to establish weaker low and high pressure centres around Iceland and the Azores respectively. With this change in pressure pattern, the UK is more dominated by cold Arctic and Eurasian air.

Very different conditions unfolded through winter 2013-14. By March 2014, a “cold patch” had developed in the Atlantic south of Greenland. It proved resilient. The cold patch again survived summer and not only re-emerged but remarkably intensified through last year, peaking in August, and persisting into November and December of 2015. In fact, across the two hottest years on record, that region of the Atlantic has stood out for actually being colder than usual.

This has a big knock-on effect elsewhere. The cold patch may have displaced and invigorated the jet stream and exposed the UK to a flow of mild and moist Atlantic air from the south-west, which links it to the very unusual recent weather.

It’s not just the UK, either. These changes in the Atlantic coincided with extremes across eastern North America and Europe – those warm Christmases – though other influences, such as the current El Niño, are clearly important too. 2015 was hot … but not in the North Atlantic. Scientific Visualization Studio/Goddard Space Flight Center/NASA

It’s too early to say how much the Atlantic may have influenced strange weather elsewhere, but anomalous warmth in the western subtropics and the Gulf of Mexico late last year is also noteworthy, and may be linked to those balmy conditions in the eastern US.

Changes in weather extremes are both breathtaking in scale and serious in consequence. And it’ll get worse before it gets better. Despite agreements aimed at limiting global warming to 2°C, we still face dangerous climate variability. As shown in the maps above, rapid “unseasonal” temperature fluctuations already often exceed 1-2°C across large regions of the North Atlantic.

So as the world warms, we are carefully monitoring our oceans, and how they are interacting with the atmosphere – this is key to a better understanding of extreme weather and seasonal predictions. There has never been a more important time to get to grips with our volatile climate.

By Robert Marsh, Professor of Oceanography and Climate, University of Southampton and Joël Hirschi, Senior Researcher - Ocean and Climate, National Oceanography Centre. This article was originally published on The Conversation. Read the original article.