News Staff
Leeches are found on every continent in freshwater habitats where there is little flow. They are popular bait for fishing, and doctors continue to use them in medical treatments. Environmentalists have even been using them to advance their beliefs that trace levels of "endocrine disrupting" chemicals are harmful.

What is known about leech reproduction is that they are hermaphroditic, so they have both male and female sex organs, and some families of leeches demonstrate protrandry (they start life as a male and then change into a female), while others self-fertilize, brood eggs and show what could be considered parental care. Others cross-fertilize with other leeches, sometimes implanting sperm in one or both of the partners' body walls and sometimes directly introducing sperm into a genital pore with a penis. Their reproductive cycle also varies across families, with some only reproducing one time in their life, and others reproducing multiple times in their lifespan.

But it's the big unknown, environmental contaminants, that are the reason for a new paper. Like everything, leeches are harmed by high doses of metals in aquatic systems but what about at trace levels? Though claims of endocrine disrupting chemicals are dismissed as another term for homeopathy in much of the science community, for 25 years some groups have been trying to claim there is a u-shaped curve of effect. Harm at high levels, nothing at normal levels, but the curve of harm going up again at minute levels. 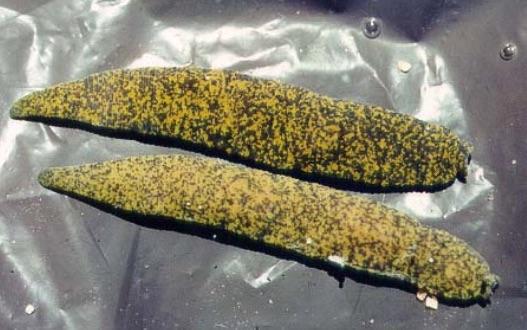 Leeches live in places that can be real pools of contaminants, since they are often literally pools. The new paper looked at how estrogen might impact species abundance, egg production, growth rates and gonad size. Synthetic estrogen (17α-estradiol - EE2) is used in oral contraceptives and can enter an aquatic system when they are not completely broken down in wastewater treatment plants. The compound EE2in high doses can have profound effects on fathead minnows, collapsing their population, and occasionally affected amphibian hatching success and gonad development. However, little attention ha given to the effect of EE2 on leech communities.

In the study, EE2 had no impact on the abundance of leeches, but there was "increased condition in one species and some changes in relative gonad sizes of reproductive organs" though that could be because there was an increase in their food supply of other invertebrates, an indirect effect of EE2 linked to reduced fish numbers. For the leech species H. marmorata, the weight of the epididymis (a duct behind the testes) and the sperm sac size decreased, but the length of the testes, prostrate and penis sheath increased in exposed individuals. Likewise, EE2-exposed leeches were associated with growth in ovisac and albumen and vaginal bulb lengths. However, these leeches showed few individual-level and no population- or community-level responses, suggesting that they are much less sensitive to this endocrine disruptor.

There had been some thought that leeches may be an ideal study species for assessing contaminant effects - as noted above, they are sensitive to metals and ubiquitous - but, this study suggests that they may be less responsive to endocrine disrupting compounds, such as EE2.
News Articles
More Articles All Articles
About