News Staff
At the Applied Networking Research Workshop, a meeting of the Association for Computing Machinery, the Internet Society and the Institute of Electrical and Electronics Engineers, one group claimed critical communications infrastructure, buried fiber optic cable, could be submerged by rising seas in as soon as 15 years.

They estimate that by the year 2033 more than 4,000 miles of buried fiber optic conduit will be underwater and more than 1,100 traffic hubs will be surrounded by water. The most susceptible U.S. cities are predictably New York, Miami and Seattle.

Their model combined data from the Internet Atlas, a comprehensive global map of the internet’s physical structure, and projections of sea level incursion from the National Oceanic and Atmospheric Administration (NOAA). 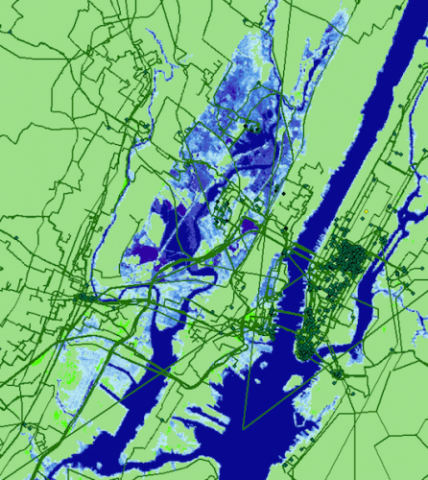 Much of this infrastructure is buried and follows long-established rights of way, typically paralleling highways and coastlines, said senior author Paul Barford, a University of Wisconsin–Madison professor of computer science.Barford. “When it was built 20–25 years ago, no thought was given to climate change.”

Global warming rose to national prominence 30 years ago, and the famous hockey stick claim was made 20 years ago, so it is unclear why he believes no one thought about climate change.

Many of the conduits at risk are already close to sea level and only a slight rise in ocean levels due to melting polar ice and thermal expansion as climate warms will be needed to expose buried fiber optic cables to sea water. Hints of the problems to come, says Barford, can be seen in the catastrophic storm surges and flooding that accompanied hurricanes Sandy and Katrina.

Buried fiber optic cables are designed to be water-resistant, but unlike the marine cables that ferry data from continent to continent under the ocean, they are not waterproof.