News Staff
Though we've learned a lot about evolution in the last 150 years, when it comes to the details, some fundamental questions remain unanswered. Such as when and how extremely diverse groups of animals such as reptiles first evolved. For seventy-five years, adaptive radiation, the relatively fast evolution of many species from a single common ancestor, has been considered a major cause of biological diversity.

This has even been for the origins of major body plans (structural and developmental characteristics that identify a group of animals) and new lineages. Yet examining these rapid rates of evolution has been constrained by the methods used and the amount of data available.

A new study examined the largest available data set of living and extinct major reptile groups (such as marine reptiles, turtles, lizards, and the ancestors of dinosaurs and crocodiles) to tackle the longstanding question of how adaptive radiations have shaped reptile evolution. Using DNA information from modern species and hundreds of anatomical features from both modern and fossil species for statistical analysis, the study detected that periods of fast anatomical change during the origin of reptile groups often predate when those groups diversified into hundreds or thousands of species. This contradicts long-held ideas of adaptive radiation in evolution biology. 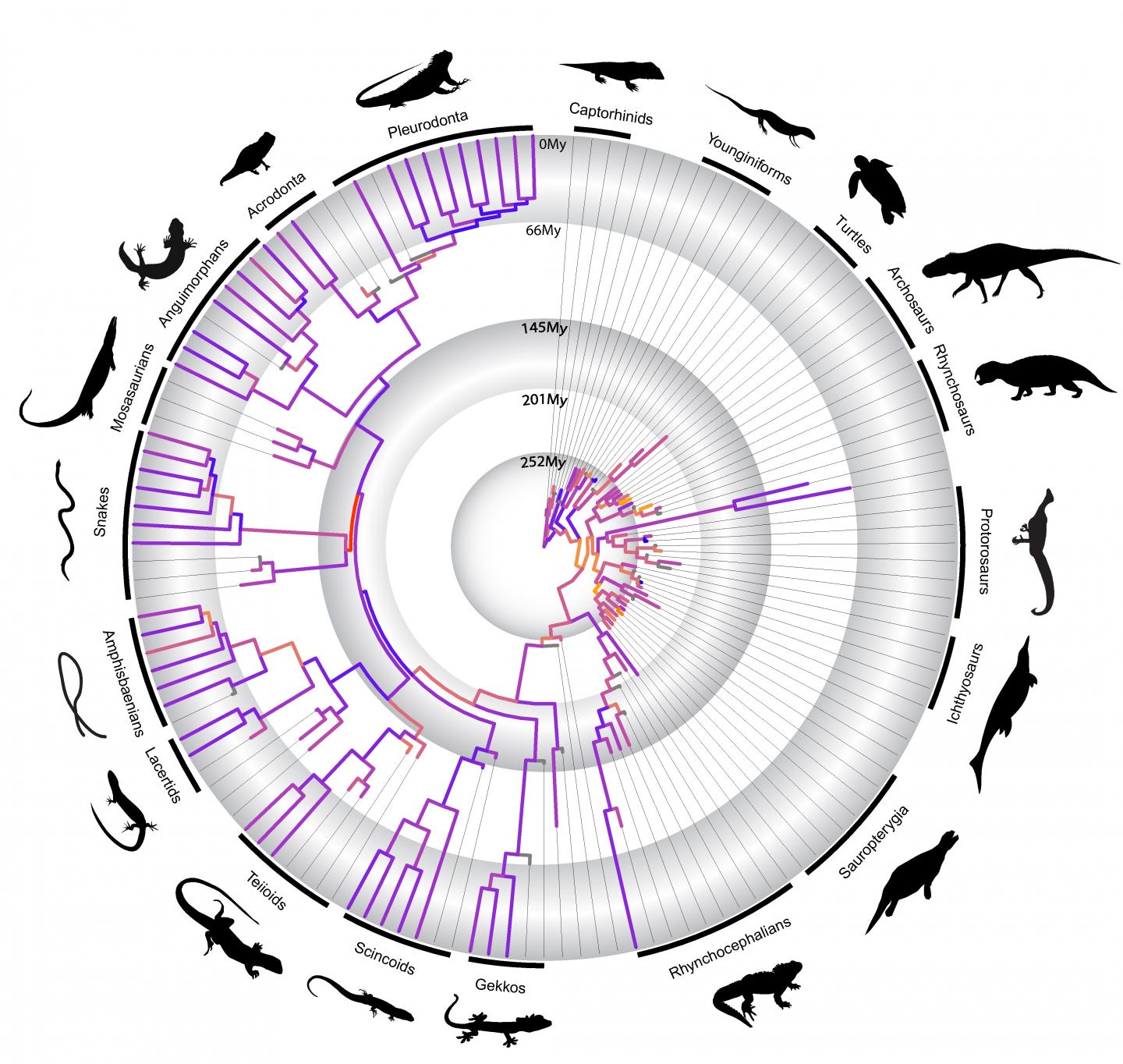 "Our findings suggest that the origin of the major reptile groups, both living and extinct, was marked by very fast rates of anatomical change, but that high rates of evolution do not necessarily align with taxonomic diversification" said first author Dr. Tiago Simões, Postdoctoral Fellow at Harvard University.

The work revealed that rates of evolution and morphological variety in reptiles prior to the Permian-Triassic Mass Extinction - the biggest mass extinction of all time - were equally high, or even higher, than after the event. As reptile species diversity was much lower during the Permian compared to Triassic, these results indicate that fast rates of evolution do not need to coincide with rapid taxonomic diversification as predicted by the classical theory of adaptive radiation. The two can be decoupled.

They also discovered that accelerated rates of evolution correspond to the origin of unique reptile body plans, but that very similar functional adaptations in reptiles can arise through varying rates of evolution.

Rreptiles that evolved similar protective armour like turtles or serpentine bodies like snakes, show radically different rates of evolution, indicating the origin and evolution of unique body plans is heterogeneous through evolution.

"Our results also show that the origin of snakes is characterized by the fastest rates of anatomical change in the history of reptile evolution," said Simões. "But, that this does not coincide with increases in taxonomic diversity [as predicted by adaptive radiations] or high rates of molecular evolution."

The mismatch between morphological and molecular evolution supports the idea that protein coding DNA sequences do not seem to be correlated with broad-scale changes in anatomy. Although much more research is needed to understand how body plans evolve, the team hypothesizes that non-protein coding regions of the genome may be responsible for rapid morphological change, as these parts are more free to mutate and take on new functional roles.

"It is clear to us that to advance our understanding of the major patterns in evolution we need further studies capable of measuring phenotypic and molecular evolutionary rates, times of origin, and phenotypic diversity across large timescales" said Simões.