News Staff
Florida's citrus industry has been struggling with citrus greening, also known as Huanglongbing (HLB), a disease caused by a bacterium called Candidatus Liberibacter asiaticus (CLas) that destroys fruit production and eventually kills the tree. An effective cure using antibiotics and breeding has not happened, and crop production is declining steadily.

A group of researchers are using lasers on citrus leaves. When used with the right settings, could greatly improve the success of antibiotic treatments currently being looked into as a way to stop the deadliest plant disease in Florida's history.

The bacterium, spread by insects who get the sap, starves trees by attacking the vascular tissue responsible for transporting sugars to developing roots and fruits. Bitter, green, inedible fruits result, and once they appear it is only a matter of time before the tree dies. The susceptible vascular tissue, called the phloem, is the innermost layer of bark. Antibiotics have been unsuccessful because of the inability to effectively introduce such substances into the phloem. The disease kills trees from the inside out and now some scientists are trying to fight it from the outside in. 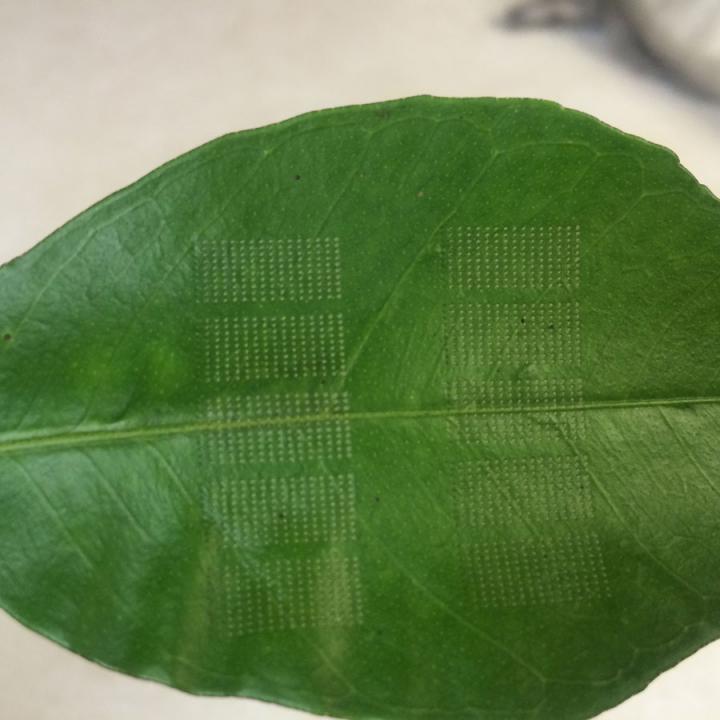 The laser beam creates microscopic indentations of approximately 250 μm in diameter. Depending on exposure, the indentation can be as little as a single cell layer deep. The researchers tested two-year-old 'Valencia' orange trees grown in large pots in a greenhouse. They applied test solutions immediately after laser treating the leaves, and examined how far the solutions traveled within each plant using specific fluorescent dyes. Applications of oils on leaf tissue after laser exposure prevented damage.

"For large-scale field applications, a scaled-up and more flexible model of the instrument containing multiple nozzles for the laser light, antimicrobial spray, and wax application is being developed. The overall system offers the added advantage of lower application frequencies and hence reduction in chemical use, a condition that lessens environmental impact," explains Ed Etxeberria, a plant physiology professor at The University of Florida's Citrus Research and Education Center.