News Staff
Though bees can live for years, their mating period is brief so male honeybees use a bee version of Flunitrazepam (Rohypnol - colloquially roofies) to improve their chances of being the successful dad. They inject vision-imparing toxins during sex that cause temporary blindness in females and keep them from flying off to other males.

The toxins identified in a new study are proteins contained in male bees' seminal fluid which helps maintain sperm. All honeybees make these proteins, though some may make more of it than others, and honeybee seminal fluid toxins can not only kill the sperm of rivals, it can cause temporary blindness, it turns out.

The genesis of the study was UC Riverside professor of entomology Boris Baer noting that if bumblebee queens were injected only with the fluid and not the sperm during insemination, the queens stopped mating and became increasingly aggressive toward males. He wanted to understand why. 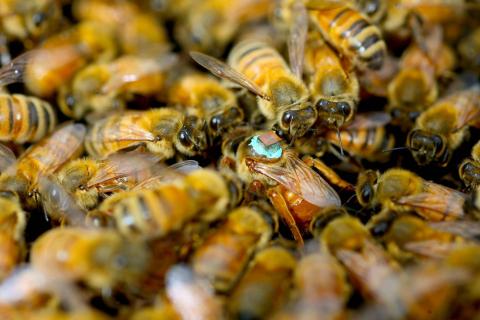 If males wanted to insure their offspring would win, keeping her from flying would accomplish that. If she cannot see, she cannot fly. This sounds like an evolutionary stretch but anything is possible. Roughly 10 years ago, Baer and colleagues began analyzing which proteins could be found in honeybees' fluids.

"We found at least 300 of these 'James Bonds,' little secret agents with specific missions," he said.

It was no great thing to find a protein that attacks the sperm of other males, as this is found in other insects, but a protein that impacts genes responsible for vision in the queen's brains was interesting

To test whether the protein had this effect, Baer's team presented inseminated queens with a flickering light, and measured her response to it via tiny electrodes in her brain. The vision and corresponding flight-impairing effects kick in within hours, but Baer notes that it is likely reversible in the long term because queens do tend to fly successfully later in life when they establish new colonies.
News Articles
More Articles All Articles
About