News Staff
Evolution will happen, in medicines like antibiotics, and in crop protection like herbicides. Though some groups may continue to use older, less effective products such as organic copper sulfate, evidence-based agriculture works to create new products that do less environmental damage, such as neonicotinoids.

Critics of science argue that because mutations happen there is no point, new research will only create some new class of "superweeds" but it turns out the mutations are not happening as readily as we've been led to believe by detractors, at least in one plant. 70 million grain amaranth seeds exposed to a soil-based herbicide didn't lead to even a single herbicide-resistant mutant. These results suggest that the mutation rate in amaranth is very low, and that low-level herbicide application contributes little - if anything - to the onset of new mutations conferring resistance. So existing herbicides will continue to be effective and safe. 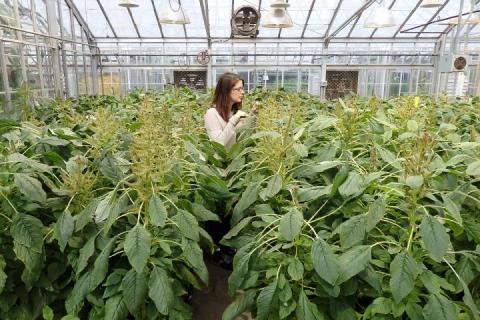 Weeds. A lot of weeds. Photo courtesy of Patrick Tranel

It will happen, even if a chemical does not cause it. Mutations increase genetic diversity, which can be useful to a species' survival. It can happen using completely naturally high energy cosmic rays. Any major stress that does not kill a plant can contribute to genetic mutations in its seeds and pollen. Eventually, an individual weed will develope has the right mutation that allows it to survive a particular herbicide and that individual will survive and pass the trait to its progeny.

But media reports in outlets like The Guardian, the official newspaper of the anti-agriculture community, make it sound like this is routine. In reality the baseline mutation rate is a broad range so scientists wanted to test whether herbicide applications that failed to kill the plant increased the baseline rate they had. Theyused Amaranthus hypochondriacus, which is closely related to several agricultural weeds but is not known to harbor herbicide-resistance genes. Using a greenhouse to isolate their experiments from potential contamination from other Amaranthus species, the team cultivated this one plant, collected its seeds and began the long process of growing generations of related plants and harvesting the seeds.

To screen the seeds for herbicide resistance, the researchers spread them over the surface of soil treated with a type of herbicide known as an ALS inhibitor, then waited to see whether any of the seedlings survived. Very few of the test plants overcame the herbicide treatment. Rigorous testing revealed that those rare plants that did survive were the offspring of seeds of weedy amaranth species that already carried the resistance genes.

"Herbicide resistance is an evolutionary process, and evolutionary processes are mathematical," said University of Illinois crop sciences professor Patrick Tranel, who led the new research. "If you know more precisely how plants will behave under different environmental conditions, you can develop equations that will predict how fast resistance will evolve." If, as the study suggests, the mutation rate is much lower than expected, it doesn't mean that herbicide resistance will not occur, he said. "It may be that resistance happens a bit more slowly than previously thought," he said. "But it will still occur."

They just won't be superweeds, no matter what activists writing in The Guardian may tell you.
News Articles
More Articles All Articles
About