News Staff
What would it take to grow potatoes or tomatoes in space? Some mycorrhiza, it turns out.

Currently NASA can't even get a telescope into space without being wildly over budget and 10 years behind schedule so they are not putting colonies on the moon any time soon. But the private sector might. And if that is going to be more than the plot of a film, it will take agriculture.

We could ship nutrient-rich soil and fertilizers up into space, a high economic which might be worthwhile. Pioneers could then cultivate crops in situ. A bolder scientific option might be the process of mycorrhiza, a symbiotic association between fungi and plant roots. In this symbiosis, the fungal hyphae supply the plant roots with additional water, nitrogen, phosphates and trace elements from the ground. In return they get access to sugar and fat produced by the plant. This symbiosis is stimulated by hormones of the strigolactone family, which most plants secrete into the soil around their roots. 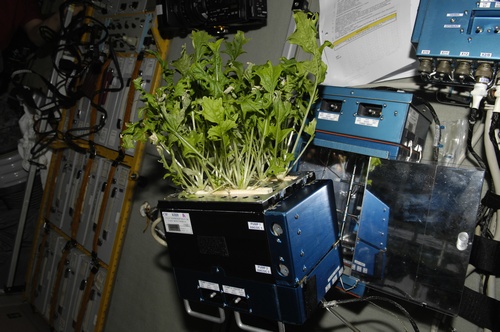 Mizuna lettuce growing aboard the International Space Station before being harvested and frozen for return to Earth. Image credit: NASA

The process of mycorrhization can greatly increase plant growth and thereby substantially improve crop yields – especially in soil that is low in nutrients - according to a recent study. Lack of nutrients in soil is one thing, but what about microgravity? In order to investigate the influence of such an environment on plant growth, the researchers cultivated petunias and mycorrhizal fungi under simulated low gravity conditions. Petunias provide a model organism for plants of the nightshade family (Solanaceae), which include for example tomatoes, potatoes and eggplants.

The experiments revealed that microgravity hindered the mycorrhization and thus reduced the petunias’ uptake of nutrients from the soil. But the plant hormone strigolactone can counteract this negative effect. Plants that secreted high levels of strigolactone and fungi which the researchers had treated with a synthetic strigolactone hormone were able to thrive in the low-nutrient soil despite the microgravity conditions.