News Staff
Fast Radio Bursts (FRBs) are millisecond-long bursts of radiation recorded on radio waves. They are extremely powerful - for example, during one of the brightest flashes lasting five milliseconds, as much energy is radiated as our Sun generates in a month. The scale of the phenomenon is difficult to imagine. A new study tracks down their source.

The first radio bursts were "discovered" barely 15 years ago. Until April 2020, all the FRBs observed by astronomers came from cosmological distances of hundreds of millions of light years. It was only two years ago that they also managed to track flashes originating in our Galaxy. It is important to note that due to the equipment and associated sensitivity limit, researchers are only able to observe the most luminous objects in the Universe, the most powerful bursts.

"FRBs are currently one of the hottest topics in contemporary astrophysics. Discovered accidentally in 2007 during a review of archival data, and currently under intensive observation, they are still a great mystery," explains dr Marcin Gawronski from the Institute of Astronomy at the Faculty of Physics, Astronomy and Informatics Nicolaus Copernicus University (Torun, Poland). "The results gathered so far make it possible to divide the FRB phenomena into different classes, but we still have not found out whether they are emanations of one or many separate physical processes." 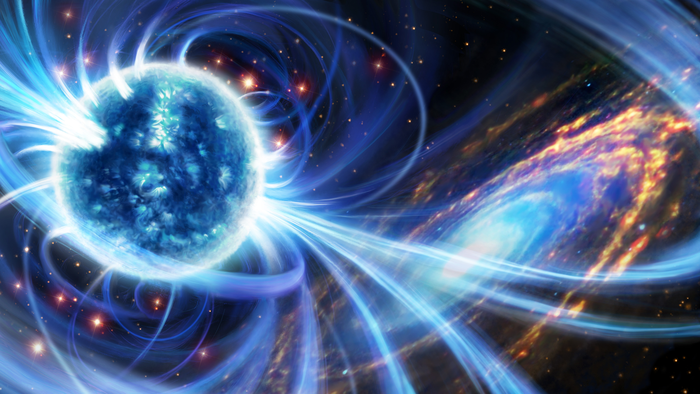 Researchers are not 100 percent sure what causes the bursts. Astrophysicists have various hypotheses that could explain their formation, including the existence of extraterrestrial civilisations. However, so far magnetars have been considered to be the source of FRBs.

- Magnetars are neutron stars with extremely strong magnetic fields, they are formed after supernova explosions - says dr Gawronski. - So far, scientists have agreed that they are responsible for the FRBs. Why? Because in order to produce an FRB, it is necessary to have a huge amount of energy, which can be quickly released and used in various processes. The only sources of this type known to us are either the magnetic fields of a cluster of neutron stars - these magnetars - or the gravitational energy of black holes.

Although astronomers agree that fast radio flashes are the result of violent processes occurring in the immediate vicinity of highly magnetised neutron stars, it is still unclear why most of them appear as single signals, while other sources can be observed on radio waves repeatedly. In some cases, the bursts are additionally characterised by periodic activity, i.e., they occur at regular time intervals. This, however, only helps in planning observations.

There are also quite a few difficulties that astronomers have to deal with in FRB observations. - Studying FRB activity is very difficult because flashes are random phenomena. It seems a bit like fishing - we cast a fishing rod and wait. So, we set up radio telescopes and we have to wait patiently - says dr Gawronski. - Another problem is that radio telescopes "see" quite a large field of the sky, e.g., ours in Piwnice covers an area half the size of the Moon's disk in the radio band, which we usually use for FRB observations. There are many objects over such a large area, so it is difficult to pinpoint one particular flash. Another issue is the enormous amount of data that we collect during such observations - we can record up to 4 gigabits of data per second, so we need very large storage capacities. So, we have to process, analyse and delete this data on an ongoing basis to make room for the next.

As you can see, there are many puzzles and difficulties connected with fast radio bursts Astrophysicists are working on models to explain this phenomenon, but the recent discovery, in which dr Marcin Gawroñski also participated, brings yet another mystery to be solved.

- It is a huge and close to us galaxy, similar to the Milky Way - it is located about 12 million light years away from us, in summer when the weather is good you can see it with a regular set of binoculars, and e.g., with the Hubble telescope you can observe single stars in it - explains dr Gawronski. - Canadians from the CHIME project told us that there was a source of fast radio bursts in the vicinity of this galaxy, and what's more, some of its properties indicated that this object was related to the M81. We thought it would be a great opportunity to try to find out what specifically generated the FRBs.

The observations were made by researchers working primarily in the PRECISE consortium.

- This is a team of researchers whose main objective is to locate FRB sources, estimate the distances to them and study the properties of the environment in which FRBs are placed. In this way, we can try to say something about the evolution of the sources of fast bursts and the very processes in which FRB objects are generated - says dr Gawronski. - In a sense, we act in parallel to EVN (European Very Long Baseline Interferometry Network - editor's note), as we try to gather European radio telescopes outside the time allocated for standard observations within this consortium, to which, of course, the NCU Institute of Asronomy belongs together with the RT4 radio telescope.

The researchers are very lucky. The first time they pointed their radio telescopes at the vicinity of the M81 galaxy, they found a series of four bursts. It wasn't long before they caught two more. However, the new findings came as a surprise to the researchers.

- When we saw the first results, we could not believe it, and at first, we even thought that we had made a calculation error. It turned out that we had not. It was like in the Monty Python's sketch - 'Nobody expects the Spanish Inquisition'. Because none of us expected such a thing - says dr Gawronski.

A young one among the old?

Firstly, the burst came from a globular cluster. So, the first disappointment came at the beginning - a cluster of this type consists of a huge number of densely packed stars, so it was impossible to pinpoint the specific object that was the source of the FRB, even with the help of the Hubble orbiting telescope. More interestingly, globular clusters are composed of very old stars, formed up to 10 billion years ago - they are the oldest star systems in the galaxies. It is therefore futile to look for "young" magnetars there.

- Many questions came to our minds: where did the magnetar come from there? We assumed that it must have been the source of the bursts. In fact, the magnetar could not have been there. And if it was, it could not have been formed in a classical way, i.e., following an explosion of a massive star - explains dr Gawronski - Such massive stars live for a very short time and within an estimated time of several tens of millions of years after their formation they end their lives in a very impressive phenomenon, called a supernova explosion. It is known that stars do not form in globular clusters for a long time, so no new magnetars can form there during a supernova phenomenon.