News Staff
When we think of agriculture, we don't think of nomadic hunter-gatherers who simply followed nature rather than harnessing it.

But they engaged in trade also. Millet, originally domesticated in China, was likely consumed at low levels by pastoralists inhabiting the far-flung regions of Siberia and southeastern Kazakhstan, possibly as early as the late third millennium but with the expansion of trans-regional networks across the steppe, when objects and ideas were first regularly exchanged over long-distances, millet consumption began to increase.

A thousand years it was a staple of pastoralist diets. This also coincides with the appearance of more complex political structures at the transition to the Iron Age. Regional ocio-political powerhouses led to an increase in the exchange of costly prestige goods, which strengthened political networks - which led to more trade, including cultigens; plant species with no known wild ancestor. 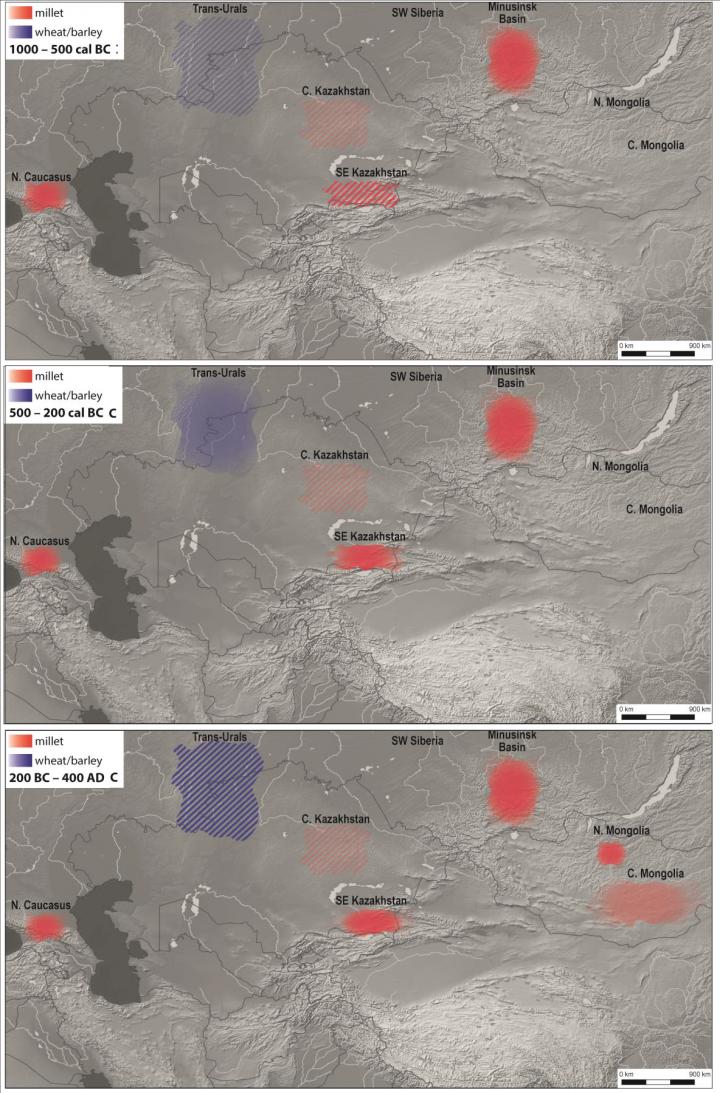 Wheat and Barley cross the Trans-Urals

Yet farther west, groups in the Trans-Urals invested in wheat and barley farming rather than millet. Why? It could have been greater water availability, a higher value on those cultigens, or just popularity. Whatever the basis, such cultigens went from rare luxury during the Bronze Age to a sign of prestige in political networks during the Iron Age.

This link was all made using a meta-analysis of dietary information recorded in the bones of ancient animals and humans recovered from sites scattered across the Eurasian steppe, from the Caucasus region to Mongolia. Researchers used stable isotopic data and quantitative analyses to calibrate human dietary intake against environmental inputs, which allowed them to better isolate the timing of the incorporation of agricultural products into the diets of pastoral nomads and, crucially, link burgeoning socio-political networks to this dietary transformation.

Why some took up cultigens and others did not remains a mystery. Herding of livestock became common even though not all regions adopted millet, which means meat was the most prized food and domestication became a tool of prosperity. Southwest Siberiia stuck with pastoral animal products and locally available wild plants and fish and went nowhere but adoption of millet by populations in Mongolia during the Late Iron Age coincides with the rise of the Xiongnu nomadic empire.
News Articles
More Articles All Articles
About