Grasses Have Been Genetically Modifying For Millenia - By Stealing
By News Staff | February 20th 2019 09:50 AM | Print | E-mail

News Staff
Grasses have been able to short cut evolution by taking genes from their neighbors, finds a new study.

Since Darwin, much of the theory of evolution has been based on common descent, where natural selection acts on the genes passed from parent to offspring. But sometimes what seems to be natural selection is really artificial, like lateral gene transfer that allows organisms to bypass evolution and skip to the front of the queue by using genes that they acquire from distantly related species. Even by stealing them.

Scientists look at grasses because they include many of the most cultivated crops worldwide such as: wheat, maize, rice, barley, sorghum and sugar cane. The PNAS paper explains how scientists sequenced and assembled the genome of the grass Alloteropsis semialata. A. semialata is found across Africa, Asia and Australia so researchers compared it with approximately 150 other grasses (including rice, maize, millets, barley, bamboo etc.). They identified genes in A. semialata that were laterally acquired by comparing the similarity of the DNA sequences that make up the genes. 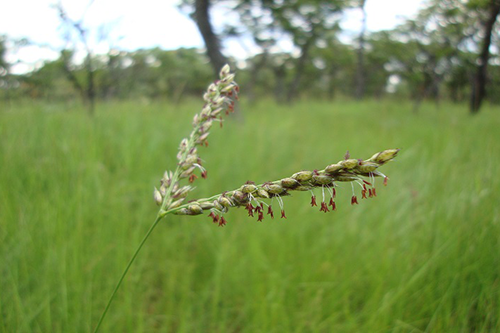 "They are acting as a sponge, absorbing useful genetic information from their neighbors to out compete their relatives and survive in hostile habitats without putting in the millions of years it usually takes to evolve these adaptations, "said Dr Luke Dunning of the University of Sheffield. "Counterfeiting genes is giving the grasses huge advantages and helping them to adapt to their surrounding environment and survive -- and this research also shows that it is not just restricted to Alloteropsis semialata as we detected it in a wide range of other grass species."

Activists are against all modern agricultural science and one argument they use is that genes could escape from Genetically Modified crops and create so called “super-weeds”, like if genes from GM crops transfer into local wild plants, making them herbicide resistant. But mutagenesis, bathing plants in chemicals and radiation to force mutations, and hybrids have the same resistance future, that's what evolution is. It's why we will always need new pesticides. And copper sulfate, the default organic weedkiller, requires so much more toxic stuff because of resistance, and new products are not created to combat it in the organic manufacturing process.