News Staff
A new paper has implicated a physiologic mechanism in vegetation as a cause for Arctic warming.

The "greenhouse effect" is well-known by now, water vapor that plants emit during photosynthesis serves to lower land surface temperature, similar watering the yard on a hot day, but it can lead to a rise in air temperature.

The new paper finds that the Arctic temperature rises when the moisture released by plants is reduced due to the increase of carbon dioxide (CO2 ) in the atmosphere. The increase in atmospheric CO2 concentration closes the pores (stomata) of plants in high-latitude areas and reduces their transpiration, which they find ultimately accelerates Arctic warming.

Plants take in CO2 and emit oxygen through photosynthesis. During this process, the stomata of leaves open to absorb CO2 in the air and release moisture at the same time. When the CO2 concentration rises, plants can absorb enough CO2 without opening their stomata widely. If the stomata open narrowly, the amount of water vapor released also decreases. When this transpiration of plants declines, the land temperature rapidly rises under greenhouse warming. Recently, such a decrease in transpiration has been cited as one of the reasons for the surge in heat waves in the northern hemisphere. 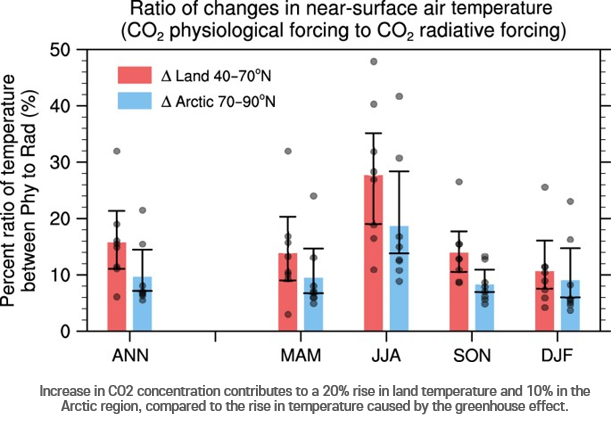 This response from the vegetation leads to the global climate change by controlling the exchange of energy between the surface and atmosphere, referred to as 'physiological forcing.' But so far, no study has confirmed the effects of physiological forcing on the Arctic climate system.

The joint research team analyzed Earth system models (ESM) simulations and believe that the increase in CO2 leads to stomatal closure in land vegetation causing land warming, which in turn remotely speeds up Artic warming through an atmospheric circulation and positive feedback in Earth systems process.

In addition, a quantitative estimate of the stomatal closure's effect on Arctic warming due to increased CO2 showed that about 10% of the greenhouse effect is caused by this physiological forcing. This stomatal closure effect due to the increased CO2 levels is not adequately factored into current estimates of future climate scenarios.
News Articles
More Articles All Articles
About