Psychologists Set Out To Conquer Anti-Science Beliefs About GMOs. Here's What Happened
By News Staff | June 4th 2019 10:38 AM | Print | E-mail

News Staff
Though every world science body sees no reason to be concerned about genetic engineering - hundreds of millions of humans and billions of animals have been fine with a gene in one plant that is simply found naturally in another plant, as you'd expect - well funded activist campaigns about "Frankenfoods" have largely succeeded. Organic food has ballooned in revenue using claims it claims no GMOs all while not mentioning their own less precise genetic engineering; mutagenesis, bathing organisms in chemicals and radiation to get a desired effect.

Knowing that fear about GMOs while believing Mutagenesis was health food makes no sense, a team of psychologists and biologists from the University of Rochester, the University of Amsterdam in the Netherlands, and Cardiff University in Wales, set out to discover if the schism could be overcome; that is, to see if consumers' attitudes would change if the public understood the underlying science better. They wanted to test the "deficit model" of accepting science, that if people had better information, they would change their minds.

To the surprise of many in science who have been frustrated that the public has been easily duped by groups raising money scaremongering food, the result was successful. At a time when 80 percent of people believe their food should have no genes, which is impossible, and many believe non-GMO rock salt is a valid purchase, it wouldn't seem like more data helps. 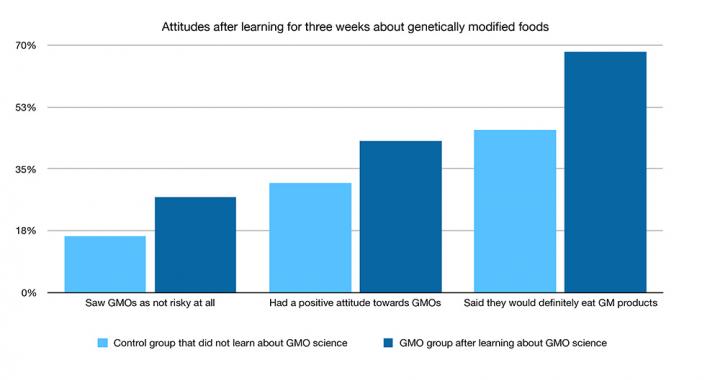 Yet it did. In a series of studies, the team discovered that people's existing knowledge about GM food is the greatest determining factor of their attitudes towards the food--overriding all other tested factors. Existing GM knowledge was more than 19 times higher as a determinant than the influence of demographic factors such as a person's education, socioeconomic status, race, age, and gender.

The team replicated the U.S. findings in the United Kingdom and the Netherlands, where resistance to GMOs (and now CRISPR, but still not Mutagenesis) is much higher than in the United States, which has led to much highly regulations over the objections of farmers and scientists there.

In one study, using a representative U.S. sample, participants responded on a scale of 1 (don't care if foods have been genetically modified), 2 (willing to eat, but prefer unmodified foods), to 3 (will not eat genetically modified foods). Next, the team asked 11 general science literacy questions--such as whether the universe began with a huge explosion, antibiotics kill viruses as well as bacteria, electrons are smaller than atoms, and how long it takes for the earth to orbit the sun. In study 2, participants took an additional quiz about their knowledge about the science, methods, and benefits of GM foods and procedures.

The team found that specific knowledge about GM foods and procedures is independent from a person's general science knowledge--making the first (GM knowledge) a nearly twice as strong predictor of GM attitudes.

The researchers followed up by conducting a five-week longitudinal study with 231 undergraduates in the US to test, first, if a lack of knowledge about GM foods could be overcome by teaching participants the basic science behind GM technology, and second, if greater knowledge would alter attitudes. McPhetres worked with Rochester colleague Jennifer Brisson, an associate biology professor, who vetted the students' learning materials.

The team discovered that learning the underlying science led to more positive attitudes towards genetically modified foods, a greater willingness to eat them, and a lowered perception of GM foods as risky.

Their findings, argues the team, lend direct support for the deficit model of science attitudes, which--in broad terms--holds that the public's skepticism towards science and technology is largely due to a lack of understanding, or absence of pertinent information.

The team's online modules avoid confrontational approaches "which threaten preexisting beliefs and convictions," suggesting a relatively simple guide for how to overcome

"Political orientation and demographics inform attitudes and we can't change those," says lead author and University of Rochester psychologist Jonathon McPhetres, PhD, "But we can teach people about the science behind GMOs, and that seems to be effective in allowing people to make more informed decisions about the products that they use or avoid."
News Articles
More Articles All Articles
About