Raiders Of The Lost Arawaks: Columbus Was Not Exaggerating About Caribbean Cannibalism
By News Staff | January 10th 2020 07:29 AM | Print | E-mail

News Staff
When Christopher Columbus discovered a continent unknown to Europeans, his accounts included harrowing descriptions of native pirates who cannibalized men and kept women as sex slaves, but more recent humanities scholars, even ones who readily accept oral histories long changed, dismissed that as myth.

However, the belief stuck. He had no reason to lie, the Spaniards didn't know they had a new continent and didn't colonize it until that realization happened.

New science studies show he may have been accurate. Analysis of the skulls of early Caribbean inhabitants show biological relationships between various groups takes just-so stories about how the islands were first colonized into the realm of data. It shows that Carib cannibals had to have invaded Jamaica, Hispaniola and the Bahamas, debunking 50 years of dismissals of Columbus by claiming they never made it farther north than Guadeloupe.

When Columbus recounted his voyages, he noted that peaceful Arawaks in modern-day Bahamas were terrorized by cannibal pirates he referred to as "Caniba," the Asiatic subjects of the Grand Khan. Like everyone, he didn't realize at first this was a separate continent and it wasn't until Spanish explorers reached the other side that they found they had stumbled upon a truly new world.

His Spanish successors corrected the name to "Caribe" as a distinction and later social scientists chalked up the references to confusion: Caribs could not have gone to the Bahamas when their closest outpost, in limited evidence, was nearly 1,000 miles to the south.

Biology, as often happens, fills in gaps that the archaeological record cannot. 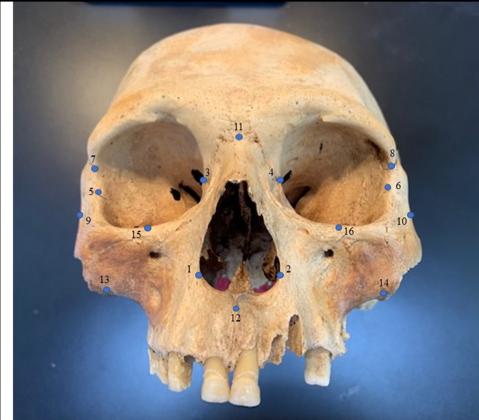 Using 3D facial landmarks as a genetic proxy in early Caribbean inhabitants can show how closely people groups were related to one another. Image: Ann Ross/North Carolina State University

Face to face with the teeth of the Caribbean earliest inhabitants

Though artifacts such as tools and pottery provide important insight into ancient people, both those and fossils provide limited windows into the past, because it takes a confluence of events to get the good fortune to both preserve and find them. There are not many wood building artifacts from the 1700s in the U.S., for example, because people repurposed everything.

A recent analysis of Amazon warriors along the Don, in southern Russia, was only possible because ancient looters had missed a chamber in the underground tomb. Because of their luck, a biological component is able to bring region's history into sharper focus, providing more than just stories by Greeks and Persians.

This new analysis used used 3-D facial "landmarks," such as the size of an eye socket or length of a nose, a genetic proxy for determining how closely people are related to one another, to analyze more than 100 skulls dating from about A.D. 800 to 1542. It revealed three distinct Caribbean people groups and their migration routes over time. Looking at ancient faces shows the Caribbean's earliest settlers came from the Yucatan, moving into Cuba and the Northern Antilles, which supports a previous hypothesis based on similarities in stone tools. Arawak speakers from coastal Colombia and Venezuela migrated to Puerto Rico between 800 and 200 B.C., a journey also documented in pottery.

The earliest inhabitants of the Bahamas and Hispaniola, however, were not from Cuba as commonly believed, but the Northwest Amazon - they were the Caribs. Around A.D. 800, they pushed north into Hispaniola and Jamaica and then the Bahamas where they were well established by the time Columbus arrived.

This solves the puzzle of why a type of pottery known as Meillacoid appears in Hispaniola by A.D. 800, Jamaica around 900 and the Bahamas around 1000. The sudden appearance of this Meillacoid pottery so different from everything else, shows that after a 1,000-year period of tranquility, the people were getting shuffled.

Carib invaders were on the move. And there is no question they were cannibals.

Did cannibalism lead Spain to switch from benevolent visitor to dictator?

The Spanish monarchy initially insisted that indigenous people be paid for work and they were treated with respect. Numerous stories of how they refused to convert to Christianity and ate human flesh returned to the continent and then the Holy Roman Empire changed its mind. Because in some cases Caribs and Arawaks lived near each other, perhaps they began to regard every native as a Carib.

The why is uncertain but the results were clear. Once Europeans began to keep slaves in the New World, it then became ethical to import them from Africa to all of South America, which eventually accounted for 94 percent of the slave trade to the Americas.
News Articles
More Articles All Articles
About