By Tobias Pamminger, University of Sussex

Ants have a reputation of being industrious hard-working animals, sacrificing their own benefit for the good of the colony. They live to serve their queen and take care of all essential tasks including brood care, gathering food and maintaining the nest.

However, not all ant species live up to their reputation. A handful of ant species have figured out a way to outsource all these essential tasks – by exploiting their weaker cousins.

These so-called “dulotic” or slave-making ants specialise in robbing brood from other species. This happens during regular raiding events in which slave-making ants attack neighbouring ant nests, slaughter the adults and carry their unborn young home to their nest.

This new generation of ant workers hatches and, having never known their own kin, accept their new masters and carry out their bidding. For instance, they have to care for the brood of the slave-makers – such as feeding and cleaning – because slave-maker worker ants are specialised “raiding machines” and have have lost the ability to perform such basic tasks themselves. 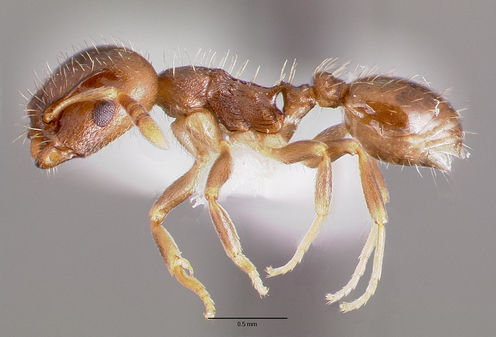 The slave-makers become so specialised that they cant even feed themselves any more and need to be fed by their slaves.

However, not all slaves accept their fate willingly. Some violently tear their masters' offspring to pieces, depositing the remains outside the nest. This type of “rebellion” is widespread among the ant species Temnothorax longispinosus which are enslaved by the North American slave-making ant Protomognathus americanus. These tiny ants (~2-3mm) inhabit the leaf litter layer of mixed forests on the east coast of the USA and the southern parts of Canada, residing in hollow sticks and acorns.

It is tempting to take an anthropocentric perspective on this behaviour and interpret it as the well-deserved revenge of the oppressed servants, getting even with their barbaric masters. However, this interpretation is in all likelihood far from reality. These kidnapped ants do not “know” that they are slaves.

When young ants hatch, they learn the scent of the nest and its inhabitants and accept it as their home. In most cases this system works well, as ants hatch in the nest in which they were reared. However, the majority of ants are able to learn and accept a wide scent spectrum, including the odour of another ant species. This is probably one of the reasons why slavery in ants works – young ants can and will learn the odour of the slave-making nest and accept it as their own.

From an evolutionary perspective, slave rebellion in ants represents an interesting problem, because enslaved ants do not benefit from their behaviour directly. As slave-makers are much bigger and stronger, slaves never attack their suppressors directly, but instead target their masters' helpless offspring. This guerrilla strategy helps to keep the number of slave-makers small – but will never actually achieve an “overthrow” of the slave-making ants.

In order to solve this problem, one has to consider the life history of the enslaved ant species. These ants inhabit a shifting and fragile environment, residing in temporary nest sites – usually acorns – in the forest leaf litter. This environment forces the ants to relocate on a regular basis and sometimes the colony divides if more than one suitable nest site is found. As a consequence, many of these little ant societies inhabit multiple nests in close proximity to each other.

During raids, slave-making ants usually attack only one nest at a time and only carry out a few during any given year. As a consequence, there is a chance that the kin of some enslaved workers will have survived the attack and still live in close proximity to the slave-maker colony that has incarcerated their sisters. By rebelling, slave workers effectively reduce the number of slave-makers in the nest.

As raiding is a labour-intensive business, fewer slave-makers result in fewer raids on surrounding ant nests – which in turns means that their relatives, hiding in an acorn close by, have a better chance to go undetected. So by rebelling, slave workers don’t help themselves but protect their close family.

In a new study, we investigated this hypothesis. We mapped the exact location of hundreds of ant nests, including information on the relatedness of its inhabitants – both to each other and to enslaved ants in the vicinity.

Our results bear this theory out. No one really knows precisely why the slave ants attack their masters' offspring, but the result of these rebellions – whether it is known to the slaves or not – is to increase the life chances of their relatives in nearby nests.