News Staff
Unless you see yourself as a human with a Dogecoin dog atop your neck, avatars are not very realistic. The lack of realism in the digital realms, combined with how tedious VR glasses are, means conferences, meetings and discussions with work colleagues are only slightly more advanced than conference calls of 40 years ago.

You very much know you are on one. But the more realistic the avatars’ appearance and behavior, the more likely it is that people will gain a sense of real social interaction and feel like they are at a conference and not on a conference call. The hurdles are significant. Today’s graphics programs can already create photorealistic, static avatars but animating a smiling face means manually editing almost every single image on the computer to correct nuances such as wrinkles and shadows.

Researchers led by Otmar Hilliges, Professor of Computer Science at ETH Zurich, showed how to do this more easily at the International Conference on Computer Vision. Instead of modeling every last detail, they use intelligent algorithms that learn to automatically render animated avatars in every conceivable pose by observing 3D images of humans in just a few poses. 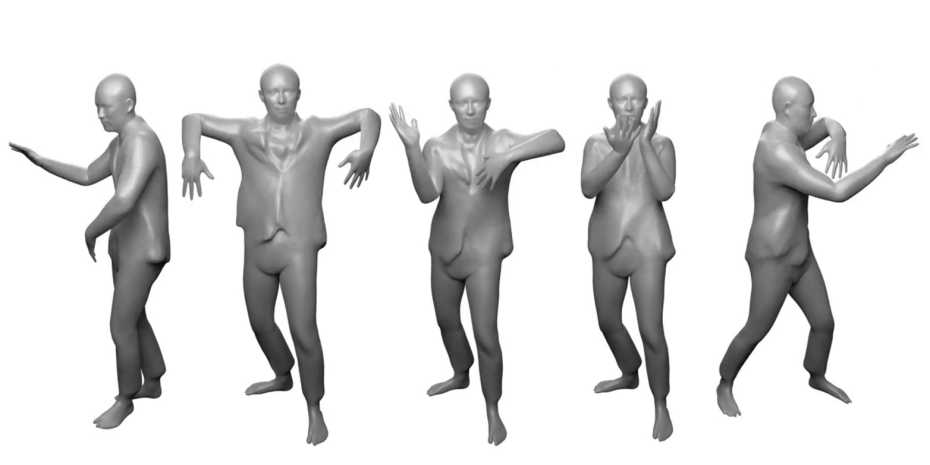 Computer programs that use artificial intelligence to create lifelike virtual humans have existed only for a few years. These programs learn to realistically depict different body positions using 3D scans of a real person, which are recorded beforehand using a complex camera system.

The AI algorithms process the scans by measuring countless points inside and outside the person’s body to define its contours as a mathematical function. In this way, the algorithms build a template shape of the person. To move the avatar to new poses, the algorithms learn to memorize the path from the moving pose back to the template.

However, for extreme poses outside the known repertoire of movements, such algorithms do not have the knowledge and predict wrong paths, leading to clearly visible artifacts: the arms might be detached from the body or the joints located in the wrong place. This is why today’s models are trained on as many different poses as possible – which entails a huge effort for 3D scanning and requires enormous computing power.

To date, AI avatars are hardly applicable, especially for interactive applications. “It’s impractical to capture the entire possible repertoire of movements,” says Xu Chen, a doctoral student and lead author of the study. The new method Chen has developed takes the opposite approach: the model computes the path from the template to the moving poses. Since this means the calculations always have the same starting point, it lets the intelligent algorithms learn better how to generalise movements.

For the first time, it puts such a computer model in a position to easily represent new motion patterns as well. It can even produce acrobatic movements such as a somersault or a back bridge.

he new full-​body avatars can’t yet be personalized; the representations are limited to the person scanned in the original 3D images. Chen and his colleagues would like to further develop their computer model so that it can create new identities at will.
News Articles
More Articles All Articles
About