News Staff
Light that goes into that black hole doesn’t come out, so we shouldn’t be able to see anything behind one, but if a black hole is warping space, bending light and twisting magnetic fields around itself, then according to Einstein's theory of general relativity direct observation of light from behind a black hole should be possible.

Now it has happened.

Material falling into a supermassive black hole powers the brightest continuous sources of light in the universe, and as it does so, forms a corona around the black hole. This light – which is X-ray light – can be analyzed to map and characterize a black hole.

The leading theory for what a corona is starts with gas sliding into the black hole where it superheats to millions of degrees. At that temperature, electrons separate from atoms, creating a magnetized plasma. Caught up in the powerful spin of the black hole, the magnetic field arcs so high above the black hole, and twirls about itself so much, that it eventually breaks altogether – a situation so reminiscent of what happens around our own Sun that it borrowed the name “corona.” 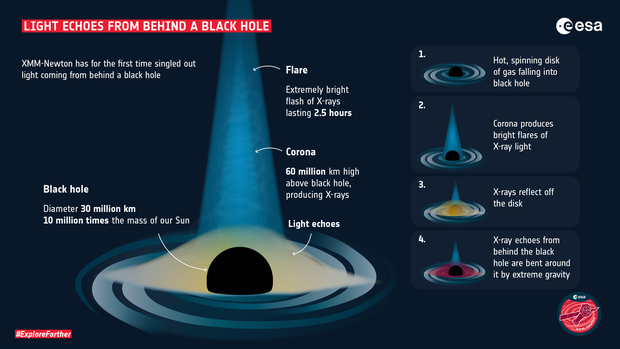 “This magnetic field getting tied up and then snapping close to the black hole heats everything around it and produces these high energy electrons that then go on to produce the X-rays,” said Dr. Dan Wilkins of Stanford. As he took a closer look to investigate the origin of the flares, he saw a series of smaller flashes. These, the researchers determined, are the same X-ray flares but reflected from the back of the disk – a first glimpse at the far side of a black hole. “I’ve been building theoretical predictions of how these echoes appear to us for a few years. I’d already seen them in the theory I’ve been developing, so once I saw them in the telescope observations, I could figure out the connection.”