News Staff
Limenitus archippus, the viceroy butterfly is a mimic, modeling its orange-and-black colors after the queen butterfly, a bug that tastes so disgusting predators have learned not to eat it or anything that looks like it, including viceroys.

The apparent dependence of mimics on their models made biologists wonder if the fates of the two species are forever intertwined. If so, then what happens when the mimic and the model part ways? Thanks to a new study, scientists know. Viceroy butterflies living in northern Florida, far away from the southern-dwelling queen butterflies, are not only more abundant than their southern kin, but they have also developed their own foul flavor.

The classical theory, called Batesian mimicry, posits that one animal, known as the mimic, looks like another animal – the model that predators recognize as "unpalatable." An unpleasant experience trying to munch on the model species convinces predators to avoid both species, since they cannot reliably tell the difference between the two. 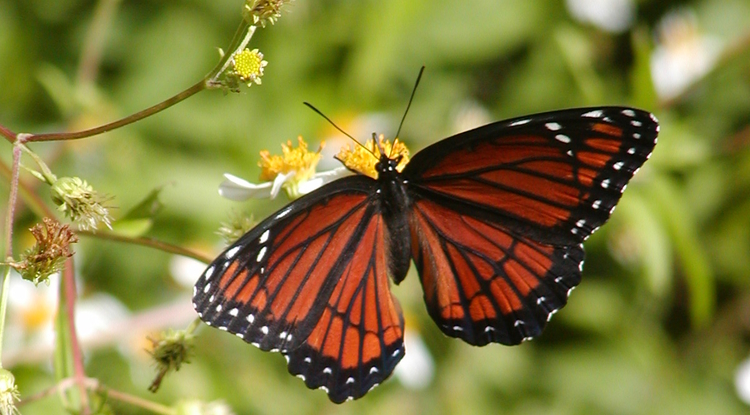 If the butterflies followed Batesian mimicry, populations of viceroys living in regions where predators had never met the unpalatable queens would not recognize the orange color of the butterfly as something awful; it would look like a delicious, easy-to-find snack, and predators would pick off the viceroy.

The study found that the viceroy thrives where the queen is not found, because it has evolved the ability to taste bad. All over Florida, the viceroy caterpillar feeds on the same kind of plant: the Carolina willow. The tree arms itself against pests with phenolic glycosides, chemical relatives of aspirin.

To pests, the aspirin-related toxins may be deadly, but caterpillars have evolved ways to avoid being poisoned by the plants. By possibly storing them in fatty bodies, viceroy caterpillars keep the chemicals out of their metabolic processes, and they live unharmed. When the viceroy lives alongside its model species, it likely discards the toxins when it metamorphoses from caterpillar to butterfly. The study found that when the mimic lives independently from the queen butterfly, it keeps the toxins, making the viceroy unpalatable to predators.

The study first analyzed how much of the aspirin-related chemical could be found in the viceroy butterflies. These results were then compared to the abundance of queens at the capture sites. The second experiment was to test the viceroys’ chemical defenses against predators. The butterflies were fed to praying mantids that had been hand-reared in the lab, and Prudic studied how they reacted to the butterflies. The mantids had a much stronger response to viceroys originating from those places where there were not any queens.

The relationship between viceroy and queen butterflies once fell into the Batesian mimicry category, but when it was discovered that viceroys had the ability to be nasty, the butterflies’ relationship was recategorized as "Mullerian." There are no models in this mimicry theory, only "co-mimics:" two different animals that look the same and are both unpalatable.

The new study proves that the viceroy butterfly does not fit neatly into either mimicry category.