News Staff
Wind tunnel experiments to determine the role of asymmetry caused by the orientation of a volleyball on its aerodynamic characteristics found that it would be easy to make a volleyball more predictable; with a hexagonal or dimpled pattern instead of six panels, each made with three parallel rectangular strips - but that would eliminate some of the fun.

Aerodynamics, the behavior of air as it flows around objects, plays a huge role in volleyball, golf, baseball, tennis, and soccer.

Aerodynamics is why soccer players like David Beckham could "bend" kicks into the goal, and why baseball pitchers throw knuckleballs that can dance around an opposing player's bat. 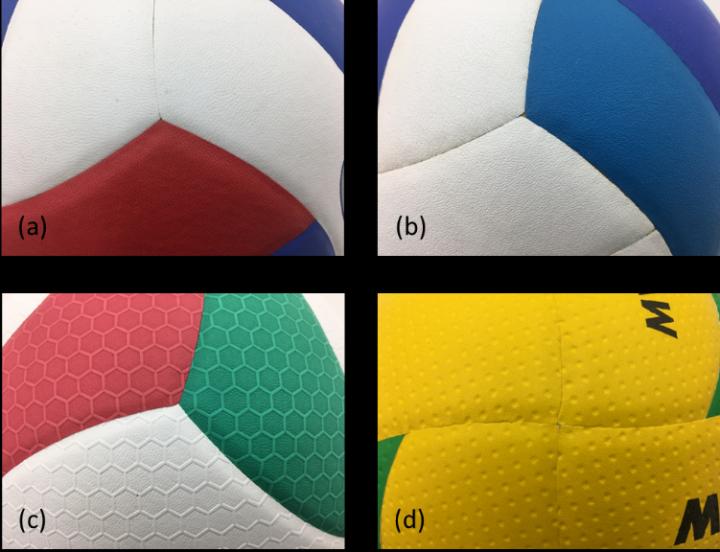 Scientists analyzing aerodynamics in sports focus on boundary layer of air surrounding the ball. For example, dimples on a golf ball can cause it to fly farther on drives because the dimples reduce drag by creating a turbulent boundary layer of air.These effects strongly depend on the speed the ball is travelling, as well as the surface roughness.

"When a spherical ball moves through the air, a long tangle of turbulent, swirling air trails behind, causing it to slow down," explains first author Sungchan Hong from University of Tsukuba. "But if the ball is moving fast enough, this wake suddenly shrinks and the drag force plummets in a phenomenon called drag crisis."

If the laminar flow of the boundary layer near the ball begins to become turbulent, experienced players can take advantage of the resulting strange aerodynamic effects to make the ball swerve unexpectedly. In particular, a volleyball player can get some extra velocity on his or her float serves with an understanding of these principles.

In the wind-tunnel experiments, the researchers found that the panels on standard volleyballs led to unpredictable flight patterns. They also found a hexagonal pattern in the ball significantly reduces the threshold required for drag crisis to occur, while the dimpled pattern ball increases it. Therefore, this study suggests that the conditions for drag crisis can be controlled with the surface design of a volleyball.

"The most commonly used volleyballs have six panels, each made with three parallel rectangular strips. This makes the trajectory strongly dependent on the orientation of the ball. Using a hexagonal or dimpled pattern instead could significantly increase the consistency of its flight," says Takeshi Asai. "This research may have important implications not only within sports, but also for developing more efficient and stable drones."
News Articles
More Articles All Articles
About