News Staff
Some researchers, clinicians, professional organizations, and health charities have been waging a war on sugar, calling for dietary recommendations to be changed and even for a sin tax on sugar, all claiming it will reduce obesity and cardiovascular diseases. In 2014, the World Health Organisation even recommended that adults and children reduce their daily intake of free sugars to less than ten percent of their total energy intake.

Yet there is another contingent who claim the War on Sugar was retaliation by Big Fat for the low fat craze of the 1980s through the 2000s, and once the cycle of health fads circled back around, the war on sugar took hold. Who can make sense of it? It's little surprise the public simply ignores everything in nutrition except what they have already decided to embrace, like a $100 billion organic industry and no public or environmental benefit to show for it.

In Progress in Cardiovascular Diseases, experts on both sides of the sugar issue square off. In a pro-sugar article, Edward Archer, PhD, of EvolvingFX challenged the latest dietary recommendations and presented evidence from multiple domains claiming that “diet” is a trivial factor in metabolic health. “Anti-sugar rhetoric is simply diet-centric disease-mongering engendered by physiologic illiteracy,” he writes. “My position is that dietary sugars are not responsible for obesity or metabolic diseases and that the consumption of simple sugars and sugar-polymers (e.g., starches) up to 75 percent of total daily caloric intake is innocuous in healthy individuals.” 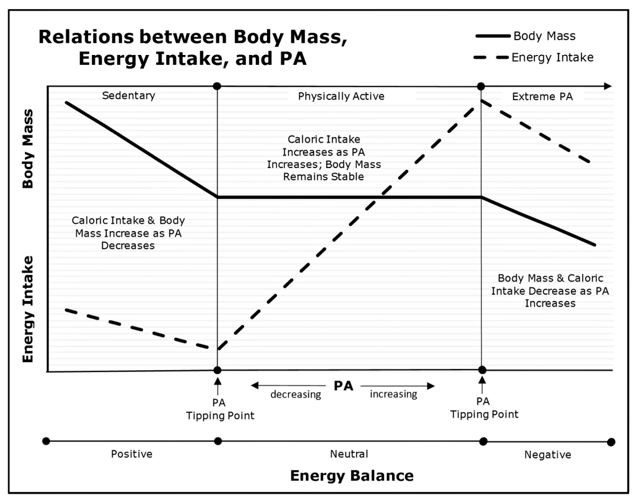 Relations between physical activity (PA), body mass, and energy intake. As PA declines below the metabolic tipping point into the “Sedentary” range, energy intake and energy expenditure become dissociated due to insufficient depletion/repletion cycles, and body mass begins to increase as energy balance becomes positive and insulin sensitivity is lost.

He has a point. Biological life depends on sugar in its many forms, and sugars and sugar-polymers have played critical roles in both human evolution and dietary history and were the major sources of nutrient-energy (calories) for most of the global population throughout human history. There is a reason ancient people genetically engineering fruits to have more sugar.

“Diet-centric” researchers often ignore the fact that physical activity, not diet, is the major modifiable determinant of metabolic health. If sugars are 80 percent of total energy intake and you exercise, it is irrelevant. Calories matter. If you burn them off, you will be healthy.

Archer also rightly notes that anti-sugar zealots such as Greg Glassman, CEO of Crossfit, are wrong in their claims that obesity and type 2 diabetes mellitus are diet-related diseases when scientists know those are metabolic conditions caused by the positive energy balance (i.e., over-nutrition) driven by physical inactivity in past and current generations.

It's a debate so others disagree. Ancient people genetically engineering fruits to have more sugar were not creating refined sucrose and James J. DiNicolantonio, PharmD, and James H. O’Keefe, MD, of the Department of Preventive Cardiology, Saint Luke's Mid America Heart Institute in Kansas City argue that dietary sugar (either glucose, sucrose, or high-fructose corn syrup) is not necessary for life, and that humans did not consume refined sucrose or high fructose corn syrup throughout most of their evolution. “The truth is you really can't outrun a bad diet, especially when it comes to overconsuming refined sugar. While it's true that exercise may reduce the risk of obesity from overconsuming refined sugar, it doesn't prevent dental cavities, inflammation of the gums, or inflammation that occurs in the intestine, liver, and kidneys when the body processes large amounts of sugar. Healthy populations that consume fairly high amounts of raw honey who also live hunter-gatherer lifestyles should not be used as an example to give an industrialized sedentary population an excuse to overconsume refined sugar. Importantly, raw honey is not the same as refined sugar.”

Except it is. One common high fructose corn syrup form is identical in its percentage of fructose as raw honey - 55 percent.
News Articles
More Articles All Articles
About