Scientists continue to gain ground in the race against wheat stem rust, a pathogen that threatens global food security because of its ability to kill wheat. The new chink in nature's armor was discovered in the first rust virulence molecule that wheat plants detect to 'switch on' built-in resistance and stave off the disease.

Stem rust, historically the most dangerous pathogen of wheat is caused by the fungus Puccinia graminis f. sp. tritici (Pgt). A particularly destructive form of Pgt, Ug99 spread across Africa and the Middle East. Such geographic expansion and the emergence of other virulent strains related and non-related to Ug99 have caused great concerns for wheat production. Even more alarming is the recent detection of new virulent strains in Europe which could easily make their way to the US. A 2017 paper published in Science revealed how the immune system in plants resistant to this disease directly recognizes a specific fungal protein to subsequently "turn on" resistance and fend off the pathogen. 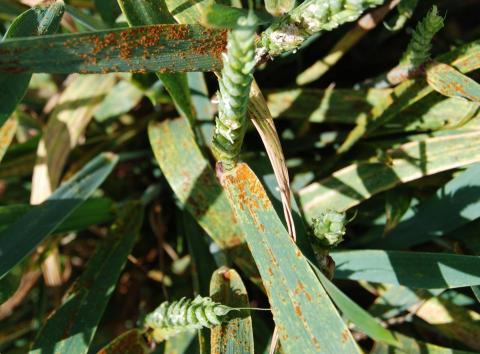 "For the first time, it will be possible to do DNA testing to identify whether a rust in a wheat crop anywhere in the world can overcome a rust-resistance gene, called Sr50, which is being introduced in high-yielding wheat varieties," said University of Sydney Professor of Sustainable Agriculture Robert Park, co-leader of the research team. "This will indicate whether or not a given wheat crop needs to be sprayed with expensive fungicide quickly to protect against rust, which would otherwise devastate the crop in a matter of weeks."

This is a key finding to stay ahead of rust disease epidemics, like those that have been extremely damaging in East Africa and making a comeback in Europe. Using a Biosafety Level - 3 containment facility, the team was also able to work with the African strain Ug99 under maximum restricted conditions to prevent pathogen escapes. They were able to examine the genetic variability of AvrSr50 in a set of Pgt isolates with global importance.

As food production improves, and with it wealth in developing nations no longer forced to spend nearly half of their earnings on basic necessities, all aspects of culture will improve also. But first we must satisfy demand for wheat in the developing world, which is expected to jump 60 percent by 2050. By identifying how stem rust strains are able to overcome Sr50 resistance, by mutation of a gene called AvrSr50, resistance genes for deployment can be prioritized.