News Staff
Researchers doing observations in Myanmar's Htamanthi Wildlife Sanctuary found that rain-filled tracks of Asian elephants (Elephas maximus) were filled with frog egg masses and tadpoles. The tracks can persist for a year or more and provide temporary habitat during the dry season. Trackways could also function as "stepping stones" that connect frog populations.

Though ecologists regard humans modifying the landscape as a bad thing, when elephants trample the environment they are termed "ecosystem engineers" credited with seed dispersal and converting large amounts of plants into dung that is deemed an important nutrient input for terrestrial and aquatic systems. Even damage to trees is rationalized as creating refuges for small vertebrates (lizards and small mammals), while dung piles provide food for a diversity of beetles.

Perhaps now that can change. 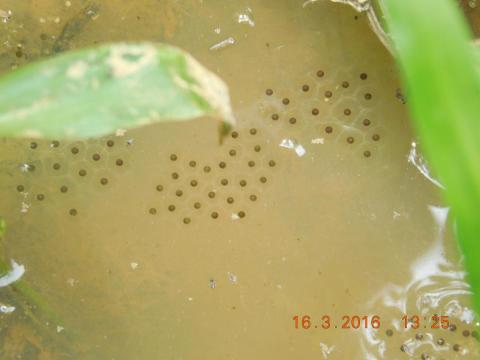 You didn't trample the environment, you created a frog habitat. Image: Steven Platt/WCS

Said Steven Platt, Associate Conservation Herpetologist with WCS's Myanmar Program and lead author of the study: "Elephant tracks are virtual condominiums for frogs. This study underscores the critical role wildlife play in ecosystems in sometimes unexpected ways. When you lose one species, you may be unknowingly affecting others, which is why protecting intact ecosystems with full assemblages of wildlife is so important."
News Articles
More Articles All Articles
About