News Staff
Egyptian coffins and mummy cases have been found covered in a mysterious 'black goo'. What is this goo made from and what can it reveal about Egyptian funerary practice? The British Museum's Kate Fulcher has detailed answers but you can read a summary below.

Djedkhonsiu-ef-ankh died almost 3,000 years ago in ancient Egypt. He was a priest in the temple of Amun at Karnak, where he was an ‘Opener of the Doors of Heaven’ - permitted to open the temple sanctuary which contained the image of their deity.

An elite, Djedkhonsiu-ef-ankh was mummified and sewn into his plaster and linen mummy case, which was painted in bright colors, with gold leaf over the face.  That's the popular depiction of mummies but one addition seems odd - the case was covered in thick black 'goo' which cemented the mummy case into the coffin.

Some burials had this black goo and some did not. Why did any have it at all? 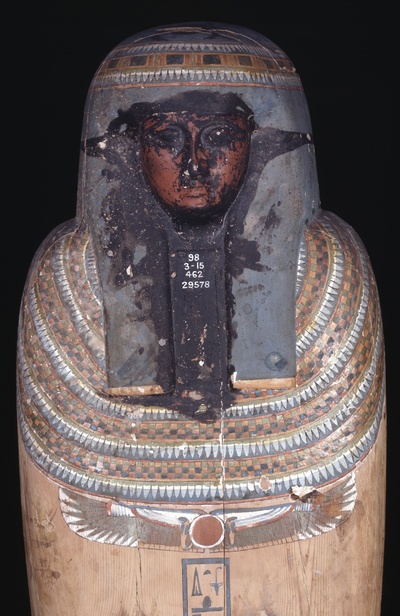 British Museum experts analyzed samples from 12 coffins and mummy cases, all dating to 900–750 BC using Gas Chromatography – Mass Spectrometry. Once the molecules were separated, the mass spectrometer separated them according to their mass to charge ratio and found that the goos were a combination of solid crude oil, plant oil, animal fat, tree resin, and beeswax. Anything else they contained had long since dissipated.

Pistacia tree resin and conifer tree resin are not native to Egypt so those were likely imported from some place like Israel. Bitumen is solid crude oil and likely everywhere.

But biomarkers show that bitumen from the Dead Sea. There are documented instances of people people rowing out to where they would be floating and chopping them up to sell them in Egypt.

Osiris, the god of death and rebirth, was called ‘the black one’ and is depicted with black skin and a mummified body. Kate Fulcher, Research Assistant at The British Museum, also notes that black is the color associated with the alluvial silt deposited on the banks of the River Nile after the annual flood receded. It's how they grew their crops so the death and rebirth metaphor is apt. It could therefore be reasoned that the practice of coating coffins in black goo links the coffins to regeneration associated with Osiris.