When What Goes Up Feels Down Is Not Postmodernism, It's Seeing Gravity Rather Than Feeling It
By News Staff | January 25th 2020 07:51 AM | Print | E-mail

News Staff
People can deny a lot of science without making a huge difference in their lives; no one will die if they deny evolution. Gravity, on the other hand, will kill you. You can't just jump off a building and deny it exists and expect a positive outcome.

This unseen force dominates our entire lives so completely we forget it exists. We drop pencils and struggle to walk uphill and go on with our lives.

How people account for this invisible influence while moving through the world was the subject of a recent experiment, and the results showed we regard it a lot differently when we can see it instead of feeling it through changes in weight and balance. 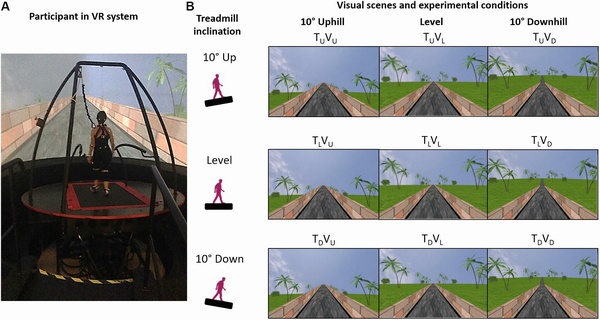 Apparatus and experimental conditions. (A) A fully immersive virtual reality (VR) system containing an embedded treadmill synchronized with visual scenes projecting a moving road on a large 360° dome-shaped screen in a room-sized VR facility. (B) During level walking, participants experienced nine different conditions presented in random order, in which the inclination of the treadmill (T) and/or visual scenes (V) transitioned to 10° uphill (U), remained level at 0° (L) or transitioned to -10° downhill (D). Conditions are illustrated as a 3 × 3 matrix, in which rows represent the inclination of the treadmill (T) and columns represent the inclination of the visual scene (V). Congruent condition TLVL represents continued level walking, and TUVU and TDVD represent congruent uphill and downhill walking, respectively. The other conditions are incongruent: only vision up (TLVU) or down (TLVD), only treadmill up (TUVL) or down (TDVL), treadmill down-vision up (TDVU), and treadmill up-vision down (TUVD).

In order to determine the influence of vision and gravity on how we move, the researchers recruited a group of 16 young, healthy adults for a virtual reality (VR) experiment. The researchers designed a VR environment that simulated level, uphill, and downhill walking. Participants were immersed in a large-scale virtual reality system in which they walked on a real-life treadmill that was at an upward incline, at a downward decline, or remained flat. Throughout the experiment, the VR visual environment either matched or didn't match the physical cues that the participants experienced on the treadmill.

Using this setup, the researchers were able to disrupt the visual and physical cues we all experience when anticipating going uphill or downhill. So, when participants saw a downhill environment in the VR visual scenery, they positioned their bodies to begin "braking" to go downhill despite the treadmill actually remaining flat or at an upward incline. They also found the reverse - people prepared for more "exertion" to go uphill in the VR environment even though the treadmill remained flat or was pointing downhill.

The researchers showed that purely visual cues caused people to adjust their movements to compensate for predicted gravity-based changes (i.e., braking in anticipation of a downhill gravity boost and exertion in anticipation of uphill gravitational resistance). However, while participants initially relied on their vision, they quickly adapted to the real-life treadmill conditions using something called a "sensory reweighting mechanism" that reprioritized body-based cues over visual ones. In this way the participants were able to overcome the sensory mismatch and keep walking.

"Our findings highlight multisensory interactions: the human brain usually gets information about forces from "touch" senses; however, it generates behavior in response to gravity by "seeing" it first, without initially "feeling" it," says Dr. Meir Plotnik of the Sheba Medical Center, Israel.
News Articles
More Articles All Articles
About