Bente Lilja Bye
What a spectacular coincidence! A meteor hitting Earth on the day the asteroid 2012 DA14 is passing close by!

When I was contemplating what kind of natural disasters I should throw in the scenarios for my Planet Earth: Extreme Beauty - Extreme Danger I was considering a big asteroid NOT missing the target for once. I chose a major blast from the Sun instead as that is something that happens more frequently anyhow, at least at certain points in time of the Sun spot cycle. 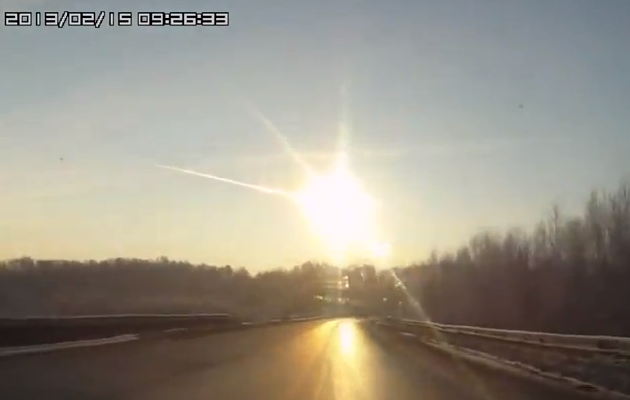 The meteor as seen by one of the car cameras that seems so popular in Russia. From the video below.

Today, we've all hear about the meteorite hitting Russia, exploding into several smaller but still somewhat damaging pieces. It is an amazing view and luckily nobody seems to have been killed but hundreds were injured. Both Phil Plait at Bad Astronomer and Universe Today showcase several videos that of course were recorded (I never stop being amazed by how quickly video recordings surface in media, just amazing). Reportedly, some mobile phones ceased to work, ref the above mentioned scenarios. What most likely was the shock-wave created by the meteor raging through our atmosphere, made a huge blast blowing objects into pieces (windows, garage doors and other parts of buildings).

Here you go, check it out for yourself: Check out the blast in the beginning of this video:

Wonderful light in this one (starts at around 15s):

The BBC has a good article about the meteor incident here.

A quick reminder of the differences between asteroid, meteor and meteorite:

Asteroids: Small bodies orbiting the Sun along with the planets
Meteors: An asteroid entering Earth's atmosphere
Meteorites: Fragments of meteors that hits the surface of the planet.