A gravity model of the Earth constructed with data from GRACE. Credit: University of Texas Center for Space Research and NASA


It is all about gravity these days. First came GRACE (Gravity Recovery and Climate Experiment) and then we'll have GOCE (Gravity field and steady-state Ocean Circulation Explorer). I'll reveal the difference right away: GRACE measures time variations while GOCE measures the static gravity field. Both are equally important for a number of societal application and both are hot on the satellite scene this fall. Well, actually amazing science results have come out based on data from GRACE ever since it was launched in 2002. In particular the increased resolution is stunning and continue to enthuse the scientists. One of my colleagues, Srinivas Bettanpur at the University of Texas, has increased the spatial resolution beyond our wildest dreams and provides now researchers with an instrument that can estimate mass changes with a spatial resolution of less than 322 km (200 miles) – a lot better than first anticipated.

Most recently (today), the first results from the unprecedented high accuracy measurements of Greenland ice variations was announced. Lets back up a little and introduce GRACE in somewhat more details first. The German-American GRACE consist in fact of two satellites and these twin satellites are used to make precise measurements of gravity-field changes on Earth. As gravity is directly related to mass, these data can be used to plot changes in the earth's water balance, such as the disappearance of the ice caps. Major breakthroughs from GRACE include establishing the rapid loss of ice mass in recent years from Greenland and Antarctica, and major changes in water storage in China's Yangtze River and other water sources. 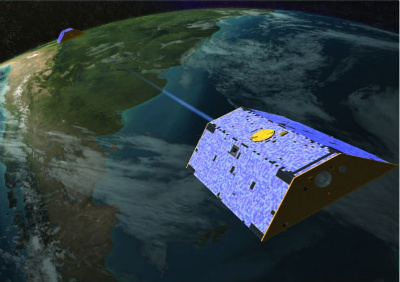 German-American GRACE (Gravity Recovery and Climate Experiment) satellites, two satellites that have been orbiting the earth behind each other since mid-2002. Credit: GRACE


GOCE will map the reference shape of our planet – the geoid - with unprecedented resolution and accuracy. The spatial resolution for instance, will be 100 km (for comparison note that the much improved spatial resolution of Grace is 322 km). The satellite realizes a broad range of fascinating new possibilities for the fields of oceanography, solid Earth physics, geodesy and sea-level research, and significantly contribute to furthering our understanding of climate change. A more detailed description of the usefulness of a good geoid can be found in 10 reasons why Al Gore needs the geoid”. 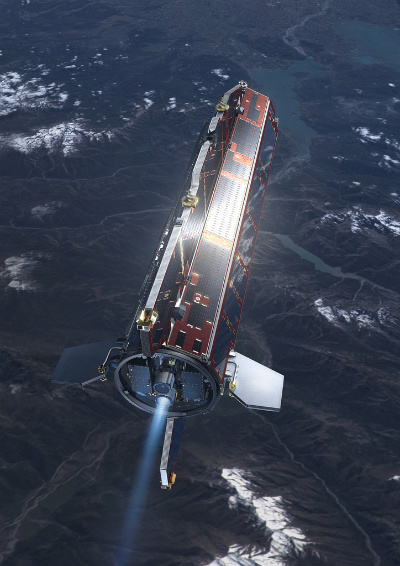 The sleek aerodynamic design of GOCE (Gravity Field and Steady-State Ocean Circulation Explorer) immediately sets it apart from most other satellites. This unique five-metre long spacecraft has none of the usual moving parts. The satellite together with its sensor, system of supporting instrumentation and control elements actually form a single composite gravity-measuring device. Credits: ESA - AOES Medialab

Within the last 10 years an improved knowledge of the geoid has revolutionized height determination on land by GNSS satellites, allowing heights to be determined with an accuracy of better than 2 cm in several countries. For marine areas a similar improvement is expected to take place giving oceanographers access to valuable information on ocean circulation from satellite altimetry.

GRACE and GOCE will to some extent complement each other and GOCE may even improve the performance of GRACE. As for all remote sensing techniques, a ground segment to assist and calibrate the data is imperative.

Unfortunately GOCE has been delayed. The original launching date this fall was on the same day they fired up the Large Hadron Collider, 10th September, but the event has been postponed and it is now set to 5th October 2008. 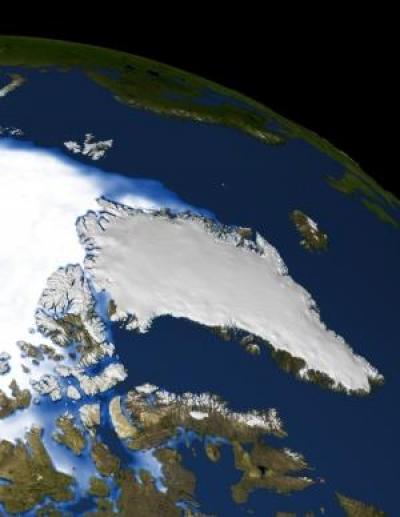 Greenland lost an average of 195 cubic kilometres of ice per year between 2003 and 2008, which is enough to cause an annual increase in the global sea level of half a millimetre, or 5 cm over the course of the next century. Credit: GRACE

Back to the news of the day. Based on GRACE data researchers can now present a more detailed map of mass loss – the ice melting - in Greenland. Researchers from TU Delft joined forces with the Center for Space Research (CSR) in Austin, Texas, USA, to develop a method for creating an accurate picture of Greenland's shrinking ice cap. On the strength of this method, it is now estimated that Greenland is accountable for a half millimeter-rise in the global sea level per year.

They point out, however, that long-term observations are needed to compile a reliable estimate of Greenland's contribution to the rising sea level during the next century. Due to the high spatial resolution it is possible to plot the loss of mass per region, thereby providing new insight into the patterns of ice loss. These findings will be published in the scientific journal Geophysical Research Letters in early October.

GRACE at University of Texas at Austin