Bente Lilja Bye
At the Top of the World.
The massive 9.0 M earthquake at Tohoku, Japan, 11. March 2011 literally shook the entire planet. The signals were read even at the top of the world, close to the north pole. Read on to learn about earthquake and tsunami observations in general before you take a look at the unique earthquake recordings from the high-north. 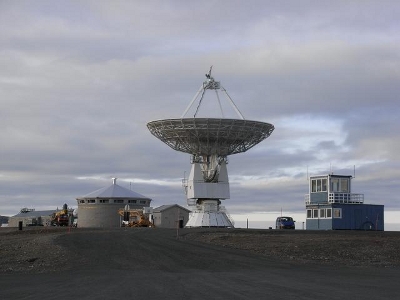 After the 2004 Indian Ocean tsunami the international community stepped up its efforts on developing and building early warning systems. Japan is a leading nation with respect to expertise and implementation of both earthquake and tsunami early warning systems. The Tohoku earthquake and the subsequent tsunami that rushed towards and devastated the shores of Honshu island in Japan would have been a substantially larger disaster than it already is, were it not for the well functioning warning systems on the Japanese islands. 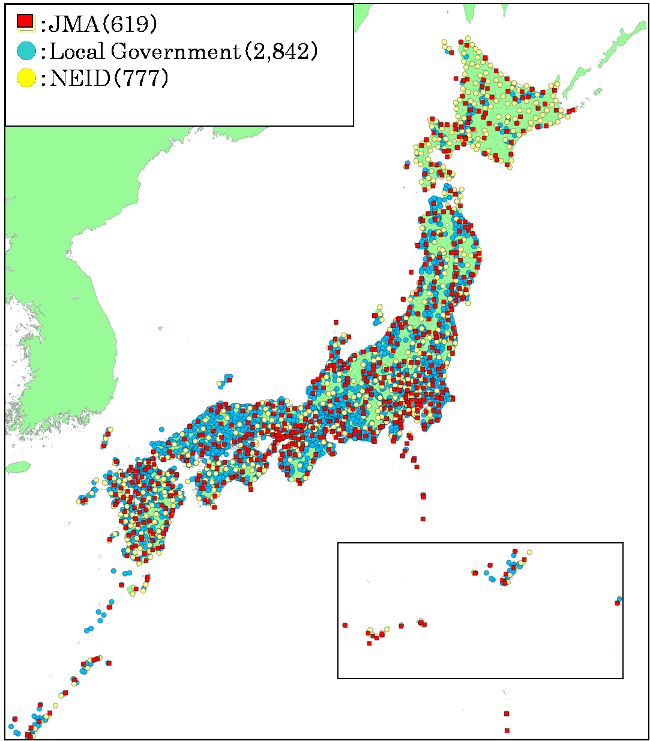 In Japan there are a number of dense monitoring networks, like the national seismic networks that we see on this map. Credit: Japan Meteorological Agency.


In Haiti Earthquake, science, early warning and mitigation a general description of warning systems is presented. An early warning system consist of 4 elements: Risk Knowledge; Warning Service; Dissemination and Response Capability. In order to be considered well-functioning all 4 elements of a warning system have to work and the Japanese early warning system worked very well.. We've seen a flood of heartbreaking images describing the consequences of the tsunami in particular. But what did and do scientists see through their instruments? We'll take a closer look at the Warning Service element that includes monitoring and forecasting impending events. 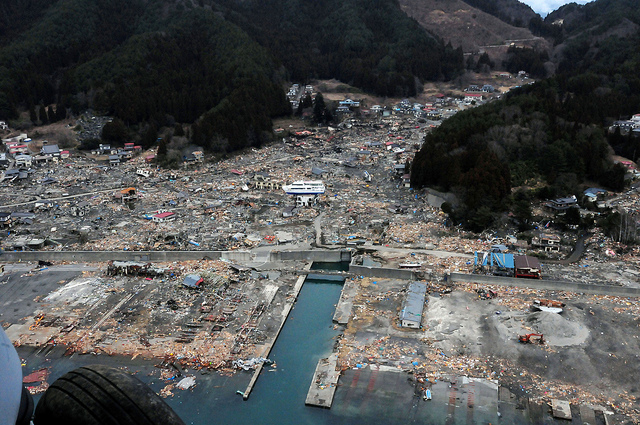 The Tokohu-oki earthquake 11th March 2011 caused a massive tsunami that devastated the shores of Japan's Honshu island. IT will take years to rebuild this region. Credit: US Navy. 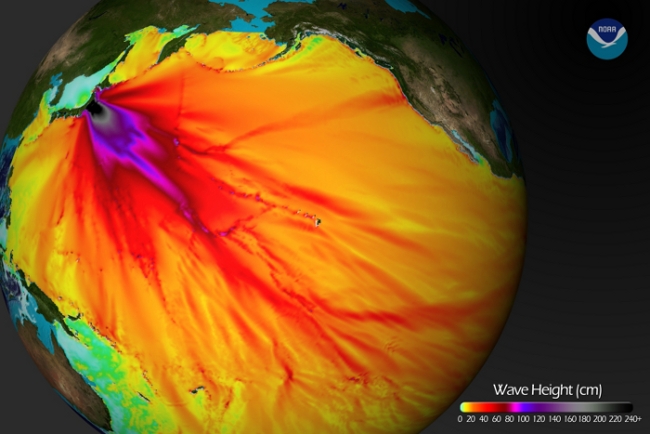 Tsunami waves are modeled and included in tsunami early warning systems. Once the earthquake magnitude and location are known warnings of wave size and arrival times can be issued. Here we see the wave distribution of the Tohoku-oki tsunami. Credit: NOAA

Our planet is a restless planet, sometimes more restless than others. The Earth rotates around it's own axis daily and circumvent the Sun once a year, that is pretty obvious to most of us. But less obvious are the more subtle movements like the tidal effects and continental drifts. Except of course, when sudden movements like earthquakes happens. Then it is not necessarily so subtle anymore. The science that describes the Earth's movements, shape, rotation and gravity field is called geodesy and a whole range of geodetic observing systems are included on the list of instruments reading the earthquake and tsunami signals. In addition we have the seismic signals that perhaps is more well-known in connection with earthquakes. The signal is basically sound-waves that travels around the globe almost instantly after an event. 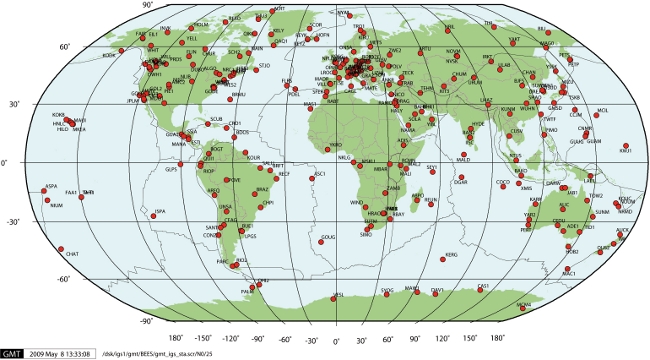 The international GNSS (Global Navigation Satellite System) stations, which consist of GPS stations from countries all over the world, form the basis for monitoring crustal movements.

It is equally important to monitor our planet before, during and also after events. Otherwise we will not be able to interpret the signals correctly and make the right decisions. 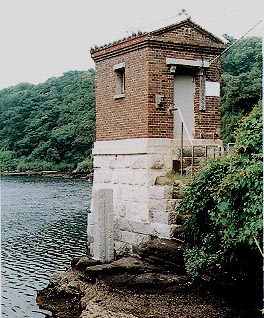 In the case of an event (earthquake) the seismic signals are immediately recorded and used to make the first estimates of where (location) the earthquake takes place and it's size (magnitude). However, in cases where the earthquakes are so big as the Tokohu earthquake (9.0), the seismic techniques are not quick enough to produce correct estimates of the magnitudes which in turn provides the basis for tsunami warnings with times of arrival, sea level and inundation maps. Recent development of geodetic techniques shorten the time for magnitude estimates. (Will be described in a later article.) Geodetic techniques are also an integral element of the oceanographic network. Tide gauges, ocean buoys and submarine pressure gauges are all part of the oceanographic observing system that are included in a tsunami early warning system. Often the     oceanographic instruments are co-located with geodetic            Old Japanese tide gauge.                   instruments like GPS and various instruments measuring gravity.


Gravity measurements of the Tohoku earthquake close to the North Pole
While there are dedicated instrumental networks for tsunami early warnings, signals from other networks are also contributing to both the before and after analysis that goes into the warning systems.

The abrupt movement of the tectonic plates create sound waves that the global seismic network sees. As the movement implies a displacement of huge masses, it results also in a change in the gravity field. Geodetic experts keep track of our planet's gravity field with the help a suite of instruments like GRACE and GOCE from space and various gravimeters on land, airborne and on ocean (both airborne and oceanographic gravity measurements are taken on a campaign-basis. )

The Norwegian Mapping Authority's geodetic observatory at Ny-Ålesund, Svalbard, which, by the way, is the world's northern most society at 79,9 degrees north, operates several different types of geodetic instruments, such as GPS, VLBI and a Superconducting Gravimeter.The fine tuned superconducting gravimeter instrument was originally commissioned and operated by the National Astronomical Observatory of Japan, in close cooperation with Norwegian authorities who took over the operations in it's entirety in 2010. It has made continuous observations (every 1 second!) of the Earth's gravity since September 1999. 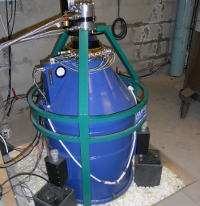 We say that the superconducting gravimeters are so sensitive to changes in gravity that if you choose to take a leak close by, the instrument will reveal your actions (your fluid adds weight to the local environment). Weather this is true or not has no bearing on the observations of the Tohoku earthquake. The signals were so powerful it knocked out the instrument after about 20 min (see graph below). After a short brake it was fully operational and was recording again. The gravitational signal of the earthquake reached Ny-Ålesund and the superconducting gravimeter approximately 10 min the event in japan. 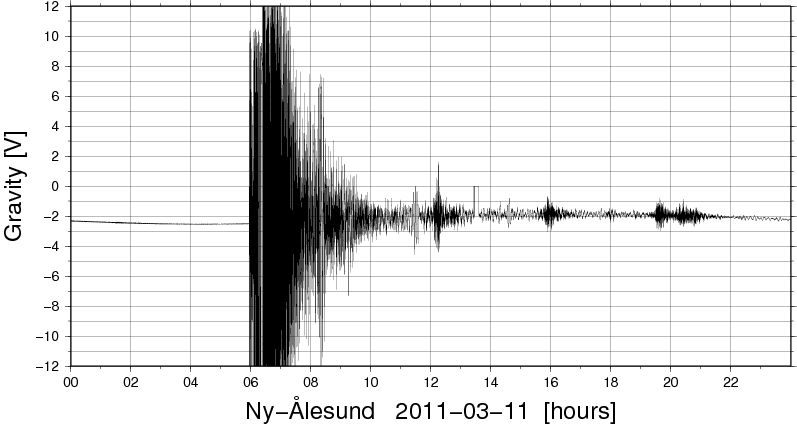 The thin line before the horizontal black wall, are real measurements of gravity, and no error or irrelevant markings as one might be tempted to think. The signal extends way beyond the normal data range. Credit: Ove Christian Dahl Omang. 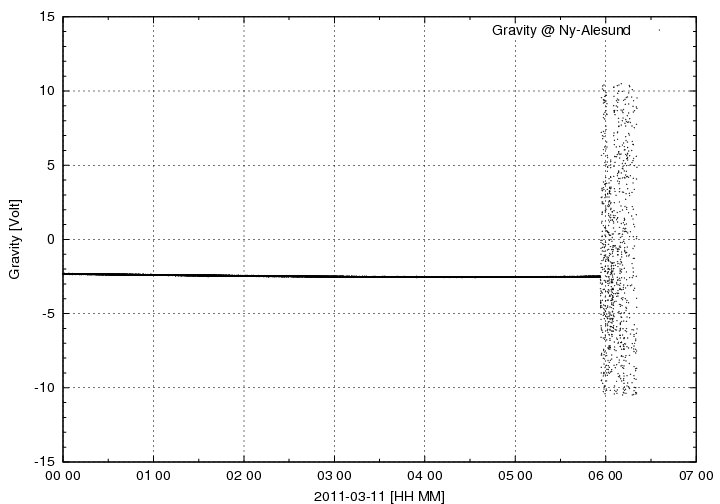 Here we see the signal with greater resolution. It shows a rather immediate and dramatic change in amplitude. Also we can see how the data acquisition unit stopped recording. Note that the signal is measured in volts rather than gal, the unit for gravity, due to the superconducting/electric instrumentation.
Credit: Ove Christian Dahl Omang.

These recordings will surely be integrated in the numerous analysis of this massive earthquake.

The tsunami as it looked at the ocean buoy outside Japan. GPS measurements.

Some of the international observations systems that are being used:

You can also see for yourself how the warning system worked in practice in Japan. Maybe even more interesting now that you know a few things about what goes into such a warning system.

Richard M Allen, UC Berkely, collection of info about the warning in Japan.