Does money make you happy?  Economists think so - the concept of 'utility' assumes that economic activity represents people consuming in ways that best supports their happiness.  And yet, high sales of Backstreet Boys CDs prove that this cannot be true.  What's going on here?

Happiness is a difficult thing to study scientifically

I have had many conversations with people, who, after I tell them I study positive psychology, question whether happiness can be measured.  It's intangible, they say.  Sometimes this is the same type of person who just took a personality test to find out what kind of fruit they are.  But they have a point - it's hard to study topics that are well established in common vernacular, because everyone has a slightly different idea of what it 'is'.

This probably deserves a blog of it's own, but for now, it's probably better to use the term 'life satisfaction', or 'subjective well-being', which is a cognitive appraisal of your own life.  "All things considered, how happy are you with your life right now, on a scale of 1 to 7?"  That's an example of what a scale item might be.  So just so you know, that's what I mean when I say 'happiness'.

When you look inside a nation, you tend to find that there is a positive correlation between happiness and wealth.  It's usually between .1 and .2 - so pretty weak, and the large sample sizes are probably contributing to that being a statistically significant result (Diener and Oishi, 2000).  You tend to get stronger correlations when you zoom in a little further, and specifically look at poorer areas.

General rule - being the richest person in a poor area, you're likely to be a little happier than the rest.

What happens if you plot the happiness and income of loads of countries on a scatter graph?  You get something roughly like this (I just drew this BTW): 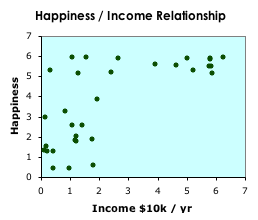 Apparently, after a country gets to about $10k per capita, the correlation weakens, and wealth brings diminishing returns after that.  But why?

One possibility is the infamous hedonic treadmill.  This theory has had some revision lately (Diener et al, 2006), but the model basically proposes that as your standard of living rises, so do your expectations!  Therefore you need to continually increase your wealth to even remain at the same level of happiness.  One study found a similar situation with lottery winners - they are ecstatic when they first win, but after a while, they get used to the trappings of wealth and happiness returns to a similar level as before they won (Brickman, Coates and Janoff-Bulman, 1978).

This apparent paradox is reflected in longitudinal data in many countries - over time, countries have tended to increase their wealth, but during the same periods, happiness has not increased.  Graphs of the 'Easterlin Paradox' tend to look like this (again, drew it myself to illustrate!): 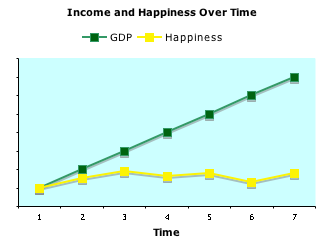 But as I'm sure you'll have noticed over the last couple of years, when a nation's income drops suddenly, we do react to that.  This is classic Prospect Theory (e.g., Tversky&Kahnemann, 1991) - we are more sensitive to losses than we are to gains.

It's not the size, it's what you do with it that counts

As I mentioned earlier when talking about GDP, there are numerous ways you can use your wealth.  On one hand, wealth might have a direct impact on happiness - knowing you are wealthy/high status, not worrying about bills/having security, on the other hand, there might be indirect effects related to how you got it and what you do with it.  If you work 80 hours a week and don't have time to enjoy the wealth, is knowing you have it enough?  On the other hand, if you don't have a lot, but you use it in the right way, would that actually be a better strategy, in terms of happiness?

The latter looks to be true (although that wont stop either person wanting more money!).  People who spend money on other people end up happier than those who spend it on themselves - and this was found in cross-sectional, longitudinal, and experimental studies (Dunn, Aknin and Norton, 2008).  Another study found that spending money on 'experiences' results in greater happiness than spending it on possessions (Van Boven&Gilovich, 2003).  This is probably because spending money on other people builds bonds and relationships, and experiences create 'memory-capital', which you can always reminisce over, think about etc., while a possession will be obsolete in a year or so - after which it will probably be a source of UNhappiness!

Does money make you happy?

Yes and no.  It doesn't seem to be a simple case of "get rich, get happy" (but if you're not rich, that probably won't be any consolation!).

If you are poor and get money, there's a good chance you'll get happier; there seems to be a small overall correlation.  But the relationship is not direct or simple - we adapt to circumstances, and how we spend the money also plays a role.

Maybe when you're considering buying that big screen TV, try some kind of experiential purchase instead?  Or spend the money on another person (me, for instance).  And for God's sake, don't buy a Backstreet Boys CDs!