Tommaso Dorigo
ATLAS has just released a note which summarizes the searches for the standard model Higgs boson in 7-TeV and 8-TeV data. Since July 4th the main improvement is the addition of the WW channel, which had not been shown back then. With it, the combined local significance of the 126 GeV Higgs boson excess in the WW, ZZ, and γγ channels grows to 5.9 standard deviations. In the words of a Facebook friend who's in ATLAS: "if this is not a discovery, I don't know what is".

So, due congratulations to my ATLAS colleagues for this new important document. The paper is indeed full of detail about the searches, answering many of the questions that the format of the July 4th event did not allow to be asked. 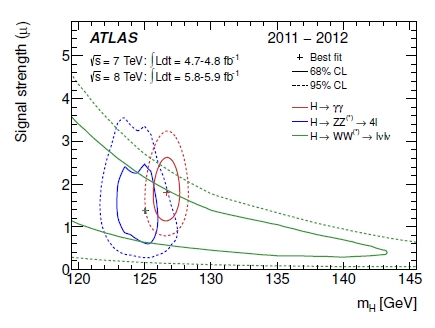 The most important measurements, those of mass and cross sections, are summarized in the figure on the right, which shows the 1-sigma contours for the different final states: the WW measurement is the one which extends the most in the horizontal axis, because of the large indetermination in the mass due to the escaping neutrino pair.

The three measurements are consistent with each other, and the global signal strength is measured at 1.4+-0.3 times the standard model predictions for a 126 GeV Higgs boson. 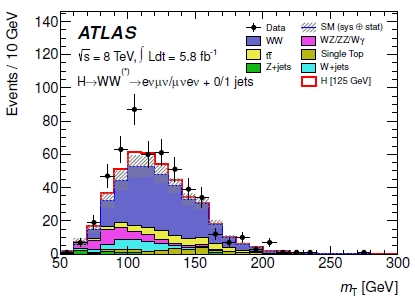 On the left you can see the reconstructed WW transverse mass for Higgs candidates found by ATLAS, with the data (black points) compared to sum of backgrounds and predicted Higgs signal (in red). As you can see, the data has a strong excess, which contributes sizably to the global combined significance.

Finally, a very interesting plot similar to the one that CMS had produced on July 4th is the one shown below, which shows the signal strength modifier for the diphoton channel, calculated with respect to the different Higgs production modes: gluon-fusion and top pair higgsstrahlung on the horizontal axis, and vector boson fusion plus vector boson higgsstrahlung on the vertical axis.

The production modes may be differently affected by non-standard-model physics, so this is a very nice check of consistency that Higgs production occurs (roughly) as we expect. It is shown below. 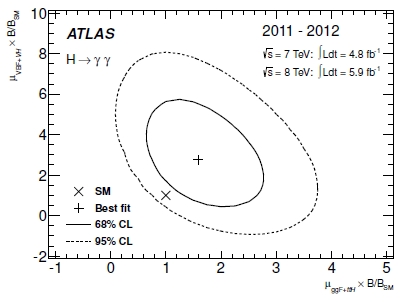