Tommaso Dorigo
There is nothing like computer-assisted post-mortem analysis of your chess games to get you back to reality about the potential of your brain: the computer sees so much more than you do, and so much quicker, that you can't help throwing your hands up sometimes.

It is the case of the game I played yesterday during a team chess match in Cavarzere. My team won the match 3-1, but I only drew my own game. Upon getting back home and checking an opening book, I was satisfied to see that I had found all the right moves in a opening variation unknown to me. But then I looked a bit further using a chess program, and was astounded by the tactical variation it immediately spotted (well, after six seconds to be precise). The position arises after the first few moves of a 4-pawns attack in the Alechin defence:

The position after the 16th black move is shown below. If you are going to try and find the correct continuation, do not scroll down... 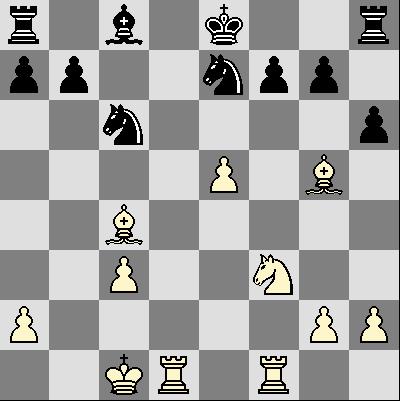 Here I did have the feeling I had to exploit the development advantage, but failed to see how I could put to work the two motives I had myself created on the board - namely, the weakness of f7 and the weakness of black's eight rank. So I just played 17.Be3, planning to re-route the bishop to c5. I obtained a slight edge but later, as the three other games of the team match ended 2.5/0.5 in our favor, I was led to agree to a draw without trying to squeeze a win. Instead, there was a move that would bring an immediate decisive advantage to white. Can you see it ?

Less obvious, however, is the right path on 17...Nxe5, which defends f7 and attacks the Bc4. But there again, the weakness of black's dark squares tells: 18.Nb5! (threatening Nc7 and mate with Rd8). Here black has a choice: hxg5, Nxc4, Nbc6, Bg4; unfortunately, all lose. Let's see how:

Did you see 17.Nd4 before looking at my text above ? Of course even if you did you had a simpler task than the one I faced during the game, when nobody was telling me to look very carefully to the position after 16....h6. But I think it is still not an easy move to see, in particular in conjunction with the complex variations that may arise after 17....Nxe5. Once one saw the idea of Nd4-b5, however, one would sit on the position until everything was clear...
A Quantum Diaries Survivor
More Articles All Articles
About