Tommaso Dorigo
Playing chess games flawlessly is a super-human endeavour, which even machines are still having a hard time achieving. However, the occasional flawless game does arise in human practice, albeit rarely. Usually it is a grandmaster who pulls it off. The absence of sub-optimal moves can be ascertained by extensive computer analysis these days, so the quality of the moves is not in question.
For amateur chess players, playing a correct chess game is of course even harder. And if we talk of blitz chess - the kind of game where each player has only 5 minutes to do all the moves - this becomes almost impossible. So I am quite happy to report that, to the best of my understanding (I did not check with a computer yet), I did play a blitz chess game which is indeed flawless. And it is a miniature: this is what a very short, decisive game is called.

It is a remarkable fact in chess that the strongest moves are often unconventional, or surprising: they involve the sacrifice of material. The goal of chess is to capture the enemy king, and anything else is expendable if you can achieve that; but practice shows that one's pieces must be carefully looked after, as even a slight deficit can be paid dearly. So in a flawless game one can expect to see brilliant sacrificial moves, which are uncommon in regular practice.

When we talk about material sacrifices, they can be divided in two classes. There are the combinations, where the sacrifice is temporary or when it directly results in mate; these are the "less noble" ones, as the benefits of the sacrificed material can be calculated and assessed precisely. And then there are the positional sacrifices, where the payoff is not material, but rather the infliction of a distinct, persistent defect in the opponent's position. The sacrifice we see in this game is positional.

The game I present here was played yesterday evening on the chess24 site (www.chess24.com) against a player of roughly my strength - we are both rated around 2400 Elo points on the site (my official Elo is much lower, in the lower 2000's, and I believe the chess24 blitz Elo is inflationed by having beginners automatically start with 1500 points, while they should probably start at 1200). Here it is, without much further ado. I am white (my handle is AllHadronic).

This is an old variation in the Scotch game. Black tries to seize the initiative by a direct attack on the e4 pawn. Practice has shown that white can jettison the pawn in exchange for better development, and that is what I am used to play - although, after my next move, there is not much theory to know, so we are both on our own. 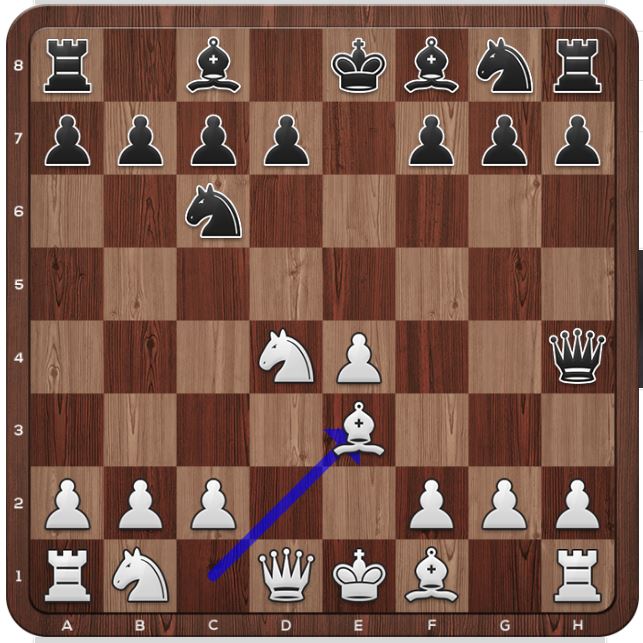 With this check, black is trying to develop his pieces before defending the attacked c7 square. However, this strategy backfires, as he will soon be forced to part with the darksquared bishop, leaving his dark squares hopelessly weak for the remainder of the game.

Black needs to defend against the threat of Nxc7, and the king move is the best one, as defending with the queen runs into bigger trouble: 8. ... Qe5 9.0-0-0!, and Bf4 followed by checks on the e- file give white the advantage.

One single mistake, and the game is lost. Black wants badly to play this move and repel the b5 knight, but the attempt fails spectacularly (diagram). 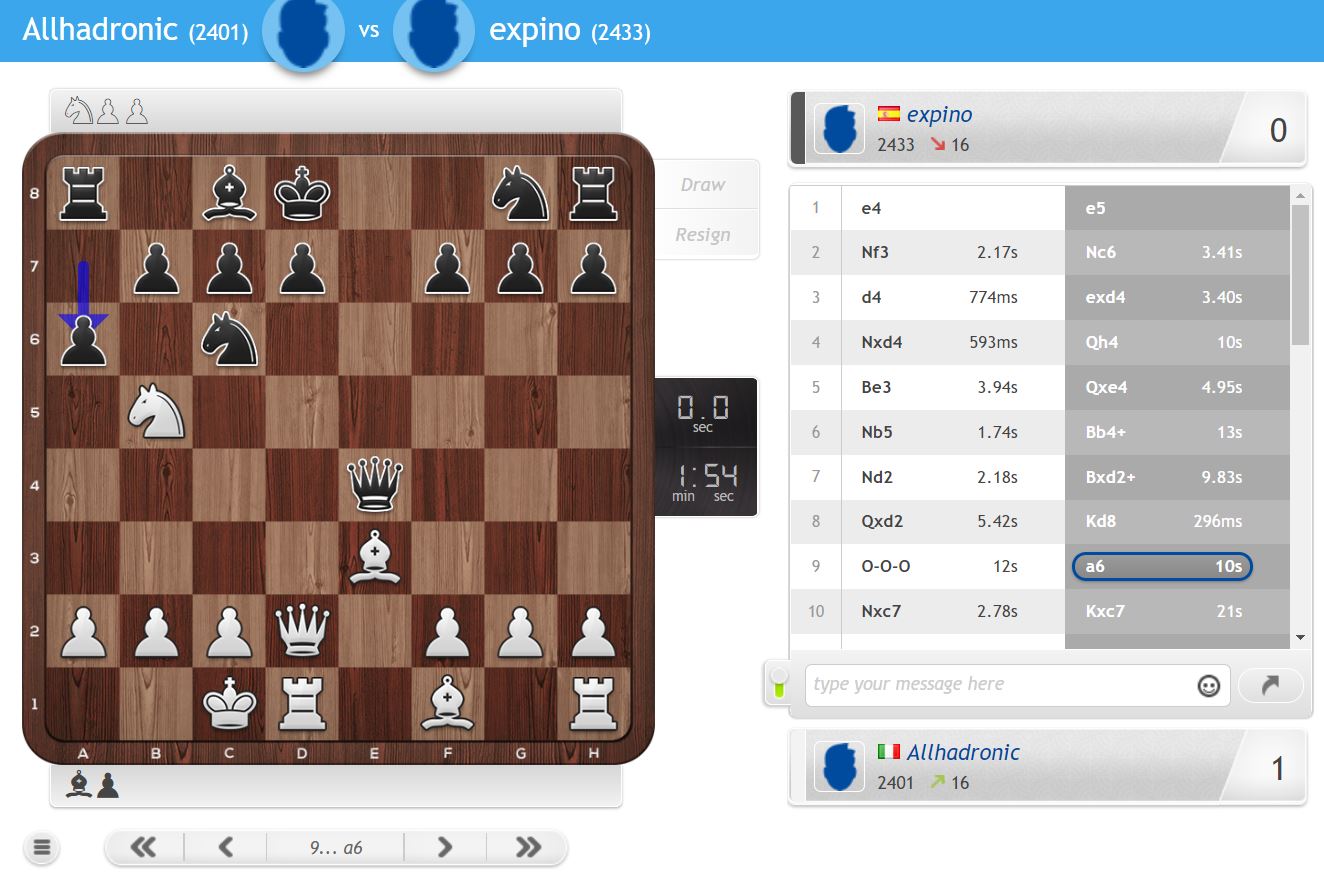 I attached the full screenshot of the board at this point, to show, not without pride, that I thought over my next move for 2.78 seconds. The knight _wants_ to be sacrificed on c7, as this will consacrate the dark squares to white's dominion until the end of the game.

a positional sacrifice, aimed at the dominion of the dark squares. 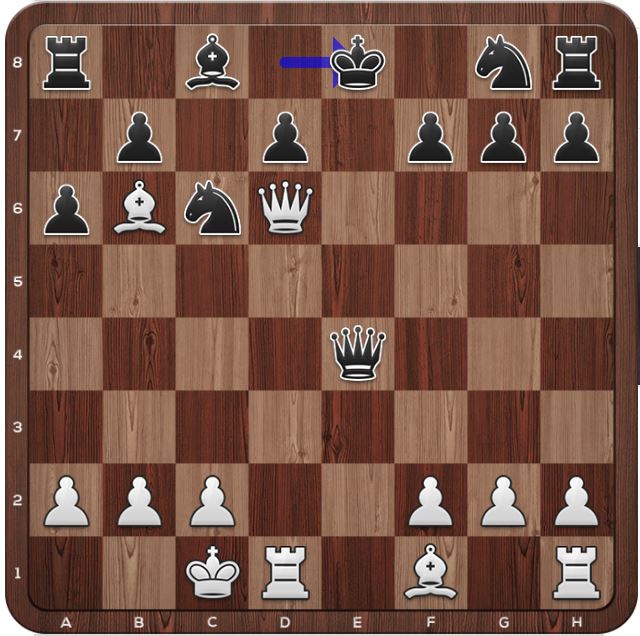 White is down by a piece, so if his attack does not concretize in a material gain or mate, he risks losing the game. Although white's compensation for the material deficit should be clear to any observer of the above diagram, here it might look as if black has a chance to consolidate by developing his g8 knight to e7, moving his king to f8, and then slowly regain control. What would you play in the position? To be fair, there are several winning moves - a simple one, for instance, is 13.Bd3 Qh4 14.Rhe1+ Nge7, when white does not even need to avoid the queen exchange, as e.g. 15.Re4 Qh6+ 16.Qxh6 gxh6 17. Rde1 still wins. But I argue that the move I found at the board is the most aesthetic one and it is quite strong:

The simple plan is carried through (diagram). 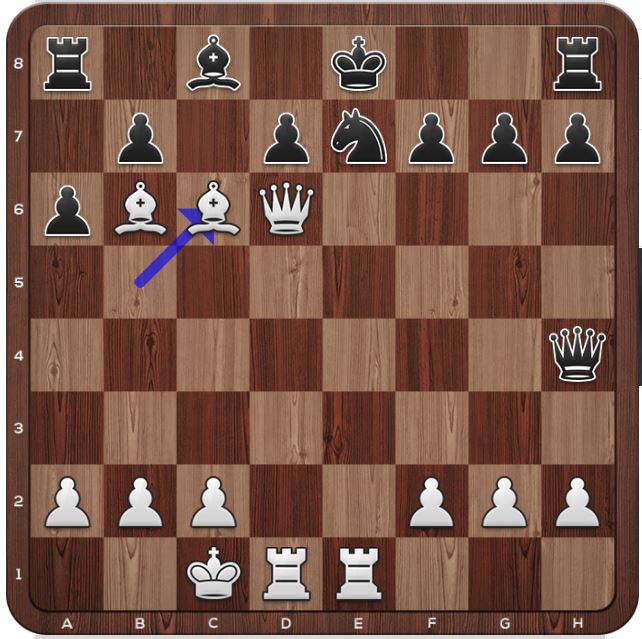 Black chooses to not regain the piece as if 15. ... bxc6 16.Bc5 it would be curtains; but the outcome is not different. 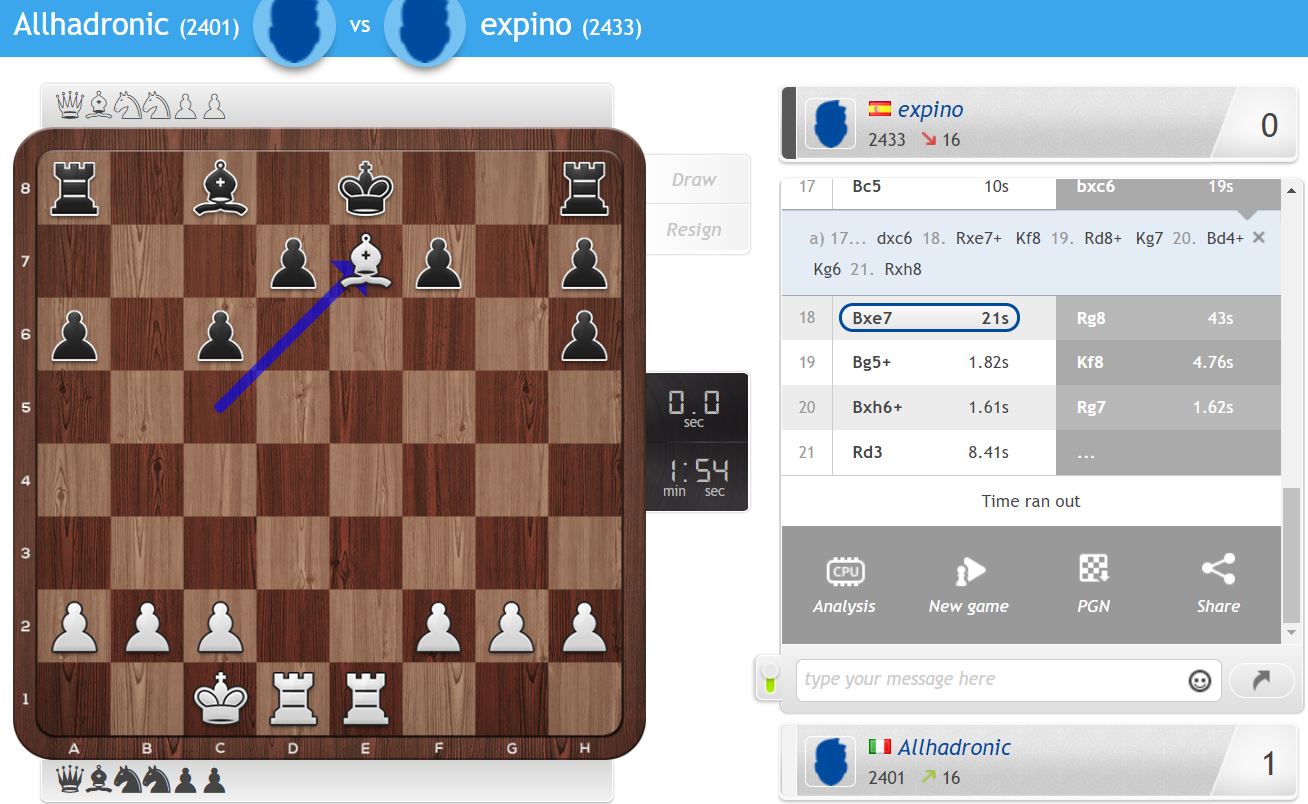 While the material is now perfectly even, and the presence of opposite-colour bishops could in 99% of other positions spell the complete equality of the game, in the present instance black is routed. The advantage of development of white is overwhelming - all his pieces cooperate in the attack, while it looks as if black has not moved a single piece yet! Now the threat is Bf6+, and this cannot be parried in any way.


and in this hopeless position black lost on time. White's plan is to pick up the g7 rook with Rg3-xg7.