Tommaso Dorigo
Everybody seems to be talking about this new would-be particle, allegedly observed in diphoton decays in this paper by Kh. Abraamyan et al. at JINR, and consistent with an earlier claim of two physicists (van Beveren and Rupp) who had considered several distributions published by different collaborations. I will not discuss the story here since it has been done already in two posts here at Science 2.0, but rather provide guidance to those of you who trust my judgement.

And here it is: this is not a new particle. This is wishful thinking.

I first of all need to admit that I spent less than 15' on the original paper by van Beveren and Rupp to convince myself that this was not a result worth taking too seriously. I am sorry to be such a biased sceptic, but when it comes to bump hunting I have quite a bit of experience to sit on top of, and experience is something hard to hide in a closet and forget about.

Bump hunting requires rigorous checks of one's understanding of background distributions. This is a must, it cannot be done without. And it requires a-priori motivated selection cuts applied to the data: without this, researchers can tune the cuts and obtain bumps anywhere they like. And bump hunting requires one to demonstrate that one's detector has the required resolution, and show that the mass resolution is compatible with what is then observed. It requires a calibration of the mass measurement. It requires detailed Monte Carlo simulations - these could be waived forty years ago, not now. And it requires complex statistical analysis, which is not usually in the baggage of the average physicist. Well, none of the above is evident in the paper claiming the new boson. But let me first discuss the original van Beveren-Rupp article. 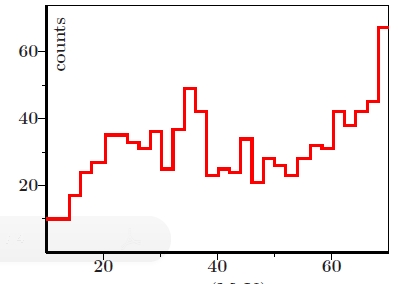 That whole van Beveren-Rupp paper is a list of blips and high-bins in complex invariant mass distributions, whose shape is absolutely not known nor justified by the authors. It seems like if you have a distribution such as the one on the right, which you have no idea what physics determines, you can instantly get enamoured with two high bins at 38 MeV or so, and that would constitute evidence for a new particle.

Or that, by subtracting off a Gaussian distribution (green histogram) from a mass distribution of dimuon plus dipion events reported by Babar (in black in Fig.2 in their paper, pasted below), one can make inferences about the residuals (in red in the lower inset). What on earth tells them the original distribution should be a Gaussian (it isn't, anyway; at lowest order it is a Lorenzian convoluted with a Gaussian, but higher-order radiative effects make it much more complicated, and systematical effects on the mass resolution make the Gaussian convolution non Gaussian anyway), the reader is left wondering. Not to mention that if one assumes that the energy scale is offset by 10 MeV the residuals completely change shape! 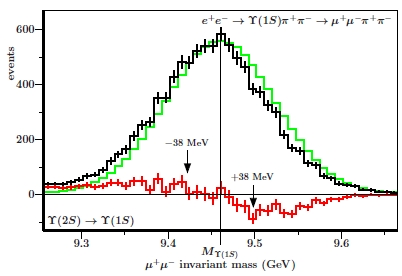 Okay, enough about the van Beveren-Rupp paper. Instead, the new claim is based on a real analysis (meaning that it is first-hand look at real data, and not a collage of second guesses on published results). What does the new paper (Kh. Abraamyan et al., "Observation of the E(38) Boson") show ? It is a study of diphoton events resulting from proton-target and deuteron-target interactions, collected by a spectrometer at JINR. 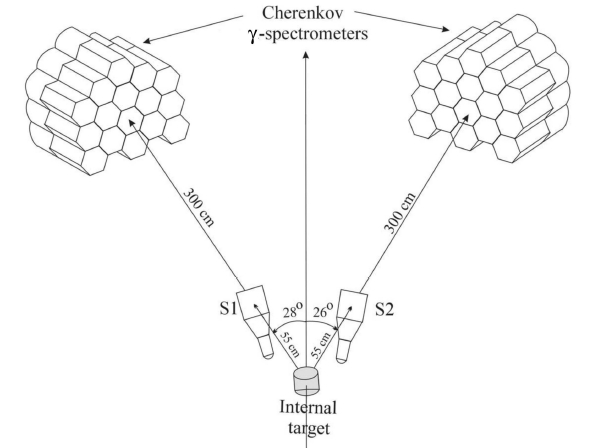 Deuterons in the beam have energies of 2 and 3 GeV, protons of 4.6 GeV. This low energy is of course quite adequate to study the low-mass spectrum of the produced photon pairs. I do not know in detail their detector (see a sketch on the right), so I have no means of speculating on the mass resolution they expect for photon pairs at small angle. From the sketch it seems that their cherenkov cells are situated at 355 cm from the proton target, but we do not know the dimension of the elements to make some inference on the angle resolution etc. Unfortunately, the paper does not spend many words on these crucial ingredients of any particle search.

They select photons in the same arm of their spectrometer, having energy above 50 MeV. Their sum is initially constrained to be in the 300-750 MeV range, and their angle satisfies cos θ < 0.997. The reason of these kinematical cuts is not explained to the reader, and I know that such cuts shape quite a bit the mass distribution of the two objects; the angle cut is probably meant to select photons in different detector elements, other cuts appear unmotivated.

One would expect that they control the expected shape of continuum background photons (arising from many processes, the most important being the decay of neutral pions and bremsstrahlung) with accurate methods, but alas, this does not appear to be the case. In the paper there is absolutely no discussion of how they determine the background. One is bound to blindly believe that it is perfect, unaffected by systematics, etcetera. Instead, authors proceed to fit the background-subtracted distributions they observe using a Gaussian shape. They do so for several sets of data coming from different reactions and different beam-target interactions. They change the energy and angle cuts of the photon pairs in each selection without explaining in any way the rationale of the choices.

At the end of the article they attempt, in truth, to put up some defence. They show a questionable reference signal of neutral pion decays to photon pairs, and produce a simulation which they compare to one of their background spectra. I would say this is far too little and too late to be taken seriously.

Finally, they produce fit results with a ridiculous number of decimal places. I am sorry to be blunt and a bit harsh, but this detail by itself shows they do not have a clue. If a student of mine comes in with a thesis containing a similar mistake, I am likely to kick him out of the door in no time ! A serious paper would never contain five decimal places in a fit mass error. Check it out on the left. (This is repeated several times in the paper).

In conclusion, I do not give much weight to this "find". And I am willing to bet $1000 that this claim will never be confirmed and accepted by the particle physics community. The discovery of elementary particles is a serious business, and the knowledge of mankind progresses with difficulty in the investigation of the subnuclear world. Care is required first of all in how the analyses are performed; but care is also required in explaining one's results and convincing the reader! Even if the boson at 38 MeV were true, authors of the new paper have failed spectacularly on the second, crucial task.
A Quantum Diaries Survivor
More Articles All Articles
About