Tommaso Dorigo
UPDATE: some technical considerations on the measurement are available in a followup post I wrote after attending a seminar on the new result today. In particular, one startling consideration emerges - if the reading of the 20 MHz Opera clock were off by just one tick, the result would be compatible with v=c.

UPDATE: you can download the new Opera paper at this link. You will need to use the username and password "neuvel".

The OPERA Collaboration sent to the Cornell Arxiv an updated version of their preprint today, where they summarize the results of their analysis, expanded with additional statistical tests, and including the check performed with 20 additional neutrino interactions they collected in the last few weeks. These few extra timing measurements crucially allow the ruling out of some potential unaccounted sources of systematic uncertainty, notably ones connected to the knowledge of the proton spill time distribution.

These benefits come from CERN, where proton bunches have been made much shorter: down to three nanosecond long pulses. That means that OPERA can measure the speed of each detected neutrino separately! Of course, with such short pulses, the statistics of protons on target is "only" of 4x10^16, but this is still enough to reach meaningful results from the additional data.
The figure below show the timing structure of the proton bunches. The black arrow spans 20 nanoseconds to size up the horizontal scale. 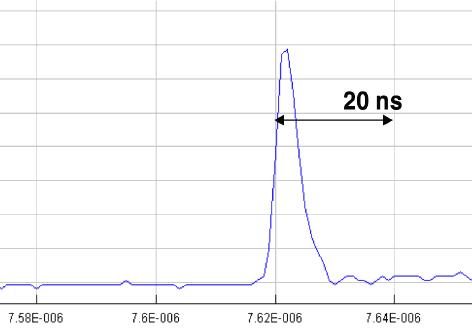 As a sidebar to the improvements yielded by the reduction in the pulse duration, and the related checks that were performed on the source, apparently allowed CERN to spot some less than perfect sinchronisms in the apparatus responsible for the creation of the beam. In particular, the horns that focalize the beam are brought to the right magnetic field by currents that are ramped up before the particles pass through them. It transpired that due to some imperfect arrangement, the currents might still have been ramping up during the passage of the particles, with the result that the focusing of the beam could be less good than predicted.

This might bring into the Opera speed measurement some systematics due to the fact that the neutrinos produced later -the trailing ones from the spill- woud be better focused (field closer to plateau in the horns). However, this potential issue is made irrelevant by working with very narrow proton pulses (however ramping, the current is practically constant during a very narrow proton spill).

So what does OPERA find ? Their main result, based on the 15,233 neutrino interactions collected in three years of data taking, is unchanged from the September result. The most interesting part of the new publication is instead that the  find that the 20 new neutrino events (where neutrino speeds are individually measured, as opposed to the combined measurement done with the three-year data published in September) confirm the earlier result: the arrival times appear to occur about 60 nanoseconds before they are expected.

The figure below, taken from the paper, shows the individual timing measurements of the neutrino interactions from the narrow spills taken between end of October and beginning of November. The red line indicates the average of the 20 measurements. 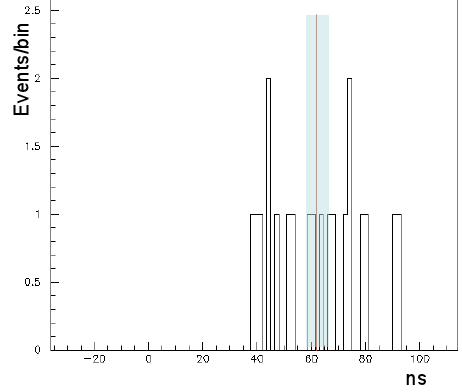 It is necessary here to note that since distance from source to detector and time offsets necessary to determine the travel time of neutrinos have not been remeasured, the related systematics (estimated as well as -possibly- underestimated ones) are unchanged. The measurement therefore is only a "partial" confirmation of the earlier result: it is consistent with it, but could be just as wrong as the other.

Just to make an example, I will reiterate here the doubts I have on one of the time offsets necessary to obtain the timing measurement in Gran Sasso: an 8-km-long light guide brings in a 40,000+-1 ns offset: in order to determine a "delta t" of 60 nanoseconds, a subtraction of that large number has to be made. This offset was measured three years ago, and could have changed if the refraction index had changed even very slightly (e.g. due to aging of the plastic material). This offset was not remeasured in the new analysis, and the possible associated systematic uncertainty remains in my mind an issue.

One peculiar aspect of the new neutrino interactions is that they highlight the presence of a rather large "jitter" effect: the timing of each neutrino interaction appears to be subject to a "smearing of width of the order of 25 nanoseconds. This could imply that something in the timing measurement is not well under control. Note that such a jitter could not easily be spotted in the global time distribution of the 15,223 neutrinos collected in the last three years; its effect on the global probability density function (which spans 10.5 microseconds) is too small to produce a global shape difference.

Another note is that OPERA accepted the criticism moved by many on the technique of producing a global probability density function for all proton spills, to compare it then to the observed neutrino timing distribution. They performed a measurement where they analyze the data without adding the functions, and they obtain a consistent result.

Regardless of all the considerations I made above on systematic uncertainties that might still affect the measurement, I must say I am rather positively impressed by at least a couple of things: first, that Opera has worked like a single man in the attempt of making more solid an already quite scrupulous result; and second, that the OPERA researchers seem now to stand behind the measurement much more united than they were two months ago.

In other words, those in OPERA who did not sign the first preprint - because they probably did not have enough time to scrutinize all the aspects of the measurement - are now apparently all willing to sign the new one, and probably ready to submit the resulting publication to a scientific magazine. Since I know several members of OPERA and I judge them all serious and scrupulous physicists, their willingness to sign the paper means that we need to take it more seriously than (at least a few among us) have so far.

UPDATE: I was wrong on that one. It was pointed out to me by a member of Opera that while four of the physicists who had not signed the paper in September now accepted to sign it, four more who had signed the first one now dropped out of the new one! A quite mysterious thing in my opinion, maybe brought by the fact that some (small) mistakes were indeed found in the original analysis (none affecting much the result, however).

Here is a quote from the conclusions in the Opera article:

"To exclude possible systematic effects related to the use of the proton waveforms as PDF for the distributions of the neutrino arrival times within the two extractions and to their statistical treatment, a two-week long beam test was recently performed. A dedicated CNGS beam was generated by a purposely setup SPS proton beam. The modified beam consisted of a single extraction including four bunches about 3 ns long (FWHM) separated by 524 ns.

With an integrated beam intensity of 4×1016 protons on target a total of 20 events were retained, leading to a value of δt measured from the average of the distribution of (62.1 ± 3.7) ns, in agreement with the value of (57.8 ± 7.8) ns obtained with the main analysis. At first order, systematic uncertainties related to the bunched beam operation are equal or smaller than those affecting the result obtained with the nominal CNGS beam."

"In conclusion, despite the large significance of the measurement reported here and the robustness of the analysis, the potentially great impact of the result motivates the continuation of our studies in order to investigate possible still unknown systematic effects that could explain the observed anomaly. We deliberately do not attempt any theoretical or phenomenological interpretation of the results."

What will happen next ? Other experiments are already planning equivalent measurements, of course. We owe it to OPERA and its six-sigma result to have opened (or should I say widened, given the previous less exciting measurement by MINOS?) a new avenue of investigations of the physics of neutrinos: a unexpected one, for sure, and probably one which will not bear fruit in the end (but this of course is my personal bias) - but nonetheless some interesting fresh air in neutrino physics!

Following theOPERA collaboration's presentation at CERN on 23 September, inviting scrutiny of their neutrino time-of-flight measurement from the broader particle physics community, the collaboration has rechecked many aspects of its analysis and taken into account valuable suggestions from a wide range of sources. One key test was to repeat the measurement with very short beam pulses from CERN. This allowed the extraction time of the protons that ultimately lead to the neutrino beam to be measured more precisely.

The beam sent from CERN consisted of pulses three nanoseconds long separated by up to 524 nanoseconds. Some 20 clean neutrino events were measured at the Gran Sasso Laboratory, and precisely associated with the pulse leaving CERN. This test confirms the accuracy of OPERA's timing measurement, ruling out one potential source of systematic error. The new measurements do not change the initial conclusion. Nevertheless, the observed anomaly in the neutrinos' time of flight from CERN to Gran Sasso still needs further scrutiny and independent measurement before it can be refuted or confirmed.

On 17 November, the collaboration submitted a paper on this measurement to the peer reviewed journal JHEP. This paper is also available on the ArXiv preprint server

So, Opera now publishes the results in JHEP. The objection that the result was preliminary is thus off the table....