Tommaso Dorigo
Little less than one year ago the world of fundamental physics was shaken by the bold claim of the OPERA collaboration, which produced a measurement of the time of flight of neutrinos traveling underground from Geneva to the Gran Sasso mine in central Italy. The beam of neutrinos, produced by the CERN SpS proton synchrotron, was observed to produce interactions in the large mass of the OPERA detector with about 60 nanosecond anticipation with respect to what would be expected for a particle traveling at exactly the speed of light (2439096.1+-0.3 nanoseconds, since the flight path is of 731221.95+-0.09 meters).

Following the CERN announcement of the OPERA result physicists around the world busied themselves with pointing out several issues with the measurement, among which the statistical analysis of the data, the precise measurement of several delays in the detection process, and other hardware components, and remained generally quite cold. Of course the experimental proof that neutrinos traveled at a speed faster than c, the speed of light in vacuum, would be a datum impossible to reconcile with known physics. The result had a statistical significance of six standard deviations if one believed all uncertainties, but in fact this was the center of the discussion. Could the total timing error be believed ? I pointed out in this blog that I did not believe the precision of the time delay introduced by a light fiber (40000 nanoseconds, with a claimed accuracy of 1 nanosecond!).

In contrast, the general public received a flood of information from newspapers and blogs that over-hyped the result, claiming Einstein had been proven wrong, and casting under bad light the whole "establishment" of research in fundamental physics.

After the announcement of last September new experimental results were produced; one, again by OPERA, confirmed the original find with the analysis of some additional neutrino interactions obtained from a short-bunched CERN beam designed expressly for the test. The competitor experiment ICARUS, another neutrino detector in the Gran Sasso mine exposed like OPERA to the CNGS beam, found instead results in conflict with the claimed superluminal velocity of neutrinos. Theoretical arguments implied that, unless one assumed further anomalies in the behaviour of neutrinos, these particles should lose energy if superluminal, but ICARUS did not see such an effect. Also a reanalysis of the data from NOMAD found an inconsistent picture in this respect.

It took a few more months before OPERA traced the source of the 60 ns difference between expected and observed signal timing to a loose cable in one of its electronic crates. In the meantime, ICARUS produced independent measurements of the time of flight, finding results in complete accord with neutrinos traveling at light speed, and not faster. 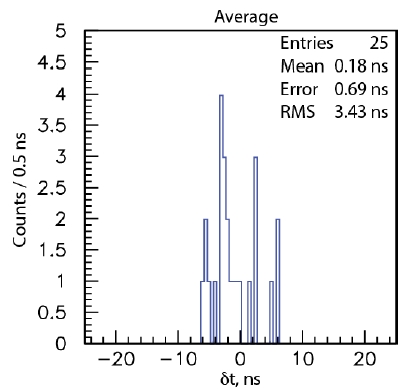 Now ICARUS has published a new result, much more precise than the former one, obtained from another dedicated run in May this year. They collected 25 neutrino interactions, and due to the better designed experimental conditions and the availability of four different synchronization methods, the uncertainty in the time difference (arrival time of neutrinos minus expected arrival time for particles traveling at light speed) is now really very small. Of course the result is consistent with zero: -0.18+-0.69+-2.17 ns. I would say this is a rather definitive proof. An upper limit on the speed of neutrinos is also set at 1.0000016, at 95% confidence level. On the right you can see the distribution of time differences for the 25 neutrino interactions, which is well-centered around zero.

So, neutrinos are not superluminal, as many of us had trusted all along. Science proceeds by trial and error, and this time error preceded trial, but otherwise the scientific process was disciplined: a claim is put forth, it is put to the test, and finally disproven; the original claim itself is then found to arise from human error. This time we also had the positive result that the person responsible of the too bold claim paid in person by having to leave the place of spokesperson of the experiment. The only thing that did not work well in this context is the fact that the result received too much exposure by the media... But it is better to have overhyping of false results than censorship!
A Quantum Diaries Survivor
More Articles All Articles
About