Tommaso Dorigo
The saga of the superluminal neutrinos took a dramatic turn today, with the publication of a very simple yet definitive study by ICARUS, another neutrino experiment at the Gran Sasso Laboratories, who has looked at the neutrinos shot from CERN since 2010.

The ICARUS team jumped on the chance to test the Opera result based on the article recently published by Cohen and Glashow. The latter argue that superluminal neutrinos should lose energy through  neutral-current weak-interaction radiation -the analogue of Cherenkov radiation for a neutral particle. Given a neutrino moving at a speed v>c as the one measured by Opera, and given the distance traveled to the Gran Sasso cavern, one can relatively easily compute the energy spectrum of observable neutrinos at the cavern, given the production energy spectrum.

The physics is a bit more complicated than I summarized it in the paragraph above, but really, you need not squeeze your brains: there is nothing much to know. What is important is that there is a clean and simple relationship between the superluminal speed and the rate of decrease of the neutrino energy. Neutrinos at CERN are produced with an average energy of 28.2 GeV, and neutrinos at the receiving end - the LNGS where Opera and ICARUS both sit - should have an average energy of only 12.1 GeV for neutrinos detected via charged-current interaction.

(Above: a picture of ICARUS in the LNGS cavern)

Incidentally, a charged-current neutrino interaction occurs when the neutrino "exchanges" a unit of electric charge, along with weak quantum numbers, with a nucleus. The neutrino thus turns into a muon, while the nucleus breaks apart in a shower of light hadrons. The muon is then very easy to detect and measure.

I can imagine the ICARUS team brainstorming all together at a meeting. Everybody brings about their favourite objections to the timing measurement of Opera. Some argue whether they can redo the Opera measurement. Others pass along the tray of donuts. Then somebody brings up the Cohen-Glashow paper: "Look, it is quite easy: we take neutrino interactions, measure their energy, and compare with various hypotheses for the superluminal speed. All based on known physics and hard facts. Can we do it ? Can we ? OMG wait... We have already those neutrino interactions!"

So off they go, and do their homework. And a very good homework it is: in less than three weeks from the appearance of the Cohen-Glashow paper -yesterday evening-, they publish a preprint. Kudos to them for their speed and focus. True, ICARUS is not flooded with neutrino statistics these days -I could not help chuckling at their honest but a bit vintage description of why they lost this or that event, ending up with a statistics of less than 100 interactions (OPERA has 16000, although they've run for much longer so far). But those less-than-100 neutrinos do kick ass.

In fact, what do they find ? 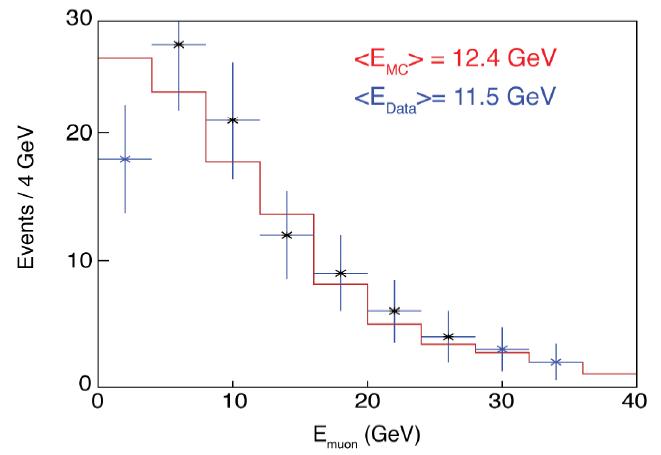 (Above: the distribution of muon momenta as detected by ICARUS [black points] is compared with a simulation [in red] assuming that neutrinos retain their energy spectrum in their trip from CERN to LNGS. A much leaner distribution would be observed if neutrinos were superluminal.)

They find that the energy spectrum of the detected neutrino interactions in ICARUS shows a very nice agreement with the expectation for well-behaved light-speed-moving neutrinos. A very dramatic distortion of that spectrum would instead be expected for the speed measured by OPERA, such that indeed ICARUS can place a very tight constraint on the superluminal speed of the CERN neutrinos: consistent with the speed of light, and not larger than that by more than four part in ten billionths. An order of magnitude looser than the limit obtained with the neutrinos from SN1987a, but still quite tight -and certainly excluding without argument the value of 50 millionths measured by OPERA.

If you are unfamiliar with millionths and billionths, I can make it easier for you: the ICARUS result says that the difference between the speed of neutrinos and the speed of light cannot be as large as that seen by OPERA, and is certainly smaller than that by three orders of magnitude, and compatible with zero.

So, forget superluminal neutrinos. Or maybe not: what remains to be seen is whether other experiments will find results consistent with v=c or not. That's right: regardless of the tight ICARUS bound, every nerd with a neutrino detector in his or her garage is already set up to produce an independent confirmation of the startling OPERA result... We'll soon see measurements by MINOS and Borexino, for instance. Interesting times to be a neutrino expert are these!

As for me, I can chuckle and archive this umpteenth 6-sigma anomaly in the Zoo of wannabe new physics results. Physics is hard, folks - you can't expect to be dealt a straight flush all of the times.
A Quantum Diaries Survivor
More Articles All Articles
About