Tommaso Dorigo
The Arxiv today features a quick-and-dirty study of the occurrence of electron-positron pair signal in the NOMAD detector, which obtains very strong bounds on the superluminal behaviour of energetic muon neutrinos like the ones whose speed has been recently and famously measured by OPERA.

A few punctualizations: first of all when I say "quick and dirty" it should not be read in the pejorative sense: it is a reasonable study which makes some approximations, which are inessential for the conclusions that the author (P.Cattaneo) reaches. Of course if the study is quick and dirty it means it could be done more carefully and cleanly, as the author in some way acknowledges; but it clearly transpires that the result would not end up being much different.

Second, you might be wondering what have electron-positron pairs to do with neutrino speeds, and what the heck is NOMAD. So let me make a step back for the benefit of those of you who do not know the answer to these two questions. 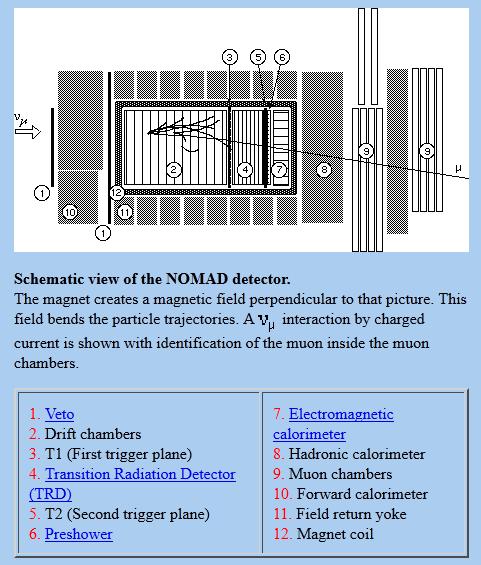 NOMAD first. NOMAD (Neutrino Oscillation Magnetic Detector) is a venerable neutrino experiment which ran in the late nineties at CERN, looking primarily for a signal of muon neutrino oscillations into tau neutrinos. A high-intensity beam of muon neutrinos with mean energy of 24 GeV was provided by the CERN SpS in the years 1996-1998 through the interactions of a total of 40 billions of billions of 450 GeV protons with a beryllium target. A sketch of the components of NOMAD, stolen from the official web site of the experiment, is shown on the right: muon neutrinos arrive from the left, and their charged-current interactions with a nucleus produce a energetic muon and a hadronic shower.

The features of NOMAD make it sensitive to the production of electron-positron pairs produced by the beam of neutrinos as they radiate part of their energy. The radiation process has been shown by Cohen and Glashow to be bound to occur at a significant rate if muon neutrinos in the beam are superluminal. Indeed, already a few weeks ago the ICARUS detector at the italian Gran Sasso laboratories "ruled out" the OPERA speed measurement on the basis that the observed energy spectrum of muon neutrinos did not show any depletion of high-energy neutrinos as would instead be expected if neutrinos were superluminal and thus radiated out energy during their 730-km underground trip from CERN to Gran Sasso.

While the fact that ICARUS does not see the effect of the radiation of electron-positron pairs off the CERN neutrinos is a circumstantial proof that none of that occurs, one could on the other hand ask oneself whether those electron-positron pairs could be visible along the neutrino beam path: a direct observation of those pairs would turn the tables. That is what the author tried to do using the old NOMAD data. Since electron-positron pairs had been searched in NOMAD for other purposes during the lifetime of the experiment, it is a simple matter to dig out the relevant information.

The result is simple: accounting for other sources of electron-positron pairs, no more than O(1) such events can be ascribed to neutrino radiation in the total NOMAD dataset. O(1) is a scientific notation to mean "of the order of one event". What would be the number of observed pairs instead if the neutrinos had been superluminal (with the speed measured by OPERA), and had therefore been arriving into NOMAD radiating part of their energy in the form of converting photons ? It is shown in the figure below. The expected flux of these pairs has been computed as a function of their total using the energy distribution of neutrinos of different species in the beam, accounting for the radiation process which of course depends on the neutrino energy. The pairs predicted to be contributed by muon neutrinos, the ones of which the beam is mostly made of, are shown in black. 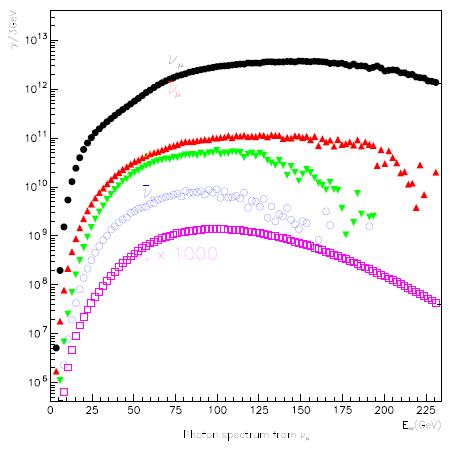 What you should get away is that the vertical scale is logarithmic and that the predicted pairs are not O(1), but O(trillions). So the fact that these pairs were not observed  completely rules out the compatibility of Cohen and Glashow's calculation with the OPERA result. One must accept that either the muon neutrinos from CERN oscillated into some sterile form which did not lose energy by radiation of neutral current in its propagation, or that the speed measurement is incorrect.

Cattaneo uses the data to estimate the fractional surplus of energy above c of all the neutrino species in the beam which would produce O(1) or less electron-positron pairs in the NOMAD data. For muon neutrinos, the bound is of the order of 10^-9, thus of the same order of magnitude of the bound on the superluminal speed of the neutrinos observed from the burst of SN1987A.

Of course after the ICARUS result this is just an additional proof, and all the objections to the conclusions one may draw remain: the radiation might not occur if the neutrinos had some special properties we have so far not understood yet.
A Quantum Diaries Survivor
More Articles All Articles
About