Tommaso Dorigo
The International Conference on New Frontiers in Physics (ICFP) 2012 started today with a rich program of experimental and theory talks. I should be swimming in the Cretan sea in front of the nice conference venue (which is 40 meters away from the water), but my sense of duty forces me to give you some impressions of the presentations I heard.

So the opening talk this morning was given by Babis Anastasiou (see picture below), who discussed the state of the art of Higgs boson production rate calculations at the LHC. He started by describing the various production modes for Higgs bosons. Anastasiou explained that the dominant mechanism, which is the fusion of two gluons, is a loop process, so it is in principle sensitive to new particles we might not know about. The loop depends on a factor (1+O(m_h^2/4m_f^2), where m_h is the Higgs mass and m_f is the mass of a circulating fermion. 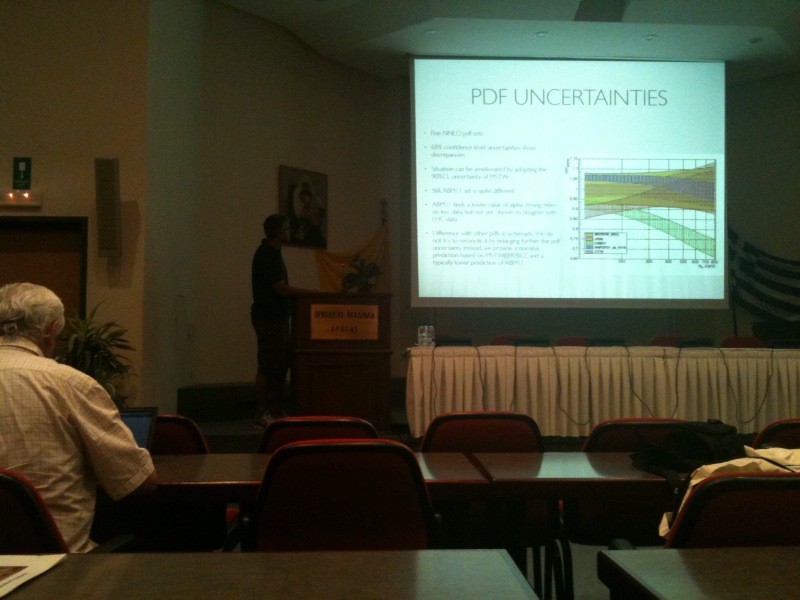 Now, if you "squeeze" the loop into a point -something you can only do if you are a theorist- you get the so-called infinitely-heavy mass approximation. This approximation, which works well with top quark loops because of the large value of the top mass, is very useful because it allows to factorize the different time scales of the process: time scales of the order of 1/m_t are relevant for the top production part, and time scales of the order of 1/m_h are relevant for a point interaction; the separation simplifies the calculation. In an effective-Lagrangian approach one would have a Wilson coefficient C(M_t) which would encapsulate the new models' input in the production mechanism. That means being able to "plug in" very simply any new physics.

Anastasiou then discussed the sources of uncertainty in the cross section calculation. The cross section can be written by a sum over initial states of the integrals of the point cross section over the momentum distribution functions of those initial state objects. This is the factorization integral, which is called this way because even here the different scales of the processes "factorize": parton distribution functions have their own soft scale, and the hard subprocess we are interested in has a scale of energy of the order of magnitude of the mass of the produced particle.

Overall the precision of the Higgs boson cross section is presently of the order of 10-20%. The speaker then presented a new program called ihixs, meant for inclusive Higgs boson cross section calculations at the LHC. The program incorporates in the calculation QCD corrections through next-to-next-to-leading-order calculatiosn (NNLO), quark-mass effects through NLO QCD calculations, mixed QCD-Electroweak corrections, and the accounting of the finite width of the Higgs. This constitutes a painstaking checking or recalculation of all higher order contributions, extending it to include consistently non-SM Yukawa couplings. It is a beautiful tool for studies of the Higgs couplings. It currently relies on manual input or the HDECAY program for the width and branching ratio, but soon it will perform automated calculations even with anomalous Higgs couplings.

After Anastasiou, there were two experimental talks, discussing the Higgs boson searches in ATLAS and CMS. The ATLAS speaker showed their combination, which has a significance for the Higgs excess at 126 GeV sizably reduced with respect to the result ATLAS had shown last winter: the local significance is now 2.6 standard deviations. CMS instead quotes a local significance of 3 standard deviation at 124 GeV. I was slightly surprised by hearing from the speakers that these results allow no conclusions to be drawn. Indeed, for the there is a very strong conclusion we can draw: the results, taken together (or even each by itself, with slightly looser inference), allow to say that if the Standard Model Higgs boson exists, we know its mass already to better than 10 GeV accuracy !

Following the Higgs talks, there were talks on Lattice QCD by Hoelbling and on String Theory by Antoniadis. I will not summarize these presentations, but maybe just mention that Antoniadis is dissatisfied with the present status of SUSY, which by now shows a level of fine-tuning of one percent to one permille. This "little hierarchy" problem already seems enough to twart theorists: Antoniadis also said that a Higgs at 125 GeV would make this fine tuning severe for SUSY in its minimal version. One can modify it by adding an extra singlet or split families, but in any case with a 125 GeV Higgs it will become important to measure the Higgs couplings -unsurprisingly. 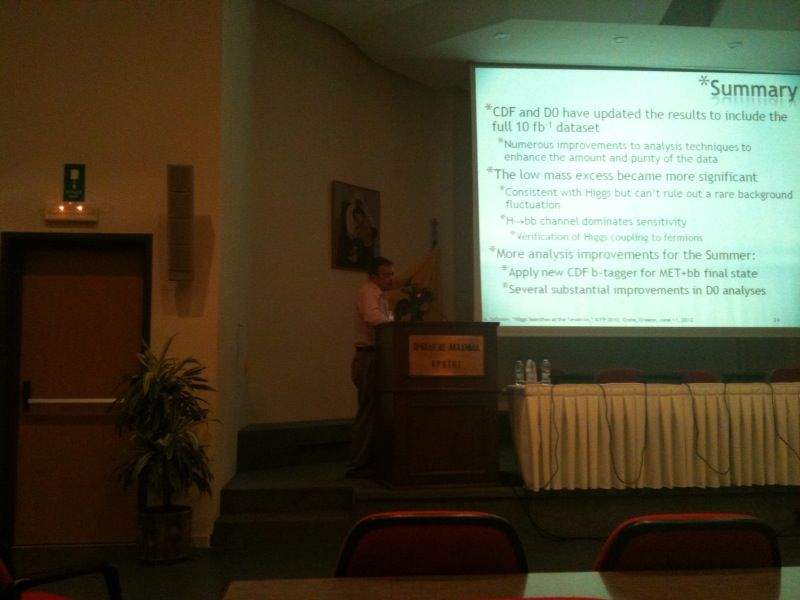 In the afternoon I could hear my friend Alexey Safonov (see picture above - apologies for the lousy iphone quality), an old-time colleague from CDF, discuss the Tevatron Higgs boson searches.  He started by making the point that the Tevatron still competes thanks to the associated WH and ZH production modes, which have a cross section "only" four times smaller at 2-TeV than they do at 7 TeV, while gluon-fusion modes increase by a factor 16 in going from one side to the other of the Atlantic. The datasets in the Americas are still twice as big (until CMS and ATLAS will open their boxes of 2012 data, that is), so there is still something to learn from Higgs searches in the new continent.

The combination of the full datasets collected by CDF and DZERO and the improvements of the analysis techniques allow the Tevatron average to be still competitive with the LHC experiments taken singularly: there is indeed a 2-sigmaish excess from the combination which is compatible with the presence of a Higgs signal, and with the LHC signals. Alexey promised further improvements (especially in the DZERO analyses) for ICHEP next month, but I assume these will be minor.

Finally, I am presently lingering in the parallel session on experimental HEP, where two CMS colleagues (Saoulidou and Meneghelli) have just presented results in SUSY and Higgs searches (in the ZZ final state). But I will stop here for this piece is already twice as long as I wanted to make it...
A Quantum Diaries Survivor
More Articles All Articles
About