Tommaso Dorigo
Totally overshadowed by the news of the new Opera measurement of neutrino speeds, yesterday CERN officially released the combined result of ATLAS and CMS searches for the Higgs boson. The news has been given already in two prominent particle physics blogs (Resonaances and Not Even Wrong), so I think I am not obliged to do anything more than point you to those, who cover the matter quite accurately.

Furthermore, both Jester and Peter also point out that the result was precisely anticipated by an independent analysis at the VixRa blog by Philip Gibbs. Doing combined limits on Higgs masses is not conceptually harder than doing the weighted average of two measurements, although immensely more complicated (incidentally: about just how hard it is to make the weighted mean of two measurements of a random variable I will have something to write tomorrow, as I will try to explain the meaning of my latest "guess the plot").

Despite all that, I do want to write here my personal thoughts on the message that the combined LHC result provides. Let us take the figure which shows the upper limit in units of "times the Standard Model cross section", as a function of the unknown value of the Higgs boson mass: see below. 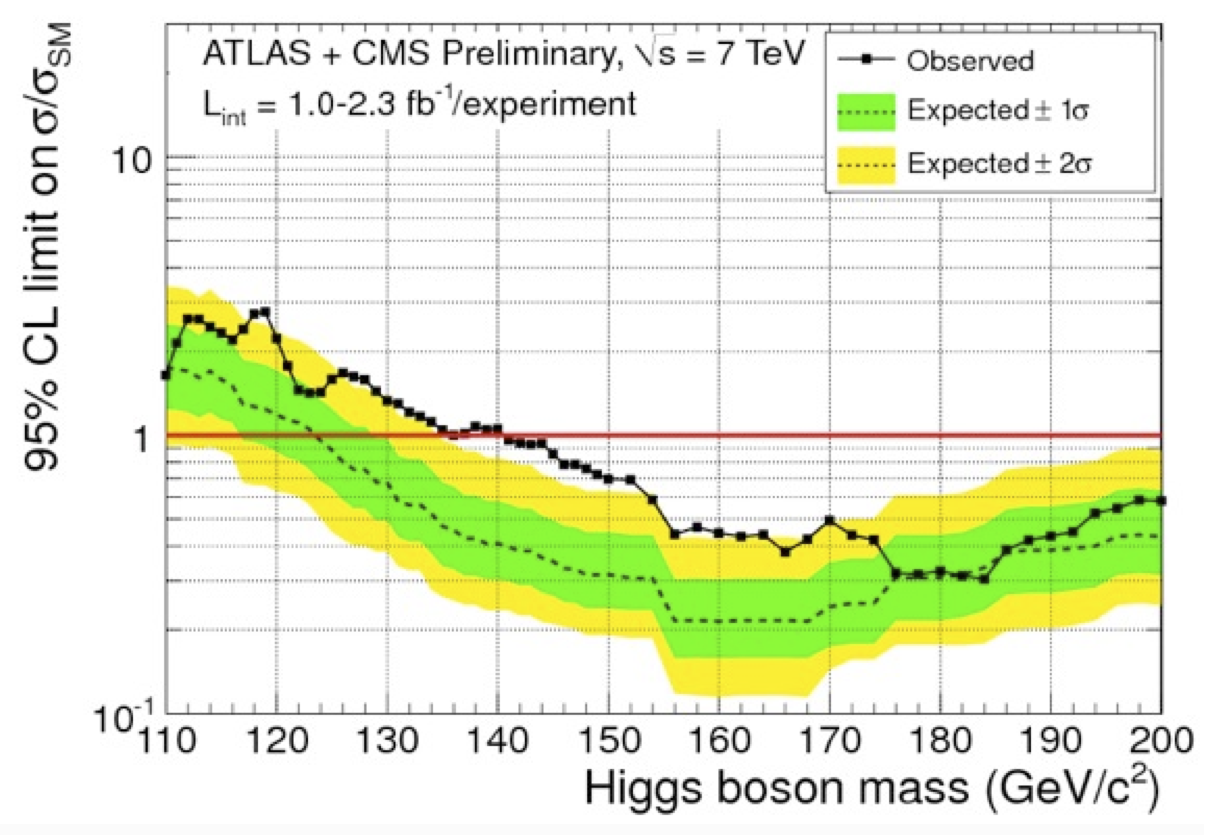 Although most of you already know what the plot signify, I reiterate its meaning: the black curve shows  as a function of the hypothesized Higgs mass how large the Higgs boson cross section can be without coming in conflict with the experimental observations of ATLAS and CMS, who did not see any evidence of an excess of events in any of the dozen channels they have sought the darn particle. The cross section is calculated in units of the predicted SM value (which is also a function of Higgs mass), such that by comparing the location of the black curve with the horizontal line at 1.0 you immediately get to see where the Higgs boson cross section has been constrained to be smaller than what the SM predicts: all points of the black curve laying below 1.0 correspond to Higgs boson mass values which are experimentally excluded, at 95% confidence level.

Now, the "brazil band" in yellow and green show what limit was predicted by ATLAS and CMS they would set, given the experimental methodology and available statistics, in case the Higgs did not exist anywhere in the mass range investigated. The agreement of the black curve with the brazil band indicates that the data did not fluctuate up or down too much -observed event counts are consistent with expectations. Small departures here and there are however still visible. Let us then concentrate on those.

You may see, for instance, that there is a upward fluctuation of the observed limit at 120 GeV; another fluctuation spans a broader range between 135 and 150 GeV. Which of the two is consistent with the possible contribution of real Higgs events ?

By eye it would not be possible to answer this question, although of course the 120 GeV fluctuation occurs in a region where the black curve is head and shoulders above the line at 1.0, indicating that there the Higgs is alive and well; while the broader fluke around 145 GeV is fighting with the line and losing the battle. Let us instead look at the much more interesting figure shown below, which indicates what is the "best fit" value of the Higgs cross section given the data, in units of the Standard Model cross sections and again as a function of Higgs mass. 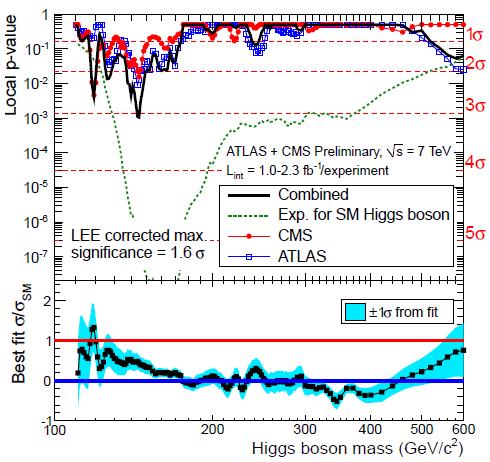 The figure is horribly complicated, so let me guide through it. The upper portion shows the "local p-value" of the observed event count seen by the two experiments, once different final state results are combined. All is as always as a function of the unknown Higgs mass. If you concentrate on the black curve (combination of red and blue), you see several downward spikes, corresponding to points where the two experiments saw some upward fluctuation in the number of observed events with respect to predicted backgrounds. Crucially, the dotted green curve shows what kind of "local p-value" (a probability of the fluctuation observed) would be on average seen if the Higgs boson existed. Again as a function of M(H). You thus see that all the downward spikes are much smaller than they would be if the Higgs were there, except one, the one at 120 GeV.

In the lower part of the figure you see (black curve with blue "one-sigma" band overlaid)  the "best fit" Higgs cross section, again in SM units. Here you see that while the 135-150 GeV fluctuation is only consistent with a Higgs boson that has a cross section much smaller than SM predicts, the 120 GeV one is in the right range: in other words, a 120 GeV Higgs (or rather, 119 GeV Higgs, as I predicted some time ago) would fit the bill quite nicely.

At the 2012 winter conferences ATLAS and CMS will present their search results employing three-times more statistics -all the data collected in 2011. By then we will know more about the possibility that the 120-GeV fluke is the real thing. And, since Philip has shown he can combine results quicker than the experiments can, we will then ask him to give the definitive answer, with quite some advance with respect to summer 2012 conferences (when CERN expects that a official combined result will be released)!