Tommaso Dorigo
A couple of weeks ago the CDF and DZERO experiments have produced a combination of their measurements of the W boson mass. Besides two older determinations of this fundamental parameter of the Standard Model, the new 2.2/fb measurement by CDF and the 4.3/fb measurement by DZERO have been averaged together, accounting for correlated systematics. [x/fb is a shorthand for the amount of collisions from which the W boson datasets have been extracted by the experiments: 1/fb is about 80 trillion proton-antiproton collisions.]

The W boson is one fundamental ingredient in our recipe of elementary interactions. It is the particle sought by alchemists who tried to turn lead into gold: the only particle we know that has the power to change the flavour of quarks or leptons. The W was discovered together with its neutral partner, the Z, by the UA1 experiment in 1983 at the CERN SppS collider, and since then it has been one of the main characters in all high-energy studies: nowadays W boson decays are used to identify top quarks, to search for Higgs bosons, and to determine detailed properties of the electroweak interaction.

The result of the averaging exercise of the Tevatron experiments will stand as one of the major legacies of the Tevatron: thanks to it the electroweak boson is now known with a relative uncertainty of less of a five-thousandth; such a precision is relatively rare even for macroscopic quantities (how many of us know our body weight to a dozen grams ?), and for subatomic ones it is really exceptional.

The combination can be seen in the picture below, which lists the four Tevatron ingredients on the top, then their combination, and then the result of combining the four determinations of the W boson mass produced ten years ago by the LEP II experiments ALEPH, OPAL, DELPHI and L3. You should remember that LEP II collided electrons and positrons at twice the W boson mass and above, and was in fact dubbed a "W factory" since a large fraction of the collisions yielded pairs of W bosons. The two Tevatron experiments together have halved the W mass uncertainty of LEP II, bringing it from 35 to 15 MeV. 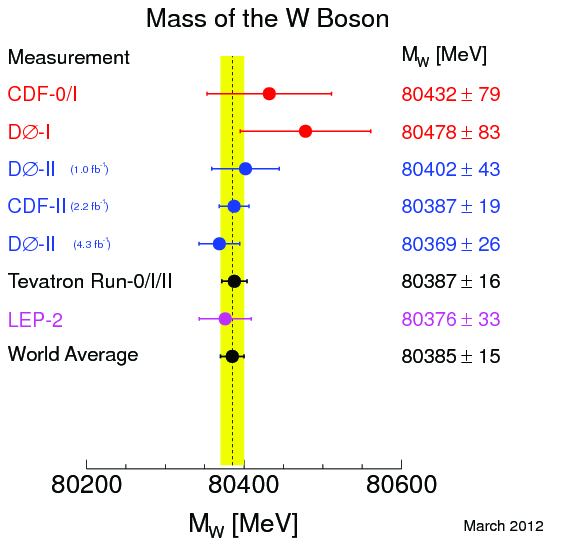 I have already written in some detail about the W mass measurement of CDF. As for the DZERO result, more succintly described here, it is based on W->eν decays only (CDF uses also W->μν decays), so the actual number of W bosons used is in the same ballpark in the two datasets. DZERO calibrates the electron energy scale using the Z->ee decay process as a "standard candle", and its measurement is thus effectively that of the ratio between W and Z boson masses. This allows the reduction of many sources of systematic uncertainties; the catch is that the accuracy is then limited by the statistics of the Z->ee sample. At a hadron collider the ratio of production of W and Z bosons is roughly three to one; in addition, the Z boson decays only 3.3% to electron-positron pairs, as opposed to the 10% fraction of W decays to electron-neutrino pairs.

It would be nice to see these measurements updated using the full data samples collected by CDF and DZERO in the course of Run II - each experiments has collected over 10/fb of data - but this is most likely not going to happen. As you add data, your statistical uncertainty decreases with the square root of the data size, but systematic uncertainties often do not behave as graciously. Furthermore, data collection during Run II proceeded in varying conditions: instantaneous luminosity kept increasing, the detector aged, triggers were modified. Accounting for these variations brings in additional systematic uncertainties, such that there is little to gain by insisting that the measurement use as much data as possible. Further, the LHC experiments are already producing their own results on the W boson mass, and these will eventually surpass the Tevatron precision anyway.

A summary of the combination of CDF and DZERO W boson mass determinations is given at this link.
A Quantum Diaries Survivor
More Articles All Articles
About