On Twitter #BlackOnCampus is a collection anecdotes of racial aggression and microaggression.  What does science say? What is the context for these tweets?  I am only one person and can only speak for myself.  However, many others on Twitter are sharing their own stories of what it is like to be #BlackOnCampus.   Those who are not from the United States and those who are not black may be surprised to find out that there are still very real issues with racism.  Things have gotten better even during my life time. These days’ racial microaggressions can fit nicely into the microblog service Twitter.  We are not talking about chapters of the Ku Klux Klan on campus.  We are talking about how numerous little tiny pinpricks of racism can really drain the energy out of us.   This is not just a black problem but it is a Latino, Asian, and “wrong” class/religion or regional accent white person problem too.  Other groups are not the subject of this posting in part because I am not one of them.  It would be wrong to speak for them.

This is a science blog and it has to be said that a collection of anecdotes is not data.  According to  (Park 2014) only 49 % of white students had at least one close friend of another race.   While 74% of blacks and 92% of Latinos and 84% of Asians can say the same.   That means that 51% of white college students have personal social spaces comprised completely of other white college students.   (See this posting by Lawrence Grand Pre about the price of being that one black friend.)   According to (Caplan and Ford 2014) a study which looked across four universities interracial friendships, relationships, and racially diverse activities are objectively lacking.  For example, clubs dedicated to a racial or a cultural group few to no people of that culture actually belong to.

The first thing to know about US history from an African American perspective is just how long we were here and under some form of legal oppression.

For 85% of the history of English speaking America Black people were either slaves or oppressed by law.  Most of that time of slavery was under British rule.  The United States of America took eighty-seven (about four score and seven) years to abolish slavery after a violent civil war.  After a brief period of equality Jim Crow was imposed once federal troops were withdrawn from the southern US.   Only since 1965 have black people been completely free in our own country.   To the credit of the United states we weren’t slaves for the majority of US history. Instead our level of freedom from oppression varied with time and place.  From strict segregation and anti-miscegenation laws to de facto segregation that occurs even to this day. 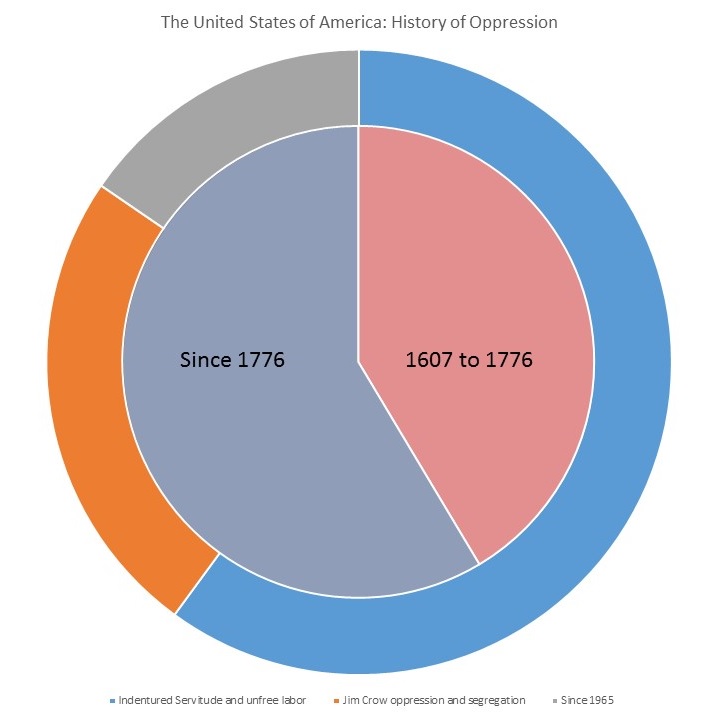 The blue band on the outside of the circle represents the period from 1620 to 1865 of Indentured servitude and slavery.  The orange bar represents Jim Crow segregation.   The grey wedge in the upper left of the pie chart is how much we have been free from de Jure oppression through laws.  What remains is de-facto segregation which no law can ethically fix.   One cannot force people to live here or there or send their children here or there.  Using income as a proxy for race ie. "low income housing"  doesn't work to combat racism.

Given the above these tweets should not be a surprise.

Quoted without comment, so they may speak in their own voice. That said, I have had many of these things happen to me too.

Feeling like a threat at 1am walking on campus because everyone avoids your side of the street... I'm coming from the lab!! #BlackOnCampus

When I was in law school a classmate asked me: "Do you students take the same tests we take?" #BlackOnCampus.

I am a faculty member at College of DuPage in Glenn Ellyn Illinois. After teaching a developmental math class I wanted a place to warm up my breakfast burrito.   Rather than walking down to the adjunct faculty center, I went into one of the faculty lounges around campus.  Adjunct faculty are of course allowed to use those in case anyone is wondering.

I swiped my faculty ID.  Then as soon as I come through the door a campus police officer that was in the room gets up and pushes back from the table.  At the same time, he reaches for his gun.  Just like something out of an old western.  He did not un holster it.   Then looking down, like he knew what he did was wrong he walked out.    No words were exchanged.  I didn’t bang on the door.  I didn’t do anything but swipe my ID to enter a room I am authorized to enter.  If that officer hadn’t had self-control I could be dead right now for being #BlackOnCampus.

My path to a MS was long and circuitous.   I attended schools on a non-degree seeking basis in part because I value the education itself but also as a try out for being there for a PhD and to build up my own credentials.   A PhD is a commitment of many years maybe as many as 10.    In larger Physics programs it is not uncommon for graduate students and undergraduate students to not mix much outside of advanced physics courses.

Then I went to DePaul University and let me say that mostly most of the time there were no problems.  However, there were times when undergraduate students I knew well and who I knew respected my knowledge would be surprised that I knew something that they had learned in class.  There were plenty of times they informed me of things I did not know.  Say things based on research they had done.  I’m talking about things that are part of any reputable physics curriculum.    I am not saying those people were racist… but it was interesting that they did not realize that of course I knew such things.  I told one just that once and they felt hurt by it.   I told someone I have a Bachelor’s degree already of course I know Schrodinger’s equation (or something like that) and they felt hurt now that’s #BlackOnCampus.

When spending time with a white woman gets you more dirty looks than holding hands with a black man that's #BlackOnCampus . ( I'm trans*).

This story is as old as the hills.  Basically I spent a lot of time with one particular ethnic white female student.   I calculate it was about 3000 hours in the space of eight months. (Three Gulf War I’s  or four years of marriage with 15 hours of non-sleeping time together per week.  Not sure which comparison is more apt.)  Most of the time studying, some of it in a group.  A not insignificant amount of it was just us working on our studies and passing the time.  There were times we would take a break for coffee or to get something to eat.  Walking a few blocks got a dirty look or two.   The classic assumption if a third white person was with us that she was there with them and I just happened to walk in the door at about the same time. Being surprised pleasantly by who accepted the idea of us being “us” to any degree and disappointed by who was hostile to it.   That relationship didn’t / hasn’t work/ed out for a number of reasons but the hostility was notable.

On the other hand, I am a well-known trans* genderqueer person in the same locale and I can walk down the street with a black man hand in hand or arm in arm.  No ambiguity, not trying to or caring if I pass, and I assume not passing for a woman, in just about any neighborhood without a problem.  Couldn’t have looked “gayer” to many people. It is when you realize that being in a LGBT relationship can in some ways cause less static than an interracial relationship that you’re #BlackOnCampus.

Not that any relationship should be a problem for anyone outside unless there is a reason for it.   It was surprising.  Then about the same time the Cheerio’s commercial showing an interracial couple and the racist backlash to it hit.  For those who don’t remember it was the last straw that made YouTube and many other websites do away with comments.  Comments that many noted came from very young, college age faces.

My last tweet shows why this was all worth the trouble.

Then as faculty you get to teach and inspire minorities, women, and LGBT that is also my #BlackOnCampus story @MX_College and COD.

As a college professor I get to help others to find out what they are able to do and usually surprise themselves.

My message to young black people on campus as students.  College is like high school.  It is only four or at most five years for most people.  It seems like a big deal when you are 18-25 and in the thick of it.  It seems like a big deal when your 30’s 40’s and beyond feel like, and really are a long way off.  That long time after college is what it is for.  If you find campus is a toxic environment, try to change it if you like and if not treat it like a job.  Do your work there move off campus and live your life in the city that college is in.  That’s where real life is.  If the area a college is in is hostile, then so too is that college.  Don’t go there and expect simply being educated to make anyone, faculty or especially students less racist.   Students are after all, like you, just learning how to navigate a big diverse adult world.  Not all of them are up to it.

In real life in 10 20 30 years a few ignorant people fade away and the real values of college experiences are revealed.  Don’t forget you aren’t there just for right now but to prepare yourself for all that will follow.  You will graduate and pass into a world where if people are jerks you can just quit (or make them fire you and have to defend firing you.)   Education gives you more power to steer your own ship.

The tweets and experiences of being #BlackOnCampus simply reflect being #BlackInAmerica.  Colleges can lead the way towards social change.  Colleges are also part of the society that the people in them may want to change.  It would be best to view #BlackOnCampus as the next wave of change to emanate from colleges and universities and mitigate what the oppression 85% of our history has brought.

It is notable that I have the platform I do because of the good white man that runs this website.  He built it from the ground up when the idea of such a website was by no means a sure thing. So #NotAllWhitePeople.