According to new work published recently the TRAPPIST-1 planets could have an atmosphere hospitable to life as we know it. Could that life be intelligent and technological if it is there?  Sadly, that is not likely.    At less than 50 light years away we have had radio technology long enough that we would have heard something from them by now.  There could have been two way communications by now and there haven’t been.  The real significance of these planets is that they could be the best extra solar candidates for human colonization. (Gillon, et al. n.d.)  I also give a break down of why the habitability of multi star solar systems, as seen in a TV show like "Firefly" isn't possible.

What bodes in favor of intelligent life is that we have confirmed rocky planets, and a good idea of the possible atmospheres at the temperatures that would prevail for their habitable zone orbits.   We don’t know if these planets are more like Mars, Venus or Earth yet. 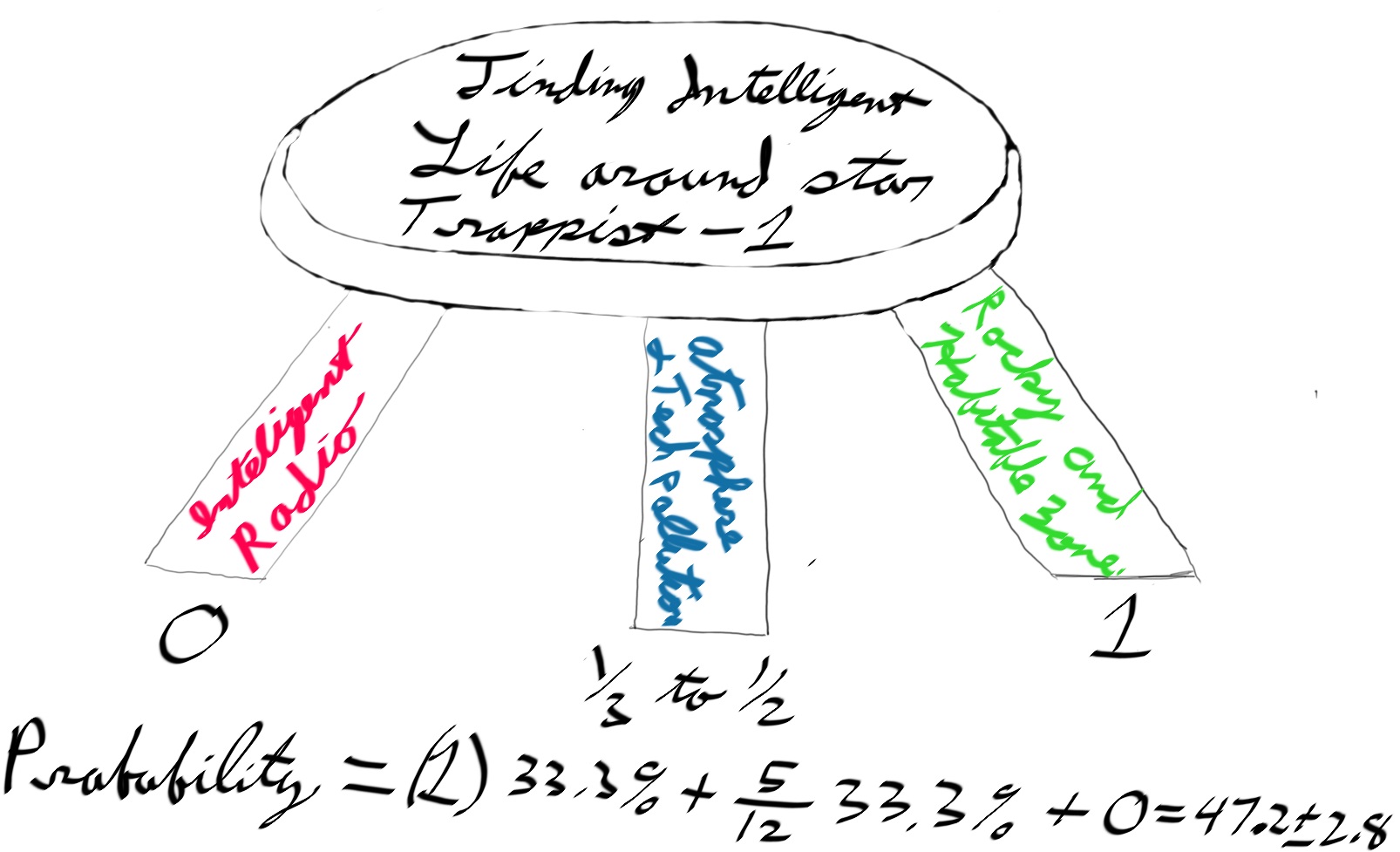 As the figure illustrates a stool needs three strong legs to stand.  Right now the case of intelligent life in the solar system TRAPPIST-1 is like a stool with two and a half legs at best.  The evidence does not support such a conclusion not even by half.   Right now what we know about those planets is that they are not hydrogen rich gas giants.   What we need to know is specifically what their atmospheres do contain.

To say we have found life, at interstellar distances, with current technology and our understanding of biology requires that the life be Earth like.  Earth like life would have a signature we could recognize.  Life as we don’t know it could be right in our face, but since we don’t know it we would not detect it.  So we need a atmosphere that has a spectrum indicative of the mix of gasses we have here on Earth.  This is a mix of gasses that is not likely without life.  Finding an oxygen rich atmosphere with certain amounts of carbon dioxide, methane, ammonia etc. would indicate life.    Finding such an atmosphere with added impurities and complex carbon molecules similar to ones we use in our technology would indicate intelligent life, even if that life did not yet use radio.

That said, without some signs of radio technology being used we can rule out intelligent technological life.  Radio requires an understanding of the electromagnetic force.  It is likely that any civilization that develops will for a time use radio for long range communications exclusively and even if they had most of their planet wired with fiber optics would still use many weak transmitters for short mobile point to point communications.  A well-developed civilization would use long range, high power transmissions for one thing that no wire can substitute for …. High speed data links between the home planet and colonies on other bodies in their own solar system.  It is possible a civilization could use some form of laser technology for this, but radio would likely still be part of the mix of technologies they use.  (Similar to how we use cable and satellite TV on Earth.)

Distance is Key to this case.

The fact that the TRAPPIST-1  system is 40 light years away means if there was a civilization there blasting out radio signals we would have heard them by now.  They would have been able to watch the “Beverly Hillbillies” and “Barnaby Jones” by now.  We would’ve seen their broadcast of “Quizblorg Quizblorg” by now.   We would have at least some non-random noisy static filled signal from them.

Yes, it is possible that a civilization could completely replace radio with an optical laser based transmission technology.  There are just some applications where the Omni directionality of radio would not be replaced.  Even many small low power transmitters would result in a periodic variation in the white noise from such a solar system which would correspond to an Earth like rocky planet with a reasonable day length.  For the planet to be Earth like it would have a variation of land and water.  When the continents are facing us we would see more noise when the oceans faced us we would see less noise.   If SETI has looked for these kind of indications and not found them that’s good enough for me.  If they have only looked for the “Hailing signal” on the 21 cm hydrogen line, a “tuning fork like signal” which would indicate a purposeful reach out to us.

To put it more directly there is a 57.3% chance there is nothing more intelligent than a beaver or a whale living around Trappist-1 if there is anything there at all.

It’s not as if we have sent a probe to look at that solar system up close.   So, anyone who says the chance is less than 1% or anything like that, as if this stars was chosen at random, and the data we have did not exist, is not doing good science.   Good science assumes little, and has strong reasons for assumptions.  The fact that there are rocky planets there and they are in the habitable zone and the atmospheric study that has been undertaken mean something.

Without any radio data, even an incidental reception from 40 light years away, we can be pretty sure there is no intelligent life there.

At least not until we humans colonize the place.

A word on intelligent life, even being transplanted, in a multi star system, a la “Firefly”, as opposed to a single star system like TRAPPIST-1.  We are not likely to find even one habitable planet in such a solar system (Like this)  and for reasons of orbital stability it would not be wise to move there. (Worth and Sigurdsson n.d.)

While we have found some stars with planets in the orbital stability zones of such star systems.  Finding just the right combination for both orbital stability and habitability even with terraforming is not likely.  It would be more like a bunch of planets orbiting one star much like our own solar system with other stars orbiting a significant distance away.  At closest approach at least hundreds of times the distance from the Sun to the Earth.   Much more like several very close by solar systems than one big solar system.  Consider Alpha Centauri A and B along with Proxima Centauri.  That is the closest real life analogue for such a system and so far there are no confirmed, not retracted, detections of extra solar planets in this system.  Not gas giants, not rocky planets, nothing.  Such are intensely sought after but so far the Alpha Centauri System, a real life “Verse” type solar system of three stars.