Andrea Kuszewski
When we last spoke about sex, we discussed the neurotransmitters involved in pleasure and attraction, namely dopamine and oxytocin. Now let's look a little deeper into the action of those neurotransmitters and how we can manipulate their action- to extend the neurological orgasm for as long as possible.

The dopamine-oxytocin response does not follow an "all or nothing" rule. Some stimuli will invoke a huge, quick response, and others a smaller, yet longer, extended response. There is a varying degree of neurotransmitter release depending on the strength of the stimulus, as well as how long we are in the presence of it. Remember last time- I told you that the longer you interface with a stimulus, or the more time you spend interacting with it, the greater attachment you will form to it.

The cognitive state of the brain at any given moment in time is what causes the release of dopamine, whether it is prompted by a physical or a mental stimulus. Can the brain be stimulated via tactile nerve pathways to release large amounts of dopamine? Sure. However, consider this: You can give one person two separate, yet identical patterns of physiological stimulation, and end up getting radically different subjective experiences as a result. (1) This implies that it is not just the physical act of sex that gives us so much pleasure, but how we represent that act in our mind that really has impact.

Not only can we get just as much of a neurotransmitter response from visual input or representational input (fantasies) as we can from physical input, but sometimes it can be even better than the real thing. The key to inducing that type of neurotransmitter response is the strength of the stimulus. When I say "strength" I don't necessarily mean a strong, direct stimulus, like a nude photo, for example. Yes, a nude photo will probably get you a huge dopamine spike. But it is relatively short-lived, like a quick orgasm. We can do better.

There are ways to trigger a dopamine response that may not be as high initially, but it lasts longer, thus giving you more time to interface with the stimulus, feeling that release of oxytocin as well- and making it extend for as long as possible. Why would we want to do this? To get hooked on a feeling, of course! *cue Blue Swede* Plus... we just enjoy it longer. More time spent happy = good.

So if you want to have the most prolonged neurological orgasm possible, how could you achieve that?

Let's look at some examples from photography used in advertising that are designed to do exactly that- titillate and engage the viewer for as long as possible. They employ certain techniques that aid to this goal: suggestion, ambiguity, anticipation, and telling of a story.

Here we have some visuals from Dolce&Gabbana, who are notorious for their controversial and sexually charged ads. 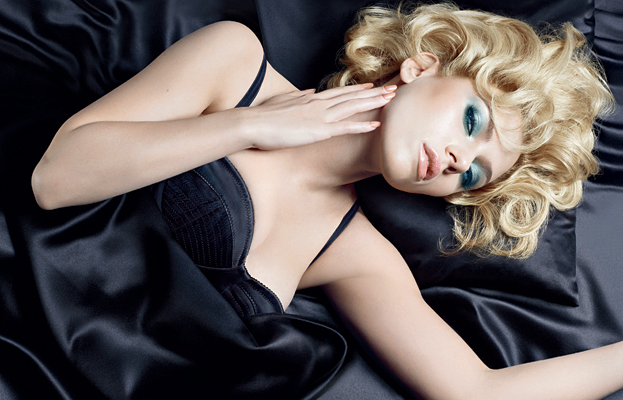 So here we have Scarlett Johansson, posing for Dolce&Gabbana, looking ravishing as ever. What is it that makes this ad so sexy and dopamine-triggering? Well, several things. First of all, she is positioned in a bed, lying down, which makes us think of sex (through learned associations). Easy enough. She also has tousled hair and appears that she has just engaged in sexual activity of some kind- brilliant.

What they did was prompt the viewer to engage in a fantasy involving Scarlett- they put all the right elements there to start the story- in a bed, wearing lingerie, pre or post copulation, and we fill in the rest. We are brought into the fantasy state, imagining the sexual scenario, and we feel the rush of dopamine and oxytocin. Now we are spending more time thinking about what she was doing, who it was with, possibly inserting ourselves in the fantasy. 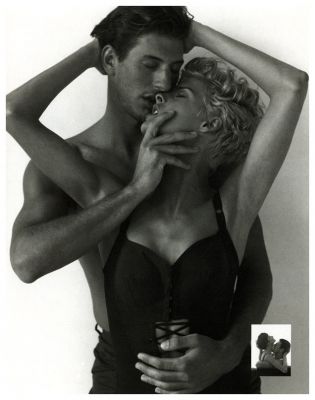 Here is another great ad that has oh, so many genius design and psychological elements going on. The couple seen here is in a romantic embrace, just about to kiss. The fact that they are about to kiss (and haven't yet) is pretty important. We are completing that sexual scenario in our mind, filling in the blanks, lingering on the subject matter. We are spending more time thinking about the subjects, feeling what they are feeling.

The longer foreplay of images prolongs the release of dopamine and oxytocin, and basically creates an extended orgasm in your brain. A blatant sexual image induces a large, quick shot of dopamine, but anticipation and suggestion of sensuality produces a much longer pleasure response. We don't want the image to do all the work for us; we want to travel down that road in our mind ourselves so we can enjoy the ride.

Why is ambiguity so arousing?

Mystery triggers dopamine. When it comes to sexual innuendo, people want to be brought up to the line as close as possible, without crossing the line. The "line" is actually the point at which it is obvious to the viewer where you are leading them (to imagine sexual activity), but you don't bring them too far, so that they miss out on the pleasure of the experience.

People also generally like feeling in control. If you give enough suggestion- without going too far- which can be a turn off, you allow them to have the illusion that they are choosing their mental path, when in reality, you are leading them there on a leash. We physiologically and mentally like the path of sexual innuendo, we want to be on that path. Yet we want to feel like we are there of our own volition.

Our brain will see ambiguous images, for example, in the D&G ads- partially clothed woman, with messy hair and parted lips. These are all images that cue sex in our brain, because we know that those elements are logical precursors to sex. When our brain picks up these cues and recognizes the "sex schema", it fills in the gaps and continues to play out that schema in our mind, living that moment chemically as well. We don't have to be living the moment physically to experience these chemical benefits; visualization- if intense enough- can do this, which is why fantasies are so sexually powerful.

Beginnings and Endings- Telling the Story

When we see an image in a sequence, we are automatically inclined to finish the sequence. Just like the nature of forward momentum is to complete a step that we begin taking, so are we mentally driven to complete a story that has been started.  When a sexual scene is pictured at a mid-point of activity, we are compelled to finish out the play, to take the elements to their logical conclusion.

The same phenomenon occurs when we are shown a series of images with gaps in the story. Film makers and video directors are masters at this. For example, in Lady Gaga's video, Alejandro (particularly at ~2:50 and beyond), never at any point are we shown actual sexual penetration of any kind.  We are shown flashes of scenes, with just enough suggestion to let us know what is going on, but enough ambiguity to allow for our brain to spend time on it, filling in the blanks. By doing this, we are brought into the story- no longer just bystanders merely watching, but active participants in the sexual scene, filling in the details to our own specification, which makes it all the more powerful.

So what are the take home points? Imagery and suggestion that is blatant and forceful may get a big spike in dopamine, but it will be short-lived. This isn't giving you enough time to feel the attachment effects of oxytocin to the fullest extent possible. The element of mystery is a trigger for dopamine- in figuring out that mystery, we are intrigued, drawn in, motivated to examine it closer. If a stimulus is more abstract and leaves a little to the imagination, you will spend more time on it, thus extending every pleasurable neurochemical process, giving you a prolonged neurological orgasm.  Bottom line? A little mystery is a good thing. Trust me- you'll enjoy it more.

To read Parts I and II:
Part I: The Allure of Asymmetry
Part II: Your Brain On Sexual Imagery

(1) Thank you to Adam Safron, Sex Researcher at Northwestern University in Chicago for his consult on this subject matter.
The Rogue Neuron
More Articles All Articles
About