Stephanie Pulford
A team of biomechanical and paleontological researchers at University of Manchester are exploring a question that teenaged dinosaur girls have wondered for years: how thin should a dinosaur model be?

Dinosaur modeling is as old as humankind’s fascination with fossils. Full-scale modeling offers researchers more than a heck of a conversation piece—a life-sized, life-weighted dinosaur replica gives paleontologists a tangible clue of how a dinosaur moved, impacted its environment, and this in turn tells us just a little bit more about how they lived.  The Manchester models are constructed from data rather than polymers, a practice that is on the rise within the paleontological community. 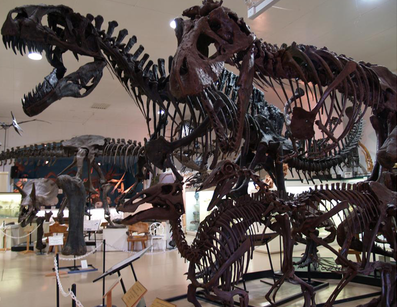 One of these things are not like the others: Bates and his team recreated the skeletons and innards of two tyrannosaurs, an Acrocanthosaurus atokensis, a Strutiomimum sedens, an Edmontosaurus annectens and a modern ostrich. The reason for the ostrich was to try to ensure that the team’s estimates for the organ weights and body distributions were reasonable; we can’t weigh a tyrrannosaurus stomach, but we can weigh an ostrich’s.

Though they’re perhaps a bit less fun to play with than physical models, computer dinosaur models offer a wealth of information about dinosaur biomechanics. For one thing, numerical modeling allows for a lot of complexity. The organs can be modeled as with realistic shapes and densities, making for more accurate calculations of center of gravity.

Because joints and skeletal dimensions are included in a computer model, they can be used to study actions such as walking and running. The details of a dinosaur’s motion can offer startling glimpses into their lives. For example, paleontologist Robert T Bakker once made waves for advocating the theory that dinosaurs were warm-blooded. One of his supporting arguments was the lack of fossilized dinosaur tail prints, suggesting a forward-leaned posture, fast movement, and the high metabolism of a warm-blooded animal.

The fat content of each dinosaur in the Manchester model was left as a variable, forming a range of likely body masses. Though there is no scientific way of guessing a dinosaur’s weight, but Bates suggests that intuition may be enough. “Anyone from a five-year-old to a Professor can see it and say, ‘I think this reconstruction is too fat or too thin’ ”.

For practical reasons, the researchers assume that the dinosaur’s actual BMI fell on the lean side. Less weight would benefit the dinosaur, and in absence of Cheetos and Law and Order reruns there would be no particular reason for Dino to pack on a beer belly.