Stephanie Pulford
The latest news on napping would have you believe that it’s a harbinger of doom.  The Research Institute at the California Pacific Medical center studied communities of elderly women and linked napping and excess sleep in general to increased death from anything. By this logic, the entire nap-happy nation of Spain should watch out for falling pianos.

The authors of this study are quick to point out that these results are not intended as a mandate for the end of naps.  In fact, research generally touts the positive effects of putting your feet up for a while.   Napping for 45 minutes was strongly linked to the retention of skills, provided those skills had been relatively well-learned during wakeful study.  This built on previous work linking napping to the digestion and reinforcement of information.  Seen in this light, the “burnout” we experience during a cram session really is the brain’s way of telling us that it is full; it needs to catch up on processing time before gathering new data.  Perhaps this explains why Einstein slept and napped up to 16 hours per day when he was working on the theory of relativity. 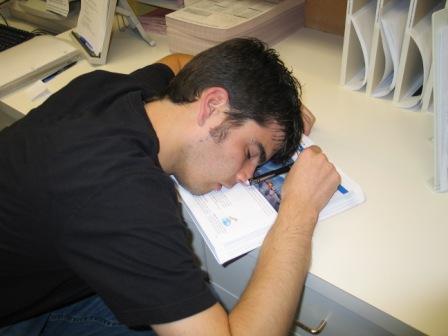 Sleep is currently classified into three stages.  The first of these is a partially conscious drowsy state, which frequently includes the muscle twitching we observe in our napping pets.  In the second stage, spikes of simultaneous neuron activity known as “sleep spindles” replace the last shreds of consciousness. This stage accounts for 50% of adult sleep, and has been associated with improved motor skills.  The third stage, deep sleep, is comprised of slow-wave sleep and REM sleep, is the stage in which we dream.

Napping offers a truncated version of a full night, with varying results.  “Power naps” of ten to twenty minutes offer a burst of stage 1 and 2 sleep; avoiding the onset of deep sleep allows the napper to awake alert and refreshed.  Naps of 30 minutes to an hour can contain a considerable amount of deep sleep.   Researchers at Harvard believe that long naps of 60-90 minutes offer comparable cognitive benefits to a full night.

Though many studies link sleep gluttony with increased mortality, researchers generally acknowledge that the correlation doesn’t tell us much about what caused either.  For example, underlying heath issues such as slowed heart rate can cause more napping; the especially high cardiovascular mortality in the California Pacific Medical Center study suggest that similar factors may have been afoot.  Related research in 2004 from the Brigham and Women’s college in Boston noted that napping and mortality may also be confounded by incidence of depression and socioeconomic factors.  Thus, reports of nap negativity should be taken with a grain of salt and a glass of warm milk.

“Enhancement of Declarative Memory Performance Following a Daytime Nap is Contingent on Strength of Initial Task Acquisition” Sleep. 2004 May 1;27(3):440-4.