Stephanie Pulford
First published in Dutch in 1976, Gnomes by Wil Huygens and Rien Poortlivet remains the definitive tome on these reticent woodland denizens.  A classic of fiction science, this lavishly detailed field notebook of the physiology, habits, and habitat of gnomes as observed over 20 years of firsthand observation.  The physician-illustrator team wastes no time in addressing questions of physiological scale:

"Because—going from large to small—the volume, and therefore the weight, of an object decreases as the cube of its linear dimension and the surface area only as the square,"

“even a fat gnome moves more easily than a man.”

“Gnomes can therefore run much faster, can jump higher, and are seven times stronger than man, relatively speaking.”

Hmm.  Huygens must’ve gotten this information from the gnomes’ press kit, because my calculations suggest that gnomes are only about twice as strong as humans, with respect to their relative weight.  The team is in clear need of an engineering consultant.  Thirty years too late, I volunteer!

Like any good lab notebook, Huygens and Poortlivet's tell me everything I need to know to pick up where they left off.  They give me the gnome's weight (300g) and provide a life-sized skeleton drawing. 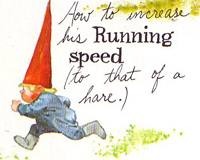 Doubtful. A European brown hare can run 45 miles per hour.  If we generously assume that the gnome’s running stride is six inches (as long as his entire body), he’d need to  run 132 paces per second to keep up with a hare.  Even if Huygens is correct and gnomes do have the “white” fast-twitch muscles of rodents, that’s quite a feat--compare this to hummingbirds, who beat their wings 10-15 times per second.  If a gnome can keep up with a hare, it can also probably fly. 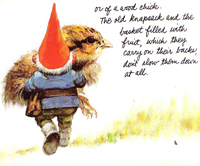 If we can carry 50lbs with reasonable ease and 100lbs with difficulty, a gnome can carry 0.3 pounds comfortably, and 0.6 pounds with considerable strain.  Baby chicks weigh in at 0.5-0.85 pounds (approximately the weight of an adult gnome!), so a gnome could probably tough it out, though I expect to see him struggle.  ATTENTION ILLUSTRATION:  MORE STRUGGLING PLEASE.  Thank you. 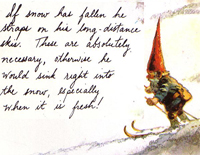 3. CLAIM: A gnome will sink into freshly fallen snow without some form of snowshoes.

This is true, but he probably isn’t in danger of submerging himself.  For reference, I looked at grouses and ptarmigans.   These birds grow their own winter snowshoes in the form of seasonal foot-spines and foot-feathers.  In 1976, E. O.  Hohn measured the pressure of their footfall and its depth in new snow both with their “snowshoes” and without.

Once again dividing a man’s footprint by magic number 158, a gnome’s footprint is about 1square centimeter and the pressure of his footfall is 300g/square centimeter.  Comparing his footfall to a ptarmigan’s, we can expect the gnome to sink 3cm -- up to his knees.  Not enough to endanger him, but definitely enough to be inconvenient.  It’ll take skis of about 5cm square to allow a gnome to walk atop the snow.  Kindly leave a few popsicle sticks out for your favorite gnome next winter. 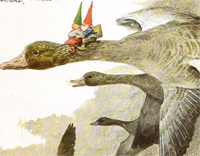 4. Claim: Gnomes can hitch a ride on a goose or a swan.

Not this way, they can’t.  Geese aren’t really made for ferrying, especially with a load near their head.  Two gnomes are about 1.2 pounds—that’s about an eighth the weight of a goose.  Never mind the extra lift required—this will move the goose’s center of gravity significantly forward, giving its nose a severe downward pitching moment.  Basically, the gnomes are going to make it nosedive.  A bird can counteract this by folding in its tail feathers, but there’s only so far they’ll fold.  Most birds that carry loads do it with their talons, which allows them to hold the weight near their center of gravity.  Think of falcons (and not swallows). 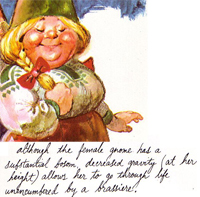 5. Claim: [Direct quote from the book] "Although the female gnome has a substantial bosom, decreased gravity (at her height) allows her to go through life unencumbered by a brassiere."

The female gnome may not need a bra, but it has nothing to do with “reduced gravity”.  (What does “reduced gravity” even mean in this context, Huygens??)  It has everything to do with physiology.  Remember, gnome cells can’t be smaller than human cells, and gnome tissue density is the same as human.  That means the weight of a gnome breast is dependent only on volume.  Breasts are held in place by the system of Cooper’s ligaments, and like muscles, ligament strength depends on cross-sectional area.

If human Cooper's ligaments comfortably support at least 300 grams, then I'm again going to divide by lucky number 158; gnome cooper ligaments support 1.9 grams.    Multiply that by a density of 0.9grams per cubic centimeter-- each gnome cooper ligament supports 2.1 cubic centimeter of gnome bosom.  This means that a gnome could happily go unsupported even if she had a bust measurement equal to her height.