Stephanie Pulford
Mechanically, walking is a complicated feat.  We take for granted that a carefree cascade of one-footed falls adds up to steady rapid locomotion.

Replicating a dynamically stable foot-over-foot walk has become a holy grail for roboticists—remember the hype about ASIMO? Researchers at Penn State are taking a shortcut to nanoscale bipedal drones thanks to to motor proteins, the walking caravan molecules within our cells.

Kinesins are a specific class of motor proteins that march along microtubules, which 25-nm  strings that move cell innards like an intricate marionette waltz. Most kinesins consist of two globular head domains which step sequentially along a microtubule, connected by “neck linker” legs to a long coiled stalk.

At the opposite end of the stalk, the kinesin’s tail adheres to the cargo. Kinesins that march with a steady, staccato pace are deemed “processive”; they are well-suited to haul cargo such as chromosomes to a set destination.

Nonprocessive kinesins pass things, like carpets of arms that allow organelles to crowd-surf.

These “legs” of Kinesin-2 have three more amino acids than those of Kinesin 1, making them longer and more compliant.  Hancock hypothesizes that the lack of ridigity reduces the efficiency of mechanical communication between the legs, making the kinesin’s steps less crisp.

Motions are automatic and the action of both legs is coupled-- the completion of one foot’s “step” frees the other foot to walk.  Kinesins are microrobots without AI-- if a misstep occurs, there’s no recovery sequence. 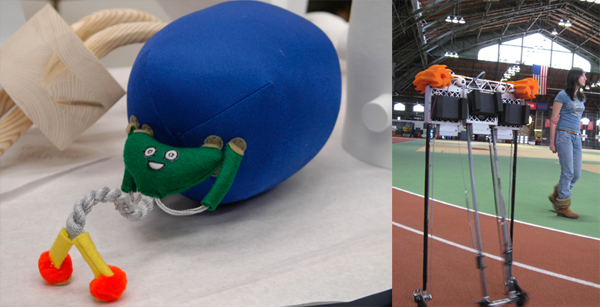 At least one kinesin function will ring a bell for anyone who remembers elementary school biology—molecular motors are responsible for towing the filaments involved in mitosis. Cancer is associated with an uncontrolled, unstable cell division, and many existing cancer therapies concern the targeting of dividing cells.  Understanding molecular motor function provides another feature of tumor cells for drug designers to exploit.

But Dr. Hancock’s group also envisions the use of kinesins for genuine microrobotic tasks. "Our idea is that you can hook up cargo -- drugs, antibodies, sequences of DNA or RNA -- and the motors would carry them through microchannels on a lab-on-a-chip type of device." They’ve already had some success using kinesins as cargo mules on manmade platforms.  When the robot revolution comes, it may be nanosized.